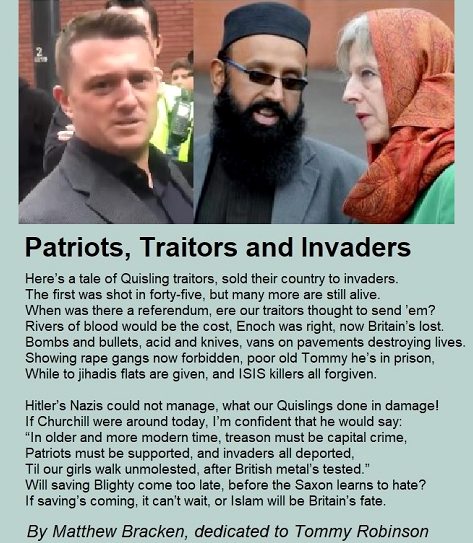 (Note: The above is an image version of Matt’s poem. See this post for a text version.)

Tommy Robinson has been imprisoned in Her Majesty’s Prison at Belmarsh. According to Seneca III, “As far as Tommy’s safety goes everything will depend on which unit he is assigned to and to which regime. As he will be serving a sentence of circa ten weeks, it is unlikely that he will be moved to another prison within that time frame and may spend it in the local prison or within the security of the main unit.” Later today I’ll be posting a longer report by Seneca III on this and other aspects of Tommy’s incarceration.

The Middle East Forum, under the leadership of Daniel Pipes, funded Tommy’s legal defense. Here’s what the MEF wrote about the case today:

Philadelphia — July 12, 2019 — The Middle East Forum again helped citizen-journalist Tommy Robinson defend himself from charges arising from his reporting in March 2018 outside a courthouse where a Muslim rape gang was on trial.

Mr. Robinson has been sentenced to nine months in jail, the culmination of the UK Establishment’s dogged pursuit of an individual with the audacity to report on the UK’s epidemic of Muslim rape grooming gangs. Although found guilty of a civil infraction he has been placed in HMP Belmarsh, a notoriously violent prison sometimes known as the “jihadi training camp.”

In this latest round, Mr. Robinson is sentenced to jail for a technical violation of the UK’s Contempt of Court Act of 1981 that allows judges to postpone the reporting of trials. However, “Worse than being selectively enforced, the Contempt Act appears to be exclusively enforced against Tommy Robinson when it comes to reporting outside courthouses,” notes Marc Fink, the Forum’s Legal Project director. Indeed, according a UK media guide:

Filming parties to proceedings as they arrive and leave the court house is also technically forbidden but in practice this rule is not enforced e.g. pictures of defendants and witnesses arriving and leaving the Royal Courts of Justice or the ‘Old Bailey’ are commonly shown.

In May 2018, Mr. Robinson was arrested, tried, convicted, sentenced to 13 months prison, and jailed — all in the course of five hours. On August 1, Mr. Robinson won his appeal, with the Lord Chief Justice of England and Wales denouncing “a fundamentally flawed process.” But the UK’s attorney general was undeterred, re-trying the case last week, this time putting on a better show trial.

The Forum most recently assisted Mr. Robinson by funding his legal team in an attempt to have the charges dismissed. In 2018, it funded, organized and staffed three “Free Tommy” London rallies and spurring Sam Brownback, the U.S. ambassador for International Religious Freedom, to raise the issue with UK officials, as well as other steps.

Mr. Robinson has acknowledged this assistance: “The political establishment here in the UK is doing everything possible to silence me solely for my views on political Islam. The Middle East Forum has been instrumental in assisting with my reoccurring legal challenges.”

16 thoughts on “Welcome to Belmarsh, Tommy”