This week’s installment of Dymphna’s Greatest Hits chronicles the shenanigans in our neighbor to the Frozen North, where cultural dementia — possibly cryogenically induced — perpetually reigns.

It makes me want to quote Shel Silverstein again:

Margo says that Rudy Felsh is a nasty vulgar kid.
Someday he’ll go to Hell or jail or Canada.

Once again, most of the links in this post seem to be dead. However, the links to Sissy Willis’ site still work.

More Than One Way to Spell Stupid

by Dymphna
Originally published on August 28, 2005

Remember how Adam was given the power — the permission — to name things? It’s in the story because we deeply understand that naming things bestows a kind of authority on the one passing out the labels. At least this is so if the label sticks, and this one ought to have glue all over it.

By now, we’re familiar with the Islamic idea of dhimmitude. It’s repugnant to the Western ideal of equality and brotherhood. Bat Ye’or has described only too well the dhimmitude of Eurabia. One prays that her predictions are too dysphorically tuned to be correct. Meanwhile…

…in Canada, they have dummitude, a neologism coined to meet the need to address the diminishing wits of our neighbors to the North. Sisu points out the latest hilarity (it’s hilarious if you don’t live in Toronto. If you are one of its benighted denizens, you might consider moving. If there is any safe place left. Ottawa has got another lock on the rapidly shrinking cultural IQ):

You’ve heard of dhimmitude — the denial of equal rights and dignity to infidels under Sharia law. Now there’s dummitude, the denial of human nature under Canadian law.

At issue is the presence in Canada of Natalie Glebova, this year’s Miss Universe. A nice coup, no? She’s gorgeous. She’s Canadian. What’s the problem? 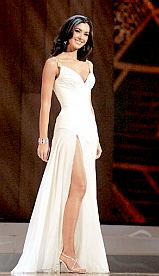 Here’s the problem. In the place where feminists and Islamicists meet — and it’s obviously not any place you, dear reader, would want to visit — beauty pageants are bad. Awarding beauty for its own sake is so politically incorrect it makes the peecee meter melt. Thus, while Miss Universe does not yet have to wear the hijab, it is against the law for her to show up at any public function in Toronto wearing her tiara and sash:

According to a city bylaw, “activities which degrade men or women through sexual stereotyping, or exploit the bodies of men, women, boys or girls solely for the purpose of attracting attention,” are not permitted at Nathan Phillips Square.

Glebova could still open the festival, organizers were told, but under strict conditions. She couldn’t wear her sash or tiara, and couldn’t be referred to as either Miss Universe or a beauty queen.

Instead, organizers were told, they could refer to her as “an individual of note contributing to our community.”

Dymphna, not given to using profanity — mainly because it could be an indication of a limited mind — had to leave the keyboard momentarily to go outside and scream “WTF???” before getting out the smelling salts for the more dignified part of her, a part equally upset at this display of dummitude. This is a particular burden since Dymphna was conceived in Toronto and takes its slide into silly irrelevance personally.

How long, Oh Lord, how long?

Hat tip: sisu. Be sure to check out the site. For the sake of brevity, some of her best analysis was left out. This blogger writes with panache; you will also find her point of view fresh and simpatico. “Dummitude” sums it up, though. We shall no doubt have cause to refer to it again.

5 thoughts on “More Than One Way to Spell Stupid”