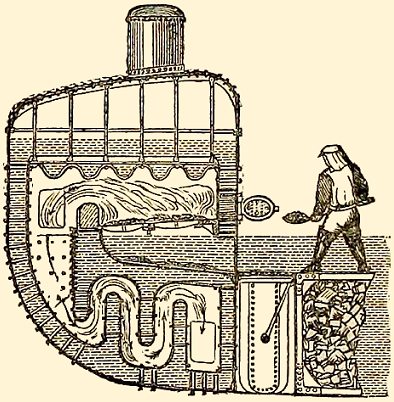 When I turned eleven I graduated from the Cub Scouts and moved up into the Boy Scouts. We lived in the southern suburbs of Baltimore at the time, and every year our troop spent a week at a BSA camp in northeastern Maryland. A week of intense heat, mosquitoes, swimming, shooting, nature study — anyone who’s been in the Boy Scouts knows the drill.

Our campsite was medium-level when it came to fixtures and conveniences. In the more primitive sites, the scouts had to dig their own latrines and cook over a campfire. In the more swanky sites there was a little electrified building with a kitchen and a dining room, and not far away a modern latrine building.

Our site was in between. We had a latrine building of sorts, and a big canopy tent with picnic tables and a propane stove for a dining hall. And for hot water we had Herkimer.

Herkimer was a massive thick-walled cylindrical tank that we used as a water boiler. It sat over a fire on four big cinderblocks, and was fed by a water pipe from a well that served all the campsites in the area. I don’t know why it was called Herkimer — for some mysterious reason, that was the boiler’s name.

Herkimer had to be fired up before every meal, because the metal trays we used as plates had to be washed in very hot water. Our troop leaders explained the need for rigorous food hygiene, remarking that a failure to run those trays through boiling water would cause the troop to come down with diarrhea — which at scout camp was not a pleasant experience, even with a latrine building less than a hundred yards away.

So three times a day Herkimer was ravenous for wood. The camp management delivered a load of junk wood every morning that could be used for the fire, but it was never quite enough. We Boy Scouts would be sent out into the woods (which our campsite was in the middle of) to fetch whatever additional wood we could find. We weren’t allowed to cut living trees, but we could take down small dead ones, pick up deadfalls, and gather whatever else we could find. We broke up discarded packing cases and threw in big thick hunks of cardboard. Anything that would burn was fair game — I remember using a shovel to root out a large stump and break it up to stoke Herkimer.

Herkimer came to mind recently when I was contemplating the enormous political and cultural upheavals that are characteristic of our time.

Let’s take a look at the running of that big old water boiler as a process. We could break it down into three parts:

There’s a socio-political Herkimer currently operating in Western Civilization. We’ve all observed the continuous onslaught against established religion, traditional customs, and cultural institutions that have been built up over the course of more than a thousand years. New rules and practices that would have been unimaginable a generation or two ago are being forced upon a populace that never desired or requested them. I’ll give some specific examples later on in this essay.

This destructive process is painfully visible in its innumerable manifestations, but teasing out the various strands of its three components is a tricky business. Nevertheless, we’ll give it a try.

What is the purpose of all this unpopular cultural coercion? The ostensible reasons — “human rights”, “diversity”, “social justice”, and so on — are obviously only the cover story. The real purpose is generally occluded, and can only be deduced by observing its myriad manifestations within our society.

The apparent goal of all these actions is lysis: the breaking down of long-established social structures. Lytic agents are being deployed throughout society to dissolve cultural membranes and connective tissue.

In the case of Herkimer, the overseers of the process — the camp management and our troop leaders — established the goal. The overseers of our societal Herkimer are of necessity less obvious. They are commonly labeled “globalists”, but a more accurate term might be “global socialists”, since socialism has always been a major component of the one-world utopias conceived by the visionaries of the blood-soaked century that preceded this one.

A new world is being built, and all the components of the old one must be disassembled before the new order can be constructed. That’s what the cultural Herkimer is for.

Lysis is administered through mass propaganda organs, the two most important of which are the mainstream media and educational institutions. Earlier models featured newspapers, radio, and television, but the Internet has recently been employed to turbocharge the process. Now that virtually every citizen possesses one or more hand-held electronic devices, lytic propaganda can be administered much more rapidly and efficiently.

Yet the Internet has also provided an opportunity for those who would resist the new global socialist order. It has allowed dissidents to network together and transmit information that the media and the pedagogues would never allow. That’s why the ferocity of the culture wars has increased so much — the New World Order is encountering a level of resistance that it neither expected nor made preparations against.

It’s only because of the Internet that you can read these words of resistance. And I would never have typed them if the old forms of media were all that existed. Nothing that I write on this topic would ever have seen publication. If I had bothered to write letters to the editor, even those would have been discarded as useless crankery.

The Internet is the wild card in the operation of the great social Herkimer.

In the elaboration of this conceit, what are the analogues of the surly Boy Scouts scrounging through the woods for firewood?

The media are the blazing hot fire of the operation. They are perpetually ravenous for fuel to achieve the goal of boiling away our culture. And, like the scouts, they are willing to grab anything handy that will burn.

Every major controversial issue has been thrown into the inferno to achieve their purpose. Climate change, normalizing sexual perversion, population replacement — all of these are simply fuel for Herkimer. That’s why it’s not a good idea to get bogged down in a long-term fight against any of the particular lytic agents deployed against us by the media and the academy. You can set up your foundation and build a website and fundraise to resist the latest media atrocity, but by this time next month there will be another one to contend with.

The media are uprooting stumps, collecting deadfalls, and breaking up old packing cases to fuel the fires of our destruction. Anything that will burn is fair game for them. It’s better to step back and understand the process rather than become absorbed in all the particulars. If we are ever to beat them at their own game, we need to understand Herkimer.

If I were to attempt a comprehensive list of examples of the workings of the cultural Herkimer, I could write a hundred thousand words and still not be done. So I’ll limit myself to two.

Population replacement is not something that the citizens of the West ever desired. They would never have approved of it, but their approval was never requested. It was simply imposed on them. For my entire adult life, opinion polls have consistently shown that a large majority of the public oppose mass immigration. Yet until Viktor Orbán and Donald Trump came along, no significant political leader ever seriously tried to put a stop to the immigration tsunami. You could vote Democrat or Republican, Conservative or Labour, Venstre or Socialdemokraterne; it didn’t matter — you got more mass immigration. On the hustings Tweedledum or Tweedledee might utter fine words about controlling immigration, but once the winner was safely ensconced in office the sausage-making began and the immigrants continued to pour in.

That’s how we know that a supra-national oligarchy is pushing for population replacement, and making sure that compliant puppets keep getting elected to implement the objective. If our Western political systems were truly democratic, mass immigration would never have taken hold. Someone with a lot of money and power has gone to great lengths to manipulate the system to make sure that the desired outcome is achieved.

The media have been tasked with collecting the fuel for multicultural Herkimer. That’s why they invented (or acquired) “racism”, “diversity”, “tolerance”, “discrimination”, and eventually “Islamophobia”. Each catchphrase is pounded into the heads of couch potatoes until they feel wicked and ashamed if they don’t hold the correct opinion about it.

The mass importation of foreign cultures is perhaps the most effective way to dissolve the traditional structures of Western Civilization and render it impotent against the imposition of new structures — all for the good of mankind, of course.

The normalization of various forms of sexual perversion has accelerated over the past fifteen years or so. Readers who are old enough to remember are asked to cast their minds back to the mid-1990s or thereabouts, when the mass acceptance of homosexuality got up its first head of steam. The initial push was for “civil unions”, which was all that was being asked for at that point. The talking heads assured us that anyone who suggested that this would lead to homosexual marriage was paranoid or a demagogue — what a ridiculous idea!

The process began with a push for tolerance and acceptance. When I lived in England in the 1960s, homosexuality was a criminal offense. Prosecutions were rare, but it was still against the law.

In the late ’60s and early ’70s the laws against homosexuality began to be repealed. With the help of the media and the schools, ordinary people became “tolerant” of sexual perversion. After another generation of relentless propaganda, a general tolerance was transformed into a mandate for civil unions, and then marriage. Anyone who frowned upon such practices was shamed into silence. And now, in Anno Domini MMXIX, the disapproval of homosexuality can cost you your job or get you suspended from school (in the USA) or arrested and prosecuted (in Britain, Canada, and Australia).

In just two generations a cultural norm that had existed for thousands of years was completely reversed. This did not occur spontaneously among the general population, but was imposed on them. The Powers That Be set the goal, and the media went scrounging for fuel to throw on the fire under Herkimer.

As soon as the last barrier was breached — after homosexual marriage had been enacted, and homosexuality made normatively better than heterosexuality — then the battle lines were drawn for the war over the tolerance of the next perversion: pedophilia. I had always thought bestiality or incest would be next in line, but it appears the child molesters will have the first go.

Making sexual perversion normative is second only to mass immigration as a lytic agent against traditional cultural forms.

A brief word about the Frankfurt School

The processes described above (plus many other lytic agents) were devised by the founders of the Frankfurt School in the 1920s and implemented in the decades since by their ideological heirs during the Long March Through the Institutions. The origins of the cultural destruction that is unfolding today is an interesting historical topic, and well worth studying.

However, it doesn’t really matter where it all came from. I’m more interested in the process of its implementation in the here-and-now.

Next week I may learn that it was the New York Yankees rather than the Frankfurt School who came up with all this pathology, but that won’t make any practical difference to my work. Whether Adorno and Marcuse or Mantle and Maris thought it up, it’s still the same old Herkimer.