With the European parliamentary elections rapidly approaching, and after today’s reports that Prime Minister Theresa May will seek a vote in the House of Commons on a second Brexit referendum, Seneca III sends these thoughts on the apocalyptic state of affairs in Modern Multicultural Britain. 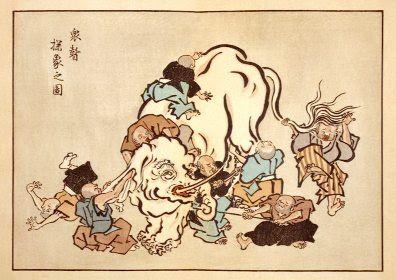 The Blind Men and the Elephant in the Room

The global war of minds continues unabated in virtually every sphere of our lives, always under the dark shadow of the elephant in the room.

For example, four top Western generals recently met at Sandhurst to debate items that change the essential character of war: the utility of autonomous weapons, the possibilities of pharmacological enhancement of soldiers, and the enduring importance of deception. It is reported that the discussion was held in a context in which each of them indicated the tension between military advantage and ethical constraints.

Why anyone would think there should be ethical constraints in a war against global Islam, which does not recognise such restraints in any way at all, is beyond me. The purpose of war is to ensure one’s own survival, and only total war seen through to victory can guarantee that. But, as always, at the end of the day policy is determined by politicians, as determined by their interests and those of their financial backers, not those of the body politic they were elected to serve.

In Westminster the current malignant proclivities of our parliamentarians, all of them, reminds me of a Wagnerian opera, where just before the gods marched into Valhalla it was said that it would end in Götterdämmerung… the destruction of the gods and of all things in a final battle with evil powers. The ongoing persecution of elderly veterans from wars long gone, wars which they were sent to fight according to the policies of the government of the day, is a living example of this process.

Thus, a problem I now foresee is that when the reality of their failing position and future prospects finally sinks in, the political classes will throw to the wind any sense of probity and decency they may have left and adopt a scorched-earth policy on their way out, doing even more damage to our democratic processes, our national security and the integrity of parliament than they already have, and leave us with nothing but the elephant in the room — that is why men and women of the indigenous ethnic majority must be able to decide on their own values and priorities and negotiate with others of the same to mutual benefit. When negotiation with invaders and their enablers is no longer an option, when that collection of deconstructionists is irrevocably determined to prevail in its interests alone, irrespective of ours, another dynamic enters human affairs from stage right.

That essential dynamic, freedom, is, above all other things, the most expensive, for it requires of us a willingness to confront those who would deprive us of that freedom — these days under the guise of ‘refugee’, asylum seeker’, ‘human rights’, ‘multiculturalism’ or those other moronic epithets bandied around with manic ferocity when anyone has the temerity to question the veracity of this evil nonsense — ‘Fascist!’, ‘Far Right’ and ‘Racist’. This is what unavoidably places us in the forefront of the battle ready to fight them to their death, for on that path is found the only way we can pass what is left of our freedom on to our children and grandchildren with any sense of surety.

Let there be no doubt about it — a willingness to risk sacrificing oneself for the greater good is a tribal survival trait that evolution has hardwired into our DNA for good reason. If we, in our current state of affluent moral and cultural decay, cast that eternal gift to the winds, we do so at our ultimate peril. Our tribe will thereafter cease to exist.

So how has this come about, you may be asking? The answer is the moral and cultural depredations of that insidious mind-worm Political Correctness. For example, I have for some time noted that Farage and TBP (The Brexit Party) are often excoriated in certain patriotic media for not mentioning or openly opposing Islamisation in any or all of its primitive manifestations in the UK and throughout Europe. Such critics are not thinking clearly nor with any deep understanding of how the ‘Long March Through the Institutions’ has made truth and fact not only hard to find but impossible to publicly debate, because freedom of speech no longer exists. To broach that subject now would be political and social suicide. The cacophony of screeching, wailing, tears and demonisation coming from the metropolitan chatterati, the brainwashed infants of academia, the police-supported Antifa thugocracy and the traitors in parliament would render any calm, rational dialectic an impossibility.

In the current UK Politically Correct climate it is not a matter of what is said, but of what cannot be said or even alluded to. ‘Current’ is the key word here, and a manumitted future must wait a little while longer… but only a little.

However, there is evidence that those who support TBP, as well as many supporters of different parties, may have their own perspective on this matter, and that perspective frequently manifests both openly and obliquely in many online comment sections and private conversations. There can be no doubt that the Muslim problem transcends all other concerns in the long run, and just about anybody with more than two neurons to rub together understands, even if only at a subliminal level, that sooner or later it is going to have to be neutralised or removed with extreme prejudice and total ruthlessness.

Thus, patience and one step at a time should be everyone’s watchwords in the short term, because this survival fight is going to be a long campaign and each battle therein must be fought and won (with whatever weapons are available or quickly manufactured) in the isolation of its specific time and place, never forgetting the elephant in the room… whatever label is put on it, whatever excuses are put forward to ameliorate its depredations, no matter how many spurious ‘deradicalisation’ projects are set up to bleed the public purse to no avail, it remains Islam in all its primitive, brutal, atrocity-riven grotesquery. Everything else is a chimera depending on individual perspectives, as Saxe so eloquently put it in his poem ‘The Blind Men and the Elephant’, below.

It was six men of Indostan
To learning much inclined,
Who went to see the Elephant
(Though all of them were blind),
That each by observation
Might satisfy his mind.

The First approached the Elephant,
And happening to fall
Against his broad and sturdy side,
At once began to bawl:
“God bless me!—but the Elephant
Is very like a wall!”

The Second, feeling of the tusk,
Cried: “Ho!—what have we here
So very round and smooth and sharp?
To me ‘t is mighty clear
This wonder of an Elephant
Is very like a spear!”

The Third approached the animal,
And happening to take
The squirming trunk within his hands,
Thus boldly up and spake: “I see,” quoth he, “the Elephant
Is very like a snake!”

The Fourth reached out his eager hand,
And felt about the knee.
“What most this wondrous beast is like
Is mighty plain,” quoth he;
“‘T is clear enough the Elephant
Is very like a tree!”

The Fifth, who chanced to touch the ear,
Said: “E’en the blindest man
Can tell what this resembles most;
Deny the fact who can,
This marvel of an Elephant
Is very like a fan!”

The Sixth no sooner had begun
About the beast to grope,
Then, seizing on the swinging tail
That fell within his scope,
“I see,” quoth he, “the Elephant
Is very like a rope!”

And so these men of Indostan
Disputed loud and long,
Each in his own opinion
Exceeding stiff and strong,
Though each was partly in the right,
And all were in the wrong!

So, oft in theologic wars
The disputants, I ween,
Rail on in utter ignorance
Of what each other mean,
And prate about an Elephant
Not one of them has seen!