The European parliamentary elections are coming up next weekend, and it looks like Nigel Farage’s Brexit Party will all but run the table when Britons choose their new crop of MEPs. But where does Mr. Farage stand on the issue of Islam? Michael Copeland’s new essay takes a look at the topic. 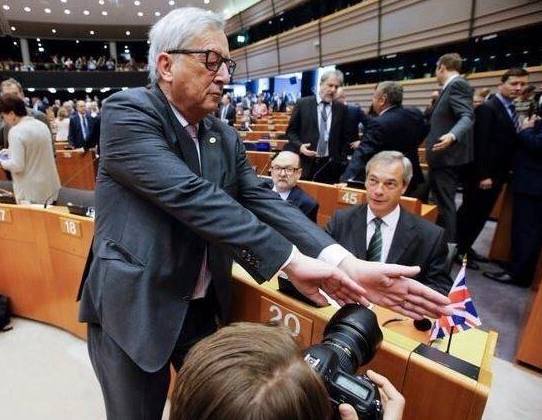 Nigel Farage is remarkable. He knows his EU subject matter completely. His assessments are perceptive, his responses quick, forthright, and to the point. He is not afraid to speak his mind. The British like that. He has worked hard and persistently over the years after founding the United Kingdom Independence Party, UKIP.

It is very largely due to Farage that the British people have been made aware of the undemocratic nature of the EU. He has exposed the fact that its leaders are not elected but appointed by each other, that they cannot be dismissed by the voters, and that the European Parliament has no power to introduce legislation, but is given only the role of endorsing what the unelected leaders supply to it. He has left UKIP. At a time when British voters have hugely lost confidence in the traditional main parties, his newly-formed Brexit party seems likely to sweep the coming elections for the European Parliament. It is a testament to his leadership.

There is one important area, however, where Farage is not an authority, and that is Islam. Robert Spencer, a considerable expert on Islam, writes:

No politician today can afford to be in that position. The danger is too great.

What “we absolutely must do”, insists Mr. Farage, is to “get the vast majority of muslims on our side against the bad guys.”

No deal, Mr. Farage. Learning curve needed. The “vast majority of muslims” are not available: Islam has walled them off: they are only permitted to be on Islam’s side and to do what Islam instructs. There is no mileage in that stratagem. It is a dead end. Muslims are not allowed any leeway by Islam’s rules. The doctrines set out in the texts are neither negotiable nor optional. Control is total:

It is not for a believer, man or woman, when Allah and His Messenger have decreed a matter that they should have any option in their decision. (Koran 33:36, part of Islamic law)

Muslims are not permitted to choose: they are instructed, and they have to submit. The word Islam means “submission”. There is no room for conscientious objection. Dr. Salah al-Sawy, the Secretary-General of the Assembly of Muslim Jurists of America, issued a ruling, or fatwa, citing the above verse:

For things which have been stipulated in the texts of Islam, the [Muslim community] possesses no power except to acknowledge and obey.

No one can regard any field of his affairs as personal and private… the Islamic State bears a kind of resemblance to the Fascist and Communist states.

There is no private conscience in Islam. The Egyptian sheikh Yassir al-Burhani makes this clear in an interview:

For example, is it the right of the Muslim to convert to Christianity or another religion?

Anyone who does convert or leave Islam becomes an apostate, whom Islamic law commands muslims to kill. A teenage schoolgirl in Saudi Arabia converted to Christianity. Her father’s response was to cut out her tongue, lecture her on the Koran, then pour petrol over her and burn her alive. There is no penalty in Islam for killing an apostate. In addition, under Islam’s rules a father who kills his own daughter faces no penalty (Manual of Islamic Law, o1.2(4)). The rules are uncompromising. Thus is Islam held in place — by fear.

Mr. Farage subscribes to the view that Islam is Nice and Peaceful, but that a small minority of “bad guys”, the “Islamists”, have got it misunderstood, warped, twisted, perverted, misinterpreted, and so on. This has been a long-running red herring, a deliberately introduced deception, that has duped many a politician.

No, Mr. Farage, “Islamists” are an invention for the West. The Manual of Islamic Law, Reliance of the Traveller, has no mention of Islamists. The word is an artificial construct devised to draw attention away from Islam itself. The dishonest message is that Islam is peaceful and spiritual while the “Islamists” are political. This is taqiyya, Islam-approved deception. It features as “Permissible Lying” in the Manual of Islamic Law, r8.

Islam is not restricted to private conscience.

Islam is not a ‘religion’ in the sense this term is commonly understood. It is a system encompassing all fields of living. Islam means politics, economics, legislation, science, humanism, health, psychology and sociology.

The “system” of Islam is promoted as not just perfect, but as the ONLY permissible political system. It is total, its laws inflicted on everyone, including non-muslims, by violence if necessary.

“Does Islam, or does it not, force people by the power of the sword to submit? Yes!” — Osama bin Laden

No, Mr. Farage, Islam is severe and uncompromising. Your “bad guys” are not “bad” at all. They are obeying Islam’s murderous commands. They are being dutiful and observant, going by the book. The book is, of course, the Koran. Quite unlike the Old Testament, the Koran has a very significant status: its text, all of it, forms part of Islamic law. No-one may alter any part of it: “None may change his words” (18:27). No-one may disregard any part of it. One who denies any verse instantly ceases to be a muslim and has to be killed as an apostate (Manual of Islamic Law, Reliance of the Traveller, o8.7(7)). The killing can be performed vigilante-style by anyone, and is penalty-free “since it is killing someone who deserves to die” (o8.4). Control is total.

Farage insists that we must not think that we are at war with the entire religion. But what, Mr. Farage, are we to think about the Muslims who consider themselves and their religion to be at war with us?

The problem is actually larger than that: it is not that some muslims “consider themselves” to be at war. All muslims are instructed to be at war by Islam’s doctrines. Islam teaches that the world consists of two realms, Dar al Islam, the Realm of Islam, and Dar al Harb, the Realm of War. Al Azhar madrassa in Cairo instructs that Islam imposes “a permanent war institution” against non-muslims, the kafirs.

All this is standard Islam, Mr. Farage, as prosecuted in 1400 years of jihad conquest, slaughter, slavery, subjugation and extortion. The “vast majority” of muslims are irrelevant: they do not decide Islam’s rules.