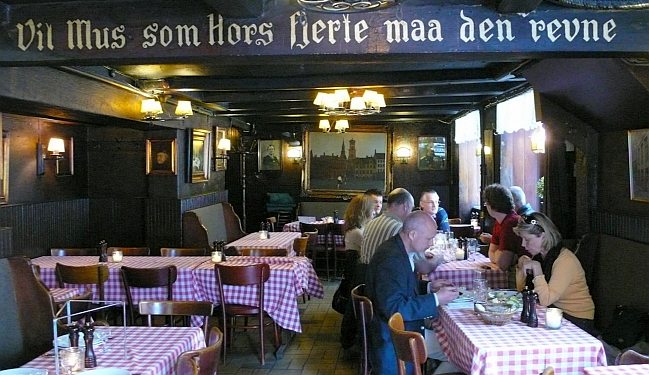 I woke up this morning to find this comment by a Dane posted on last night’s news feed:

I thought you may want to know; not sure where to post this, so here it is anyway: This morning, Steen from “Snaphanen” in Copenhagen, Denmark was picked up by six police officers and taken in for questioning in handcuffs, and his computers, hard drives etc. seized. Allegedly for linking to links from other links to links eventually leading to a video of a beheading.

Shakespeare was right. There IS something rotten in the state of Denmark.

I took a quick look at Steen’s Steen’s blog. He has posted — using a borrowed computer — about what happened. He’s not the only one who was rounded up this morning; evidently this was a big day for cracking down on “Islamophobes” in Denmark.

In Denmark! I thought Denmark was different, but evidently not.

This is the closest to home the repression has hit. Elisabeth Sabaditsch-Wolff was prosecuted and convicted, but she was never arrested, nor did she have her computers seized. This is the first time a good friend of mine has been handcuffed and taken away to help police with their enquiries.

I spent many enjoyable hours in Steen’s company on several occasions a few years ago. He put me up in his apartment and introduced me to a number of Danish dissidents, including Lars Hedegaard. Steen is a superb photographer — that was his primary pursuit before he took up Islamophobia. He took the photo at the top of this post in happier days, when I was in Denmark back in 2009, enjoying a meal at a restaurant with a group of Scandinavian dissidents. You can see me sitting at the far end of the table.

Below the jump is a machine translation of Steen’s post, adjusted to the extent that I could manage it. The mention of “Joseph K.” is a reference to Franz Kafka’s novel The Trial:

Arrested, interrogated and out of office

Have just been called by a politician who was arrested at 6:45 this morning (Hedegaard) “This morning was arrested by four detectives, computer was seized and home searched.” (NB’s leading candidate Jeppe Juhl)

At 6.30 this morning I was awakened by five or six police officers who searched my home for an hour. When it came to my sleepy head what was happening, my first thought was, because I was not conscious of having done anything criminal: “Someone must have slandered Joseph K., for without knowing of having done anything bad, he was arrested one morning.”

I was charged with a charge of roughly the same thing that Jaleh Tavakoli [Iranian-Danish woman who lost custody of her foster children] is said to have done. I must have linked to something that linked further that linked to the mentioned beheading video from December.

After being a photographer for more than 50 years, of course I know well Section 264 d of the Criminal Code. It is a perfectly reasonable paragraph, depending on how it is used, well to notice. This application of it resembles overkill and it signals panic among the debating classes. Here in the eye of the hurricane it is rocky, I can tell my friends. There is not even an election campaign fever, but you can wonder why this is happening right now. It’s two months since Jaleh Tavakoli and thirteen others were charged.

It’s four and a half months since my ‘crime’, so exactly how many links there were, and whether there was a video at the end of the link chain at all, I wasn’t aware of standing up. Sharing something has become a rather advanced legal definition. Therefore, I could not admit any guilt.

I was put in handcuffs and driven to the concrete slab called Bellahøj Police Station and locked in a cell of nine square meters, without belt or laces. I had DNA, photo and fingerprints taken and was locked in again. Then I was questioned and signed the document. All the officers behaved properly and professionally, and I tried to do the same. There was nothing to say to them; it is higher up in the system where someone is not quite well-kept at the moment.

Of interest to Snaphanen and readers is that the police have seized all my computers, hard drives and SD cards and will have them for some months. This is written on a borrowed Chromebook. I have an appointment with Steve Bannon and friends in Oslo this weekend, and will endeavor to get something done from that meeting, but otherwise I can’t say anything about the release rate in the near future. I have to improvise without writing tools. It is not so good for what is going to be a turbulent election campaign.

Lars Hedegaard writes that a politician he knows has experienced the same thing I have this morning: Now the hunt for Islam critics is underway. It turned out to be New Borger’s leading candidate, Jeppe Juhl.

14 thoughts on “Crackdown on Islam-Critics in Denmark”