As an appropriate follow-up to tonight’s panel discussion from Israel, Henryk Broder writes about the shameless exploitation of Auschwitz by German Social Democrats.

Many thanks to JLH for the translation from Mr. Broder’s website:

Auschwitz and the SPD

The fantasy land of German social democracy is located in southern Poland, about 70 kilometers west of Cracow and about 40 kilometers southeast of Katowice. The geographic coordinates are: latitude 50°02′03″ N and longitude 19°12′37″E, 232 meters above sea level. The place is called Auschwitz, alternatively Oswiecim, and was designated by UNESCO as a World Cultural Heritage Site. 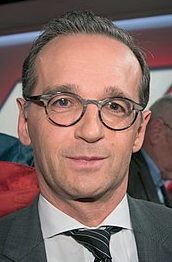 For over a million people, Auschwitz was a final stop and a mass grave. For Heiko Maas,[1] it was a factor that decided his choice of profession. He had, says the minister, “entered politics because of Auschwitz.” Actually, he entered politics because his second state law examination was so bad that he had no chance of being appointed as a state’s attorney or a judge — not even in Saarland. So he became a politician. Because of Auschwitz. Give me a break!

Sigmar Gabriel[2] did not enter politics because of Auschwitz, but because of his father, who was a Nazi, as Gabriel admitted unasked. It is seen as the metaphorical equivalent. As his father is for one of them, Auschwitz is for the other. And Gabriel, too, refers often to that German symbol of longing. At a fundraiser of the German National Foundation for the European elections, he said it “was exciting” to participate as the continent was being shaped. And that it was “a ray of hope that, in a time full of conflict, we have managed to come from Auschwitz to Maastricht in less than a generation. I find it a genuine miracle that we have come from hostility and genocide in less than a human lifespan, to become first partners and then friends. That is the real miracle of the European Union’s guiding light in an otherwise grim world.”

Yes, he really said that — the big baby of the SPD — and with a facial expression as if he had just discovered that there had been a short circuit in his playroom, where he had spent so many happy hours. Similarly, for Maas and some bards of the SPD, Auschwitz is not the last stop, but the light at the end of the tunnel, a start, the beginning of a better world. The people who died in this place did not die in vain. The gods heard their cries for help and made possible a direct connection from Auschwitz to Maastricht. And now, according to the subtext, if we don’t watch out, we will be going back to Auschwitz.

Gabriel is nuts, to say the least. What he is doing is covered by paragraph 168 of the criminal code[3] and is “punishable by up to three years’ imprisonment or a financial fine.” Or a long weekend in Greifswald with the youngsters of Feine Sahne Fischfilet [German punk band] in company with Robert Menasse [Austrian writer known for themes of loneliness and alienation] and Heiko Maas.

PS — small additional note: It was wacko Gabriel two years ago who wrote in a short essay for Frankfurter Rundschau: Social democrats were, like the Jews, the first victims of the Holocaust. Some were victims of political persecution, others of racist madness. The text was later quietly corrected to be even worse. Details here www.deutschlandfunkkultur.de/umstrittene-holocaust-aeusserung-geschichtslektion-fuer.1013.de.html?dram:article_id=384723, here www.juedische-allgemeine.de/politik/sozialdemokraten-und-opfer/ and here www.deutschlandfunk.de/holocaust-vergleich-djv-kritisiert-heimliche-aenderung-auf.2852.de.html?dram:article_id=384792.

9 thoughts on “Auschwitz and the SPD”