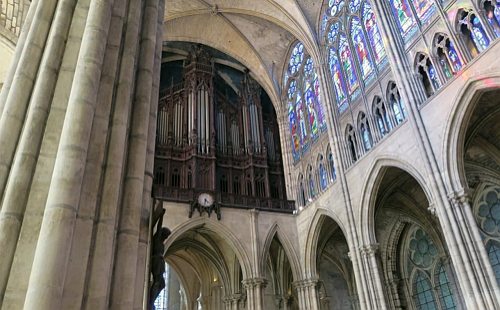 Vandalizing and torching churches has become a popular pastime lately in France. The ethnicity of the perpetrators is often unknown, but one always suspects that cultural enrichment plays a part.

Which is definitely the case with the recently-arrived Pakistani who left his DNA while vandalizing the Basilica of Saint-Denis. Oz-Rita has translated an article about the appearance of the “youth” in court.

St. Denis is nearly exclusively inhabited now by Arabs/Muslims/Blacks — a no-go zone. The Basilica of Saint-Denis is the final resting place of the Kings of France.

The translated article from Le Parisien:

Saint-Denis: the alleged vandal of the Basilica will be judged in May

[Photo caption: The accused is suspected of damaging two doors, several stained glass windows and the organ of the Basilica of Saint-Denis at the beginning of March. LP/Gwenael Bumblebee]

A 41-year-old man appeared this Friday before the Court in Bobigny on charges of damaging the organ in the Basilica. The hearing has been postponed until May 10.

A dialogue of the deaf. “I don’t know how I’m involved in this case,” the defendant told the Bobigny court on Friday. Suspected of damaging two doors, several stained glass windows and the organ of the Basilica of Saint-Denis in March, this 41-year-old man is being brought to trial for an immediate appearance.

When asked whether he would prefer to postpone the date of his trial to prepare his defence, as provided for in the procedure, he replied that he “does not understand the French judicial system.”

Incriminated by his DNA

The 40-year-old was arrested on Thursday at the detention centre in Vincennes (Val-de-Marne), incriminated by his DNA found in the Basilica. A Pakistani national, he arrived in France two months ago and does not speak French. He has already been cautioned by the law twice for damaging property in February.

Annoyed, the president of the court suggests that “the situation is not very difficult to understand” and reiterates her question. “How can I explain if I don’t understand it?” he persists.

The magistrate ended up wondering whether he “deliberately did not understand”. The court finally decided to postpone the trial until 10 May, and to place the accused in pre-trial detention until that date.

A psychiatric assessment was ordered.

As this individual will not be solvent, it is the taxpayer who will pay yet again

15 thoughts on “The Desecration of the Basilica of Saint-Denis”