The launch of Diana West’s new book has awakened some of the controversies that surrounded her previous one. In the essay below, JLH talks about both books as they relate to the current Constitutional crisis in the United States.

News has come to us (that is the journalistic, not the imperial “us”) that David Horowitz has turned on his long-time friend and ally, Ron Radosh, denouncing him for the leftist he is/has returned to be. Horowitz is known — and respected by many — as a conservative author, founder of the David Horowitz Freedom Center, editor of FrontPage Magazine, director of Discover the Networks, a website that tracks individuals and groups on the political left, and founder of Students for Academic Freedom. Some may ask “Why?” While others may ask “Why now?” Has Radosh, like Trotsky, become a dissenter — in this case not from Stalinist Communism, but from the neoconservative creed supposedly followed by both of these friends since their disaffection from the philosophies of the Communist Left? Or has he simply been hiding out in the shadow of his illustrious friend?

I will propose a solution to this conundrum, but it requires some background. Some regular readers of GoV may recall that, in October of 2014, I wrote an essay called, “It depends on what the meaning of IS is”. The essay was written in defense of Diana West’s American Betrayal: The Secret Assault on Our Nation’s Character . It proposed, among other things, that the Horowitz-Radosh-led attacks were inspired by an adulation of FDR and a feeling of ownership in the interpretation of his story.

As Thomas Paine said in Common Sense: “…a long habit of not thinking a thing wrong, gives it a superficial appearance of being right, and raises at first a formidable outcry in defence of custom.”

This was proven true in the reception of Betrayal, which was characterized by two opposing schools of thought. One, led by Horowitz and Radosh, attacked the book for its portrayal of members of FDR’s inner circle. Since material for factual arguments against West’s thesis was sparse (not to say absent), the politics of personal destruction were required. On the other side, West and a small group of impressive defenders fought back. It was spleen and invention versus hard facts. Hostilities decreased very gradually after some intense exchanges, and the trenches grew quiet, except for an occasional salvo from Radosh or some other diehard warrior. It seemed to me that Horowitz went back to what he had been doing before, as a credentialed neoconservative. Radosh never quite gave up. 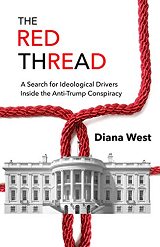 Then came the shock. Diana West — one of a minority of true reporters in a sea of what the Baron and Dymphna refer to as “jornolists” — wrote a follow-up to her historic exposure of useful idiots and actual traitors around FDR and the shaping of his post-war, Soviet-friendly foreign policy. Unlike the historic exposures in Betrayal, the events in The Red Thread: A Search for Ideological Drivers Inside the Anti-Trump Conspiracy are present, here and now. The copious footnotes rival those in Betrayal in frequency — an average of three to a page — but, because of the contemporaneity of the events, a majority of them are from online sources.

What is the “red thread”? In this case, it is the thread unwinding from the fabric of the Deep State’s war against Donald Trump and, let’s face it, against our constitutional state. West, like one of the fateful Norns of Norse myth, has tugged on this thread, showing a continuum of thought and ideology from then until now. Did you read Betrayal and ask yourself, “How could such a horror come about in the constitutional republic of America, which was indeed at the time fighting to preserve the world from the totalitarian regimes of Germany and Japan? How could it be that there were voices within our government that abhorred the Nazi threat and yet adored the Soviet promise? Did everyone forget or overlook the simple fact that ‘Nazi’ was the first two syllables of the title ‘national socialist’ — the same ‘socialist’ which appeared in the name of the USSR (the Union of Soviet Socialist Republics)?”

Diana West committed the unpardonable sin of identifying the quislings who had helped to guide American policy. The attempt at her auto da fé fizzled, because it did not ignite the spectators as expected. Now — it seems almost suddenly — we are again faced with this phenomenon. Ancient folks like me actually lived through the events in Betrayal, and most of us, like our younger compatriots, were gobsmacked by the unavoidable conclusions to be drawn from it. And here we are again, confronted with the unavoidable conclusion reached by Marcellus in Hamlet: “Something is rotten in the state of Denmark.” And it has been for some time. What was old is new again… or still.

Fans of British comedy may remember “Yes, Minister”, a series in which a recently appointed, well-intentioned, but somewhat gormless minister tangles every week with the bureaucrat whose task is supposedly to guide him through the tricky waters of entrenched custom. Inevitably, the minister’s plans founder on the shoals of stratagem and obstinacy, when they threaten some hallowed practice or privilege. We might even apply this as an analogy to our present situation, in which it appears that the unelected tail has been wagging the governmental dog.

Unfortunately, this light-hearted interpretation is only superficially accurate. There are certainly a number of people embedded in our national bureaucracy who feel entitled to the continuation of their privilege and power. But the connecting thread of this widespread and malign conspiracy is, as Diana West has revealed, not the green of money, nor the purple of power, but the red of ideological obsession. Her cataloguing of the players in the more than two-year attempted coup includes their socialist and/or communist histories and connections. Ron Radosh is worth one or two mentions. David Horowitz and his father Philip — although not major players — figure more prominently in the narrative. How errant would it be to speculate that Horowitz has not looked back happily on his part in the journalistic civil war over Betrayal? And has perhaps decided to refurbish his neocon bona fides by attacking his old compadre’s return to the New Left? Especially, since the red thread has shockingly stretched from the 1940s to now. It might be a good time to be “right” again.

As the afterword of The Red Thread says: “The anti-Trump conspiracy is not about Republicans and Democrats. It is not about the ebb and flow of political power, lawfully and peacefully transferred. It is about globalists and internationalists, just as the president says. They are locked in the old and continuous Communist/anti-Communist struggle, and fighting to the end, whether We, the anti Communists, recognize it or not.”

Some of us, like West, will fight on. Too many of us will accept whatever resolution comes from this stage of the battle, when we should be as ruthless and determined as the other side. We need to confront the doubters and those who have anti-constitutional impulses about what this country should be or become, and show them the same mercy they have showed us.