If the catastrophic fire at Notre-Dame de Paris was a simple accident, why has the French government forbidden state-employed architects to give any further interviews about the fire?

Many thanks to Nathalie for translating this article from Riposte Laïque:

No, no, no, the blaze that engulfed Notre-Dame cannot have been an accident, and here’s why:

The Ministry of Culture is said to have forbidden the architects who work for the “Monuments Historiques” [state body in charge of preserving the architectural heritage of France] to give interviews on the subject of Notre-Dame. 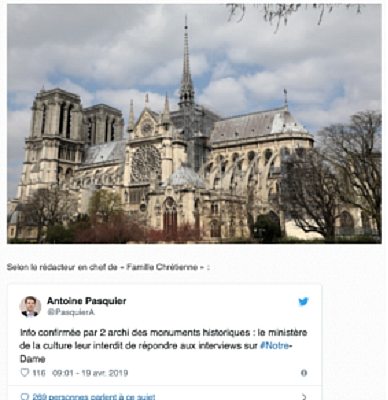 In this, our second article, we print a series of common sense questions and comments made by Yves-Marie Laulan, an economist and the director of the Geopolitical Institute.

Whilst I do not wish to embrace the wild theories of “conspiracy theorists”, I cannot but ask myself a few intriguing questions regarding the blaze which engulfed Notre-Dame de Paris.

To make a long story short, this waste of cosmic proportions is only a reflection of the utter incompetence of the religious authorities who were officiating daily in the cathedral, as well as that of the state as represented by the pleasant Stéphane Berg, a man who was supposedly in charge of the preservation of our heritage. And let’s not mention the Paris City Council and the Ministry of Culture.

This coterie of parasitical nonentities were prancing about and congratulating themselves on the day of the official inauguration, without, for one second, sparing a thought for the fire safety procedures that should have been in place in the sacred building, whose safekeeping was their responsibility.

None of them could organise a piss-up in a brewery, not that this should come as a surprise.

When all is said and done, this horrendous catastrophe, without precedent or real explanation, reflects the Wrath of God. (As the Serbs rightfully contend, who are, contrary to others, in permanent touch with Divine Power.)

On the other hand, a foreigner of a less charitable bent will conclude that the French are incapable of safeguarding their own historical marvels.