Tabitha Korol’s latest guest-essay takes a look at the plight of women under Islam. 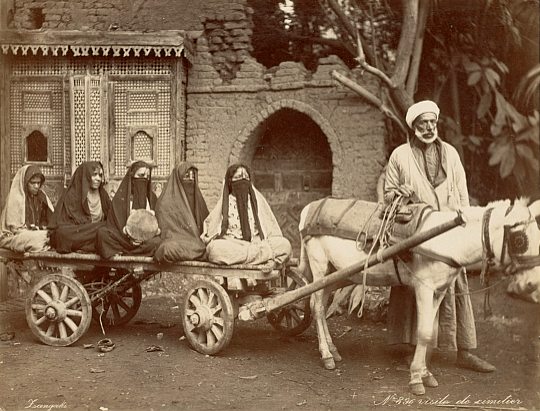 I take this woman…

The internet provides everything you’d want to know about courtships, weddings, married life, but few of them include the instructions on wife-beating. There is a brief but enlightening film, produced by the Middle East Media Research Institute (MEMRI) and posted on Jihad Watch, of a Muslim sociologist who demonstrates the “proper” wife-beating technique. Of course, the sociologist assures his audience that Islam is merciful, and that the man, the head of the household, should not have to beat his wife every day, and to do so lightly, never to hit her face or head, bruise, break bones or cause blood to flow (m10:12, Reliance of the Traveller, A Classic Manual of Islamic Sacred Law — ROTT). But the cautionary statement rings hollow when the wife’s bruises will never be seen because she must be covered from head to toe. And, should she become inured to the discipline’s sameness, there are other means of control and punishment available to him, all sanctioned by The Religion of Peace.

When is it necessary to beat one’s wife? The sociologist did posit that there are women who prefer domineering, authoritative, and even violent husbands. For the most part, however, beatings are needed when the wife has disobeyed him and the strict Islamic rules of marriage. She may have refused to wear a hijab (m:2:7-8, ROTT) or the finery he chose for her; or fancied attending school with the hope of one day having a career and earning a wage. She may have wanted to leave the house unaccompanied or without her husband’s permission; she is literally under house arrest.

The Shari’a marriage contract contains her virginity status, the dowry amount, and grants sexual intercourse rights to the male, giving him total control over his wife or wives. Should she refuse his advances, be too ill or too young to have sex, or if she engages in sex with another man or was raped, he could stop her daily (financial) maintenance. The woman is considered a she-devil, equal to a domestic animal, harmful and with crooked character. Therefore, he may disallow her to sleep in his bed; or lock her in a room, naked, and without food. Should he choose to enact a simple divorce by repeating “I divorce you” three times — she may receive no more than three months’ maintenance and could lose her children older than age seven. 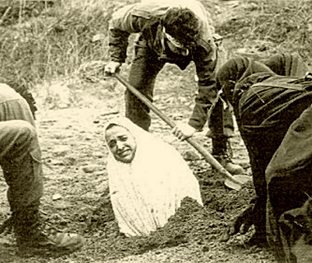 The Muslim husband has the right to accuse her of adultery, in which case he might gather his friends and neighbors together to bury her almost up to her shoulders and stone her to death. The film The Stoning of Soraya M portrays the true story of Soraya, in Iran, whose husband Ali convinced their two sons and the townsfolk that she was committing adultery so that he could marry a 14-year-old girl. The Internet has an actual film of a Syrian woman being stoned to death by ISIS. About four women per day are murdered in “stove bursts” in Pakistan, by husbands or in-laws who claim the wives’ scarves caught fire while they were cooking.

We are assured, however, that the discipline of beating, although necessary, is done out of love, and once that’s done, life can move on. But from where does this sociologist get the concept of love? Surely, not from the Qur’an, which clearly stipulates that women are inferior and may be taken by force or bought from their parents. There is no Western-style courtship — no dating, no music or dancing under the stars, and no dining in a candlelit café. In fact, there is no courtship whatsoever. Rather, a shari’a marriage is a document, usually signed at the home of the future bride, that grants sexual intercourse rights to the male with complete control over his wife or wives. The revered Muslim theologian Imam Ghazali (1058-1111) gave the definition: “Marriage is a form of slavery. The woman is the man’s slave, and her duty therefore is absolute obedience to the husband in all that he asks of her person.”

Interestingly, the marriage contract provides four blank spaces to be completed over time. Below the signature of wife number one, there are three more signature lines for future wives, numbers two, three, and four. The realization that there could be three more wives with whom she would share her husband and home immediately negates love and devotion; the religious sanction of polygamy destroys the possibility of fidelity between one man and one woman, while also increasing rivalry, conflict and stress. The message is unambiguous: “You can be replaced.” Not only does the man have the divine right to four wives, but also to “pleasure marriages.” Only he, not she, has the right to such dalliances, and only he, not she, has the right to divorce. He may even rid himself of the four he has and begin anew, with four wives plus “slave wives.”

The Islamic woman is among the poorest and most oppressed in the world, and regardless of her financial station, she is caged for life. She cannot be rescued when beaten and her husband has the right to not provide an explanation to anyone for beating her, for the Prophet has said, “A man will not be asked as to why he beat his wife.” (Sunan Abu Dawad 11:2142) This must be reassuring.

Muslim societies are based on enslavement — the enslavement of society to the state/ideology and women to men. The Saudi woman is always guilty, even if he breaks her ribs during a beating, and she is so victimized that denial of her situation is her only comfort. Muslim women are imprisoned for sexual crimes committed by men, yet Islam insists it honors women. The indemnity for the death or injury of a woman is one-half the indemnity paid for a man. (o4.9, ROTT).

In a Muslim society, the woman’s virginity is the basis of the family’s honor, and honor killings are acts of vengeance executed by like-minded family members against a female family member, for reasons such as becoming “too westernized,” refusing an arranged marriage, being the victim of a sexual assault, seeking a divorce, or (allegedly) committing adultery. The mere perception that a woman has behaved in a “dishonorable” way is sufficient reason for murder; methods include stoning, stabbing, beating, mutilation, burning, beheading, hanging, throat-slashing, lethal acid attacks, shooting and strangulation. Women’s advocacy groups suspect that more than 20,000 women are killed worldwide in this fashion each year. The UK recorded 2,823 such crimes in 2010.

Sex for the male in Islam is a plenteous buffet of alternatives, and he need never be indicted for adultery, pederasty, infant or youth pedophilia, rape, or honor killings. He even has permission to engage in sex with his wife’s cadaver within seven hours of her death. During a televised show in Egypt, Professor Sheikh Sabri Abdul Raeuf, of the Islamic world’s most prestigious madrassa, was asked if it is permissible for a husband to penetrate his wife after death (necrophilia). He replied, “It is not favorable in Islam; however Islamic law considers it as halal,” it is permissible, not a crime or sin deserving of punishment in the here or hereafter.

Men, particularly “courageous” jihadis, are rewarded with sex with perpetually exquisite virgin women, so that women are not just in competition and threatened by other women (wives) on earth, but also by supermodels in the afterlife. The Religion of Peace offers no peace to women at any time — not in infancy, not when they are genitally mutilated in childhood or married off against their will, not in their adulthood, and not even after their death. We must never allow Shari’a law to overtake our own American laws.