In my introduction to a news feed early last month I confounded some of our readers by using the word “stochastic”. In its context it meant “indeterminate”. The most commonly used synonym for it would be “random”, but that’s not exactly what it means. More on that later.

I first encountered the word in about 1970, when I was looking at the course catalog for the Math Department of the College of William and Mary. Back then Computer Science was a subdivision of the Math Department (a few years later it was elevated to the status of a separate department), so while I was browsing through the advanced math courses I came across an entry for “Discrete Stochastic Systems”, probably a 400-level course. I understood “discrete”, but I had to look up “stochastic”. In its computer context it referred to the fact that some events within a complex electronic computer are indeterminate, since they are affected by quantum fluctuations at the lowest level. One of the major tasks in the development of modern digital computers was to control for stochastic events as much as possible — via parity checks and so on.

The “discrete” in the course title referred, of course, to the fact that digital computers were under discussion. Analog computers had been fairly widespread in the early days (late ’40s and ’50s), but for reasons that are too complicated for this discussion, digital computation eventually won out and became the preferred method used in modern computers.

I duly incorporated the useful word “stochastic” in my vocabulary. A few years later I even wrote a poem entitled “The Intelligence of Discrete Stochastic Systems” (it wasn’t any good). In the decades that followed I forgot how specialized the word was; that’s how I ended up confusing the readers of the news feed.

Interestingly enough, in both of my major dictionaries (which are very old), the specialized meaning for the word is not listed. The definition given is “pertaining to conjecture”. The 1921 Webster’s lists it as “rare”, while the Oxford (more precisely: The Shorter Oxford English Dictionary on Historical Principles) says it is “obsolete or rare”.

But not anymore. Now it’s simply a geek word.

It comes from the Ancient Greek word στοχαστικός (stokhastikós), which is formed from στοχάζομαι (stokházomai, “to take aim, as at a target, or to guess”), from στόχος (stókhos, “an aim, a guess”). I don’t know how it eventually acquired its current mathematical meaning; perhaps indeterminate events were things that geeks had to guess at. The Wikipedia entry has a lot more information on stochastic processes, for those who are interested.

The most common synonym for “stochastic” (as you can see from the Wiki) is “random”, but that’s not really accurate, and I wouldn’t use it myself. I prefer “indeterminate”, or more fully: “a stochastic event is one whose cause cannot be determined.”

In my computer science courses it was drummed into us that there is no such thing as a random number in digital computing. What are commonly called “random number generators” are actually algorithms that output pseudo-random numbers. Every number produced by them is generated by a process that is totally determined, and not at all random. A programmer finds them useful to employ when it is necessary to simulate a series of random numbers.

In mathematical terms, randomness doesn’t exist. It has no meaning. Try to define it yourself — you’ll end up in a circular chain of references, without an external phenomenon to peg the word to. It’s not like “light”, or “vacuum”, or “hydrogen”. It has no meaning in a scientific or mathematical sense. It’s just a quaint linguistic relic, and is no more real than phlogiston or the aether.

What is commonly called a random event is simply one for which a cause has not been determined. Believing in “randomness” is therefore a form of religious faith, like believing in God, or Satan, or the Flying Spaghetti Monster. We are continuously bathed in events that seem random, but accepting their randomness is a leap of faith on our part.

The discipline of Statistics was devised to help understand the patterns and mathematical structures behind large quantities of “random” data. Events that may be indeterminate on an individual basis are totally predictable when a large enough quantity of data is aggregated. But data on totally determined events can also be analyzed — the behavior of thousands of vehicles on a freeway, for example, can be statistically evaluated, even though the causes of individual drivers’ choices are unknown to the statisticians. That doesn’t mean that those decisions are random, but rather that they are indeterminate from the statistician’s point of view.

Darwinian evolution is a statistical model that relies on indeterminate events at the micro level to explain the process of natural selection. However, to call the underlying genetic changes “random” is to take a leap of faith that is no different, scientifically speaking, from believing in Intelligent Design or the Garden of Eden. All three are forms of religious faith. A scientific observer doesn’t observe randomness, but only events whose causes have not been determined.

Two and a half centuries ago the paradigm of the Clockwork Universe had its day. Newtonian physics provided the tantalizing possibility that the mechanism of the universe could eventually be understood in its entirety. Given enough data, and enough careful calculation, there would be no indeterminacy left. The causes of all phenomena would be known and understood.

It was a heady time. Newtonian ideas gave rise to Deism, which posited a Creator who created the universe the way a clockmaker builds a clock. Once the clock was completed and wound, all observed processes would follow from it without any further intervention by the Creator.

Later the Creator was abandoned, and the clock just kind of came into being, with the Big Bang serving as the ultimate “explanation” for how everything eventually happened.

But the 20th century threw a spanner into all that elegant clockwork — first Einstein at the macro level, and then Heisenberg at the micro level. With Kurt Gödel’s Incompleteness Theorem, the Newtonian clockwork was finally melted like one of Salvador Dalí’s watches. Not only were some causes indeterminate, but they couldn’t be determined. There are limits to what man can know or deduce. There will always remain “unknown unknowns”.

Once the digital computer became complex and powerful enough, the science of indeterminacy could advance even further, producing what is now known as Chaos Theory. Fractal structures allow us to map the infinitely complex interface where the known leaves off and the unknown begins. The Mandelbrot set cannot be fully determined — the calculations would of necessity be infinite — but the process of approximating it produces infinitely complex structures of exquisite beauty. 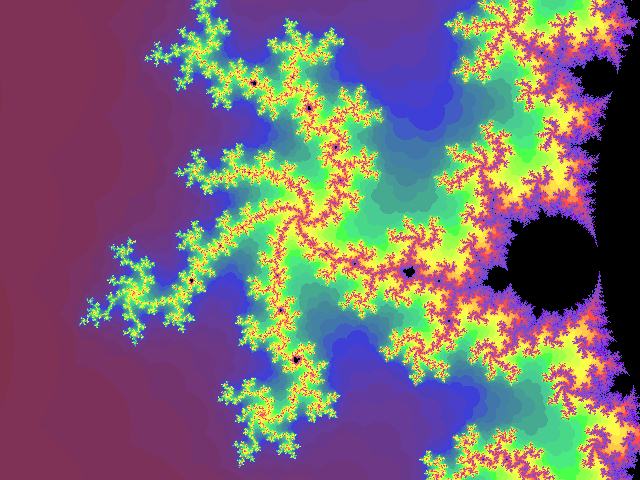 In the physical universe, it appears that the basic components of reality are the result of stochastic processes. Some of the most important constants used in mathematics and physics — for example, e (the base of the natural or Naperian logarithms) and pi (the ratio of the circumference of a circle to its diameter) — were established by quantum fluctuations during the first nano-second after the Big Bang. The geometry of the very fabric of our existence was thus created through indeterminacy. And it is not known whether a universe could even exist with other, different basic constants that might be formed by slight variations in the earliest quantum flux.

All of this leads us to conclude, per Hamlet, that “There are more things in heaven and earth, Horatio, than are dreamt of in your philosophy.” Whether terrifying or exquisite, there is so much that we don’t know and, more importantly, cannot know.

As Walt Whitman wrote in “Leaves of Grass”:

Hurrah for positive science! Long live exact demonstration!
[…]
Gentlemen, to you the first honors always!
Your facts are useful, and yet they are not my dwelling,
I but enter by them to an area of my dwelling.

One would think that a basic acquaintance with the Stochasm — the ubiquitous indeterminacy in which we all reside — would induce a sense of humility among those who contemplate it. Yet humility seems to be in short supply here in Post-Modernity; hubris is the order of the day.

We’re all aware how that eventually ends. As Robert Hunter put it in his song “Book of Daniel” (which is a gloss on the biblical original):

And when the king, your father, achieved humility
He was restored his kingdom and his sanity.
And though you knew all this to start, you humbled not your heart.
The writing on the wall commands your fall!

37 thoughts on “Humility in the Face of the Stochasm”