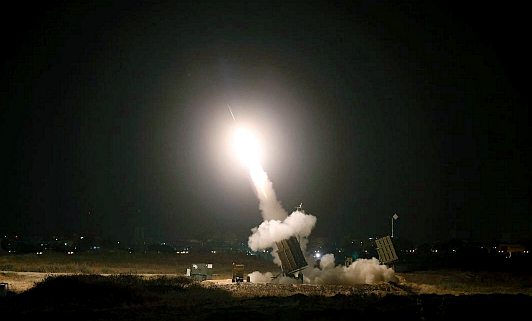 As a follow-up to his earlier post, MC sends the latest on the rockets’ red glare in Sderot:

It is 21:06, and we have just had the first Iron Dome intercept of the night. A present from the religion of ‘peace’ (the piece around here tends to be shrapnel; we oftentimes hear it coming down on the roof).

Now another ‘seva adom’ and a big bang, no Iron Dome — it may have hit the open land over the road.

Islam really is a spiteful regime. Here comes another as I write, making three, and Iron Dome is roaring away, another multiple intercept…

It is nighttime, but I can see the smoke trails overhead. The rockets are just a dot of light as they go over, then a flash and a bang or two.

The ID battery is about half a mile away, so many of the intercepts happen almost overhead.

How do I feel about it? Tense, peeved and a bit anxious. Islam does something to a person; somehow it makes one inhuman. People try to help and accommodate Muslims, but they have no grace. To be helped is their Allah-given right. It is the duty of every kafir to serve them.

One cannot deal with Muslims; they have murder and treachery in the hearts. In return for our handing over Gaza, they make a battleground of the sky above our heads.

4 thoughts on “Rockets Over Sderot (Again)”