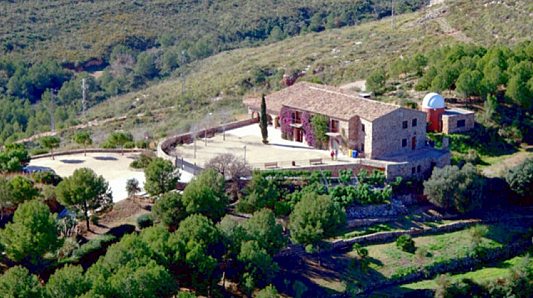 The unaccompanied culture-enriching minors in a migrant reception center in Catalonia were attacked by locals not once, but twice over the same weekend.

Many thanks to Pampasnasturtium for translating this article from the Catalan daily Ara:

Cal Ganxo, a reception center of the regional government hosting minors under its guardianship in Castelldefels has suffered this weekend a double racist attack by dozens of hooded people, who both Saturday and yesterday, Sunday, assaulted the thirty unaccompanied foreign minors who lived there and their attendant social workers, as confirmed by the regional government after the national newspaper El País revealed the information. Due to the double attack, and notwithstanding the effort by the center’s professional team to protect the kids [sic], one minor had to be taken to the Viladecans hospital, where he was admitted, due to the wounds inflicted. According to what was explained this Monday by the town’s mayoress Maria Miranda in an interview on TV3 (public-funded Catalan TV channel), the boy suffered minor trauma and is all right. The police are investigating whether it was inflicted directly by the attackers, or whether he suffered it after falling from the stairs while he was trying to protect himself. Two social workers also had to be assisted because of trauma, while the center suffered different types of damage.

The town council had the idea of meeting tomorrow with representatives of the regional government to follow up on the minors’ situation. According to the mayoress, the youngsters were hosted ‘temporarily’ in premises set up for environmental education, and that doesn’t meet the needed standards for this other function. As a matter of fact, she indicated that initially the ‘menas’ [‘menores extranjeros no acompañados‘: unaccompanied foreign minors] were to be there only for a month —December to January— but that the situation had been extended. The latest forecast, according to Miranda, was that the minors would go to a new space set up for this purpose next Friday. The mayoress will talk today to the (female) director of the regional government’s Department for Childhood and Adolescence Affairs after the events that occurred over the weekend.

The first of the attacks, on Saturday, was carried by more than twenty hooded persons. According to the explanation by the regional government in the press release shared yesterday evening, ‘A little earlier, on the same Saturday, a group of migrant youngsters who were coming back to the reception center and a group of youngsters from the town had had a row that ended with stone-throwing.’ A while after that, towards 1:15, the group, ‘of some 25 hooded persons, entered the reception center, damaged the building and tried to assault minors and social workers.’

The second attack happened yesterday in the afternoon, according to a report by the national newspaper El País, and the regional newspaper Ara [‘Now’ in Catalan] was able to confirm it. As many as sixty persons, including some of the attackers from the first day, gathered — some coordinated it via WhatsApp — in front of the reception center and started to throw rocks against the building. The quick intervention by regional police allowed the dispersal of the attackers, who ran away towards the mountain. Nevertheless, a while later they concentrated again in front of the house and the police had to act again to finally control the situation. The director of the regional government’s Department for Childhood and Adolescence Affairs (‘DGAIA’), Ester Cabanes, went to the place where the events occurred, and shortly after that it was decided to set up a permanent surveillance operation by the regional police at the door of the reception center. The department is considering moving the minors, but the destination has not been decided. The alleged attackers brandished sticks, eventually numbering up to 60 persons, and they chanted racist slogans, according to the explanation by police sources to Europa Press.

In the press release, the regional Work, Social Affairs and Families department ‘declares its unconditional rejection and most drastic condemnation of the attack,’ and its head, Chakir el Homrani, states: ‘These kinds of violent attacks have no place in our society, and they’re despicable because of being violent, intolerable because of being unfair and absolutely against the feeling of the majority of Catalan society.’ ‘This country was made by people from all over who have come during the last decade or in previous generations. People who came to work and to find a better future for their families. We are what we are because of their contribution, and of those who were already here, because of the civic and democratic sense of those who came and of those who were here already. Because we’ve decided to be a civilized and democratic society, pacific and receptive in that we don’t judge anyone by the place where they where born, or by the language they speak, or by the color of their skin,’ explains El Homrani.

The Work, Social Affairs and Families councilor adds that ‘the regional government will sue, as it has done in other cases, ex-officio against the attackers in defense of the rights of children, and, furthermore will also file a complaint with the Hate Crimes Attorney’s office’.

The hostel Cal Ganxo belongs to Fundesplai, even though it’s managed by Eduvic, and up until a few months ago environmental activities took place there. In December, though, and seeing the ‘menas’ crisis, with an increase of the arrivals and an evident difficulty in housing them (many of them slept several nights in police stations), the regional government decided to place some thirty of them in Cal Ganxo, which was then renamed Bassam Center.

Castelldefels’ mayoress explained this morning that according to the information available to the town council, what happened last Saturday was a quarrel among some ‘menas’ and a group of youngsters from the town, which moments after that caused some of the youngsters to organize and go to attack the house where the (other) youngsters were. The mayoress explained that there had already been some ‘minor confrontation’ among some ‘menas’ and youngsters from the town. Miranda has clarified that the town council condemns the events and that they’re gathering information about everything that happened, and once everything is clear, it will act accordingly. For now, though, they’re not adding its name to the complaint filed by the regional government. The association Castelldefels Standing With Refugee Persons has summoned a demonstration of repudiation of the events for tonight in Church Square.

Third attack in a week

This is the third racist attack suffered by ‘menas’ received by Catalonia in ten days. On Tuesday a man broke into a reception center in Canet de Mar (Maresme area) with a machete, and he made death threats to the roughly fifty youngsters living in a summer camp villa belonging to the mayoress and managed by Eduvic. On Thursday of the previous week, in the same town, some twenty neighbors of the municipality scolded and insulted three of the boys as the latter were returning from the library to the reception center. They accused them of the wave of house burglaries the town is experiencing, even though the Ara newspaper had been able to confirm that neither the town council nor the regional police had any evidence of complaints filed against the minors. ‘There are some racist neighbors, but it’s better to ignore them, with the rest there is lots of conviviality,’ explained Abderrahmane — one of the boys harassed in Canet — to this paper at the time. The attacks have also generated a wave of solidarity among neighbors of the town, who went to the reception center to ask what could they do to help the boys.