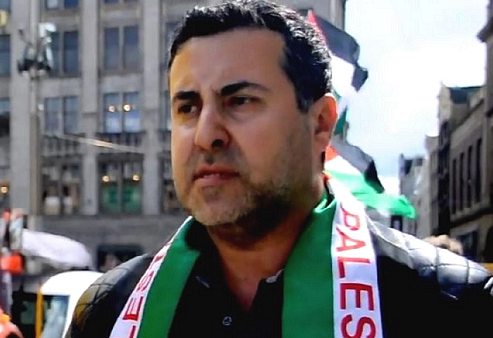 Many thanks to FouseSquawk for translating these two articles on the increase in Jew-hatred in the Netherlands that emanates from the Left and (surprise!) Islam.

The first is from De Dagelijkse Standaard:

Alarming: Anti-Semitism in the Netherlands has increased by 20% in the past year — partially thanks to the extreme Left

[Photo: Abou Jahjah with a Palestinian shawl in Amsterdam]

Becoming a good country is something we have done together. Anti-Semitism, which has never been absent, took a gigantic leap last year. Jews clearly see that they are less and less safe in this country, and especially in their immediate surroundings. The new Monitor of Anti-Semitic Incidents of the CIDI (Centrum Informatie en Documentatie Israel in The Hague) speaks frightful volumes.

Things are going bad for Judaism in the Netherlands. The tiny community that remains after the Second World War is being systematically driven away. That is the only conclusion you could draw if you read the CIDI Monitor of Anti-Semitic Incidents 2018, published today.

Last year the anti-Semitism group registered the highest number of anti-Semitism reports since 2014. And in the “immediate surroundings” category, it is the highest number ever recorded. In this, the CIDI gave the horrible example of a Jewish student who even had to change his class because his old class kept harassing him because of his Jewish background.

“For example, CIDI registered a report from a Jewish student who gets comments in the classroom and group activities such as “All Jews must die” and “Go back to the gas chambers.” The school only took action after much insistence, and the bullying only decreased when the student (at his own request) was transferred to another class.”

Much anti-Semitism was also politically motivated. Under the so-called “alt-right”, a hostile attitude towards Jews was observed, but also on the Left is anti-Semitism on the rise. We think of people such as Anja Meulenbelt and Jazie Veldhuyzen (from Sylvana’s BIJI party), but for example also the sometimes even Islamist gentlemen from DENK. The Monitor writes about this:

Not only among the extreme Right are there anti-Semitic sentiments.

Many common clichés are, for example, the “Jewish capitalist”, or simply “stock market Jew”. These supposedly control the political elite in society through the possession of gold or disproportionate power in banking.

Conspiracy theories about the Rothschilds, a banking dynasty of Jewish descent, often respond to this. The stereotypes are used as legitimization for turning the common people against the established order. With the emergence of the decolonization movement, these clichés were changed so that Jews were increasingly identified with imperialists.

The political Left often values equality, emancipation and anti-discrimination. However, sometimes the extreme Left sees inequality mainly in terms of color and social class. Because the dominant image of Jews is often that they are white and prosperous, they are, within the extreme-Left way of thinking, often portrayed as oppressors. This way of thinking can lead to anti-Semitic discourse, surely in combination with the often used implicit assumption that the Left is automatically anti-racist and thus cannot be anti-Semitic.

I hope that the next year will be a better year for Dutch Jews than the one before was. But as melancholy as it is, I have a very hard head…

Now Proven: The Left Causes Three Times as Much Anti-Semitism Than the Right

Last Monday a report was published by the European Union Agency for Fundamental Rights which shows that anti-Semitism in Europe has increased enormously, and that Left-wing agitators are the main culprits. That is why 38% of European Jews are already considering emigration.

Around 38% of all Jews in Europe are considering emigrating. In a response on Twitter, Jan Tervoort, working as a guide in Amsterdam, stated that Likud is heavily responsible for this. He wrote: “Anti-Semitism is indeed increasing, unfortunately, not least on the new right wing that Paternotte [from ThePostOnline] and Likud cultivate.”

This claim, in which he tries to blame the Right for the current anti-Semitism, is rubbish. On the contrary, this study shows that 35% of the anti-Semitic incidents in the Netherlands come from Muslims (most of them ignored by the Left) and 18% from the Left. Much less comes from the Right, 6%, and 5% from the Christian side (for the rest, it is not clear from which conviction it comes).

The Left tries to blame the Right as the cause of anti-Semitism, but the facts show that the Left itself is guilty three times as often. Muslims even six times as much. But that is something you won’t hear from the politically correct media.

However, that is not the only bad thing about his tweet. We have repeatedly pointed out to Mr. Tervoort with tweets that it is anti-Semitic to accuse Jews of being the cause of anti-Semitism: after all, it is Jew haters who are guilty of anti-Semitism, not the Jews themselves. The opposite claim — ‘blaming the victim’ — has a long history with Jew-haters, for example with the Nazis.

Nevertheless, he maintained his claim for a day. Then he suddenly changed. Probably he realized that he had indeed made an anti-Semitic claim, or someone had made him aware. That he cannot afford (see below). He apologized for his statement, because he wouldn’t have known that Likud is made up of Jews! That is pretty commonly known, you would say, certainly of Likud Israel. From the Dutch representation, that is, therefore, to be expected. Naturally, that is also clearly stated on the Likud Netherlands website.

When we asked how it could be that he did not know this, he wrote “that he has no time for marginal clubs”. So one day in his eyes we were an important factor in the increase in anti-Semitism; a day and a half later we were suddenly marginal.

But it can get even crazier: Jan Tervoort is also the author of an article that “demonstrates” that according to the international definition of anti-Semitism, Israel’s prime minister, Netanyahu, would be a Holocaust-trivializing anti-Semite. Now you will probably think: Okay, this man is totally unbelievable, but how fascinating is that?

That seems interesting. You probably didn’t know Jan Verkoort yet, but you know Dries van Agt. That is the man whose mouth is full over alleged Israeli “violations of human rights”, but who, as a minister, worked hard to release Nazi war criminals. According to various statements, he also gave a personal order as justice minister to kill Moluccan train hijackers who had already been disarmed.

Van Agt, therefore, based on his obsessive negative fixation on Israel, has established a lobby (organization) The Rights Forum, and what is the case? Jan Tervoort is its most important writer. Of the last six opinion articles on their homepage, no fewer than four are from his hand, including his article about ‘the anti-Semite Netanyahu’. Jan Tervoort is Van Agt’s expert in the field of anti-Semitism! It indicates that the disinformation of The Rights Forum is only suitable for the recycling bin.

And the real facts? See the table of the European Agency for Fundamental Rights above. With that, everything is said.