Our expatriate English correspondent Peter has published a memoir entitled In Two Countries Where They Turn Back Time. Below is the author’s summary of the book.

In Two Countries Where They Turn Back Time 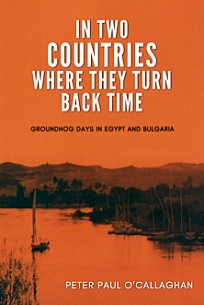 Sometime at the end of the 1980s, I decided to give up work and go travelling. There was a whole world out there and I had seen very little of it. Unfortunately, the offer of voluntary early retirement did not come until 1994, and when it did, I grabbed it with both hands. Up until then I had not gone further from home than Eastern Turkey, North Africa, Eastern Europe and the Mediterranean. I had spent my entire working life with my nose firmly pressed to the grindstone, a very unhealthy situation which can cause those who behave in such a manner to end up with no nose.

The narrative of this book covers a period roughly between 1991 and 1994. It includes journeys I made immediately after I retired, but the trips themselves only serve as a backdrop to other, more important, stories that needed to be told. For instance, the section on Hungary is really about labour relations in the UK during the 1960s and 1970s and the failure of the various politicians in office at the time to take control of a deteriorating situation. This opened the way for the hard-line policies of Margaret Thatcher from 1978 onwards. I was an active trade unionist beginning in the mid-1960s, and lived through it while it was happening around me. It was the time of the Cold War, and there was communist-inspired disruption around the world as communists, their sympathisers and fellow travellers created mayhem all over Europe, Asia and the USA. Regular readers of Gates of Vienna and Vlad Tepes will recognise parts of an essay I wrote in 2017 that was based on similar information.

Some far leftists believed that they could take over the UK by systematic strike-mongering. One particular person — a certain Thomas Gerard (Gerry) Healy— was convinced that his Socialist Labour League could achieve this. To make matters worse, there was a provable conspiracy within the British establishment to overthrow Harold Wilson’s Labour Government in the 1960s and replace it with a cross-party coalition with Lord Louis Mountbatten at its head. The enterprise finally collapsed when Lord Louis refused to have anything to do with it.

My first visit to Bulgaria was accidental, but it left a lasting impression. When I read subsequently about the communist takeover of that country after World War II, I realised just how brutal and ruthless communism and those who sought to impose it were. There was a veritable orgy of lies, deceit, purges, plots, conspiracies, show trials and mass murder indulged in by the communists to gain control of the state and only a few brave men attempted to thwart them. One of these was Nicola Petkov, who tried his level best to prevent the takeover but eventually paid for it with his life. However, right from the very beginning those opposing the communists had little chance of success, especially with the Red Army already in occupation.

The communists played a long and cynical game in their disposal of Petkov. They were unable to act until the formal peace treaty had been ratified by the United States, and an allied presence had to be maintained in the country until this had taken place. However, in the first week of June 1947, they were able to make their move. On 4th June, the United States Senate ratified the peace treaty, and the day after Petkov was arrested on a range of trumped-up charges. The main charges were conspiracy to overthrow the government, undermining military morale and discipline, and organising terrorist activity. There were many other charges in the 9,000-word indictment, but none of them had any substance. Petkov was merely an obstacle to communist control of the state, and needed to be removed.

When the “trial” commenced, proceedings were conducted along well-practised Stalinist lines. Petkov was denied access to a defence lawyer, nor was he allowed to give evidence or address the “court” in any way as this was declared to be of “no use or importance.” Prosecution witnesses, on the other hand, had been prompted, coached and thoroughly prepared so that the outcome was a foregone conclusion.

On 16th August, the farcical show trial ground to an end, the inevitable guilty verdict was returned and Petkov was sentenced to death. The peace treaty came into force on 20th September 1947 and Petkov was hanged three days later. Representations made by Britain and the United States against the execution were snubbed as Petkov, a devout Christian, was put to death having been denied the sacrament, the last rites and, subsequently, a Christian burial — a particularly spiteful act, though typical of communism.

In the mid-1960s, I worked with two older colleagues, one of whom served in the Long Range Desert Group during the Second World War, while the other served in the RAF during the 1950-1954 Suez Canal Zone Emergency. Most of what they told me never made it to these pages; indeed the story of the Emergency itself and the young national servicemen who served, has been effectively suppressed by successive, self-serving British Governments, but not completely. Accounts of events that occurred are included in a website called Britain’s Small Wars, along with details of many other global military engagements instigated by our politicians which our armed forces had to clean up. The webmaster was very helpful in fact checking and suggesting improvements to this section.

I must confess: I did not complete this book recently. It has taken a long time to reach this stage, and I started the first draft in October 1998 when I returned to England after spending eighteen months travelling around Asia. So what took me so long? The main reason was a problem every first-time author has, that is, where to place it and who to approach. I gave up at this stage and for a long time took things no further. I was advised to buy the Writers’ and Artists’ Yearbook which, I was told, contained some good advice and an exhaustive list of contacts. If anything, however, I was discouraged by what I read there. For instance, they advised every new writer to get an agent, which appeared to be good advice until they added that no agent would touch a new author unless he/she had first been published— a typical “Catch-22” situation. However, after having had several manuscripts returned, I became disheartened and remained so for some considerable time but my abhorrence of totalitarianism, either political or religious, has driven me to press on with publication, and I have already made a start on Volume 2.

Peter is an English expatriate who now lives in Thailand. For his previous essays, see Peter’s Archives.

Visit Amazon to purchase In Two Countries Where They Turn Back Time, which is available in both print and Kindle versions.