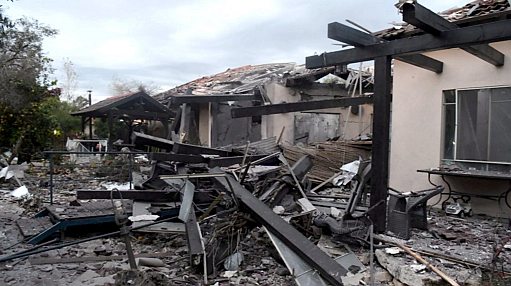 Our Israeli correspondent MC sent us this message from Sderot:

It looks bad here. Reserves are being called up and roads have been closed in the area.

The missile to the Sharon last night was a huge escalation. It was homemade and had a large warhead — with a GRAD type range. It looks as if Hamas has reverse engineered something with a range up to 100km.

Local events are being cancelled, and Hamas is talking up a provocation, but at the same time claiming that the missile was a ‘mistake’. That will be the second of such mistakes in the last few weeks — a missile was intercepted just South of Tel Aviv about a month ago.

There are even claims that the ‘mistake’ was caused by the weather:

Hamas: Rocket Launch May Have Been Caused by ‘Bad Weather’

A Hamas official denied Israel’s accusation that it was behind Monday’s rocket strike on a town in central Israel, north of Tel Aviv, Monday morning which wounded seven Israelis and led Prime Minister Binyamin Netanyahu to vow a strong response.

“No one from the resistance movements, including Hamas, has an interest in firing rockets from the Gaza Strip towards the enemy,” the official told AFP on condition of anonymity, evoking the possibility that it may have been caused by “bad weather”…

The fake ‘mistake’ means that Hamas can claim that Israel is the aggressor and that any response is ‘disproportionate.

My experience with missiles in the Royal Navy tells me that the idea of a ‘mistake’ is just so much codswallop. It takes at least four approvals to ignite a missile. And one never points them at civilian areas, even for ‘fun’.

Corbyn’s ‘friends’ are one nasty piece of work, and birds of a feather…

I will keep you updated on how it feels if and when it escalates. My youngest son is likely to be called up in the next few hours.

A follow-up email from MC came in shortly afterwards:

I just got word that the IDF is going in tonight

The IAF have been hitting targets in Gaza for the last hour or so, but not up at our end so far. Beersheva and Tel Aviv have opened up the air raid shelters. They do not have built-in shelters as we have in Sderot.

Many roads are now closed and the railway is not running past Ashkelon. It is difficult to know how committed the government is. It is election year, and we always have a war in an election year; it appears to be part of the ritual.

The Left always wants to appease, Bibi is in the middle, and the Right wants to remove the threat, so I suspect that if they go in on foot, it will be with limited objectives, as usual.

Of course this is against the background of unrest and terrible conditions in Gaza where fresh water is compromised, as is sewage. They get just a few hours of electricity a day (unless one is a Hamas bigwig), and Hamas have been using live rounds on the rioters.

So it just may be different this time.

8 thoughts on “Hamas Starts Yet Another War With Israel”