The two articles below discuss the anti-Christian and pro-Islamic activities of a Catalonian Marxist youth organization called Arran. The group targets Christian churches with vandalism and graffiti, but objects to those who treat mosques in a similar manner.

Many thanks to Pampasnasturtium for the translations. The first article is recent; the second, from 2017, is added to provide background on Arran’s activities. 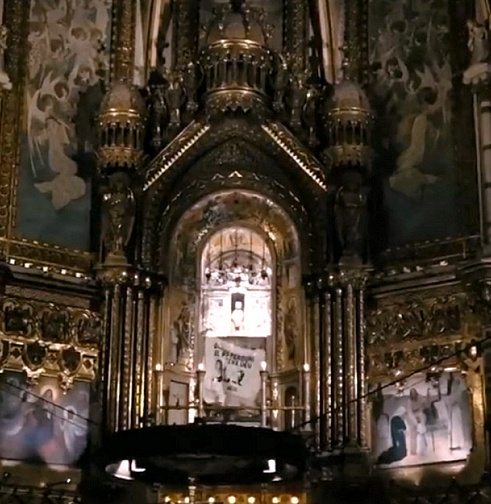 Arran, the youth organization of the Catalan pro-independence Left[1], has hung a banner at the feet of Our Lady of Montserrat[2] to denounce ‘the avalanche of sexual abuse cases within the Catholic Church’.

On the sign can be seen the faces of Montserrat’s abbot, Josep Maria Soler, Girona’s bishop, Francesc Pardo, and Tarragona’s archbishop, Jaume Pujol, and it reads: “May your God forgive you. The Church is abuse, ‘machismo’ (male supremacy) and regime’.[3] 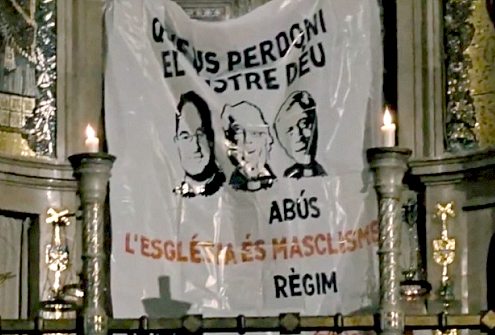 Arran has uploaded a video on social networks where they can be seen hanging the banner on the choir of Montserrat abbey and it’s explained there that this action ‘wants to point the finger at those guilty of sexual abuses in the Church’.

Via a public statement released this Sunday, the youth organization of the pro-independence Left has denounced ‘the sexual abuses and their cover-up afterwards, the role of the Church as a fundamental pillar of the patriarchal system, with misogynistic and male-supremacist discourses, and the Catholic Church as an indispensable piece for the machinery of the “régimen del 78” and the perpetuation of it’.

The second article is from Actuall:

After attacking Catholic and Evangelical churches, the hard Left comes out in support of a mosque

Catalan separatists of the CUP, Candidatura d’Unitat Popular, and one of the groups that form that party, youth organization Arran, have demonstrated their double standards when the time comes to relate to believers.

This Sunday CUP denounced insulting graffiti painted on a mosque in Sant Celoni (Barcelona) with the text ‘f***ing dead Moors’, announcing that in 12 hours the wall would be repainted, and ending with the slogan ‘love against barbarism’. 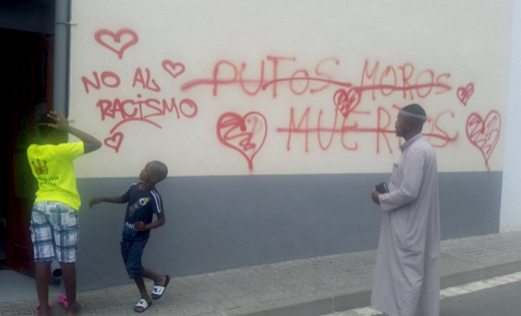 As indicated by Fernando Díaz Villanueva, on Monday CUP was showing two pictures of members of its organization helping paint over the graffiti on the mosque, stating: ‘We condemn any display of fascism’.

[Twitter embed: ‘All together we repainted the mosque’s wall. We condemn any display of fascism. #NoPassaran’]

The attack on the mosque is without doubt immoral, but the CUP’s attitude can only be described as a colossal display of hypocrisy. And that’s because one of the groups that form CUP is Arran, a hard-Left pro-independence youth org that has taken part in violent acts of vandalism in different places.

As a sample of that, in November 2013 Arran attacked Sant Ot’s Catholic church in Barcelona, covering in purple paint its front and leaving a graffiti signed by the group, which even boasted about the attack on its website, displaying a video of the cowardly assault, carried out in the middle of the night. 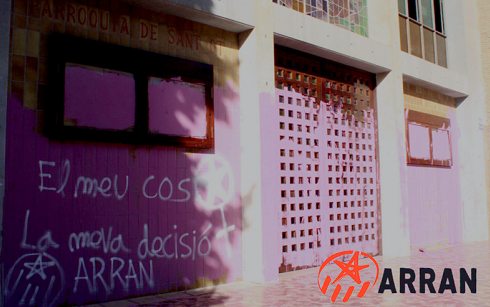 Caption: Photo published by Arran of its attack on Sant Ot’s Catholic church in Barcelona, in November 2013.

A few months later, in March of 2014, Arran attacked an Evangelical church in Torredembarra (Tarragona), throwing purple paint bombs against the first two floors of the front of the building, for the simple reason that Evangelical churches defend the right to life from conception, while Arran argues that killing babies that are still unborn is a ‘right’. Once more, far from hiding, Arran defended the attack on its website. 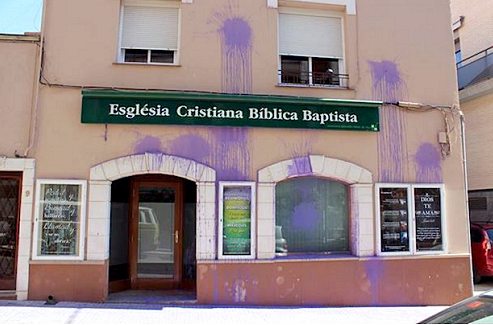 Caption: The Christian Biblical Baptist Church of Torredembarra (Tarragona),after the attack by Arran against this Evangelical temple. (Photo: Protestante Digital)

In November 2015 the far-left organization once again proudly displayed its Christianophobia, painting a graffito signed by Arran in Premiá del Mar (Barcelona) with the text ‘The only church that lights up is the one that burns’, written in Catalan (picture which can be seen at the top of this post). Once more, on its local Facebook page Arran claimed for itself the authorship of the Christianophobic graffiti, and even justified it when faced with the huge amount of criticism it received. 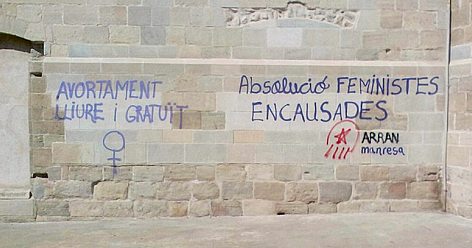 In September 2016 the hard-leftist org tried again, this time attacking the Basilica of Santa María de la Aurora’s College in Manresa (Barcelona) with pro-abortion graffiti, not caring in the least that it’s a Gothic building and declared a historical monument, an artistic treasure that merits special protection.

That these Christianophobes come out now protesting Islamophobia and brag about being defenders of ‘love’ is the last straw. An organization that openly defends criminal attacks as described above against Christians of multiple persuasions and even crimes against public property should be made illegal on the spot.

16 thoughts on “Christianophobia and Islamophilia Among Catalonian Marxists”