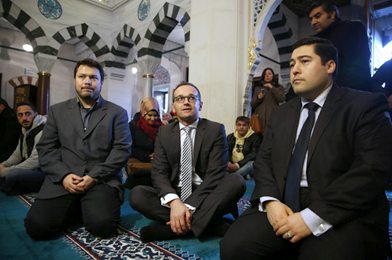 Long-time readers are familiar with Heiko Maas (center in the photo above). Mr. Maas is a Social Democratic politician who has been serving in cabinets under Chancellor Angela Merkel since 2013. He was Justice Minister during the Great Migration Crisis of 2015, and on Groping and Raping night in Cologne on New Year’s Eve of 2015. Now he is Minister of Foreign Affairs.

In the following political commercial for the upcoming European parliamentary elections, Heiko Maas lays out the case against nationalism and in favor of a warm, fuzzy, diverse, and compulsory United Europe.

Many thanks to MissPiggy for the translation, and to Vlad Tepes for the subtitling. If I understand it correctly, the martial music you hear in the soundtrack was not included in the original video:

25 thoughts on “A United Europe… Or Else”