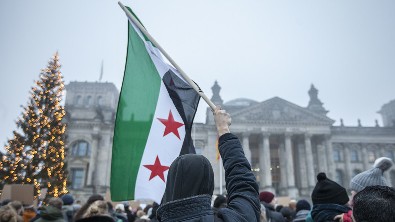 The following open letter to Angela Merkel was written by an actual Syrian refugee — that is, not an economic migrant. Many thanks to Oz-Rita for translating this article piece from RT Deutsch.

Note: Yes, I know that RT is funded and run by the Russian government, and clearly serves the interests of the Russian state. Nevertheless, this letter makes worthwhile reading:

The Syrian dentist Majd Abboud fled to Germany at the end of 2015. In an open letter to the Chancellor, he expressed his thanks for the welcome, but does not see the necessary conditions for integration as being fulfilled. One reason for this is Germany’s policy towards Syria.

Dr. Majd Abboud turned to RT Deutsch with the request to publish an open letter he had written to the Chancellor. Prior to this, the Syrian refugee had already written to numerous other media in this matter, but never received a positive reply — if he got any answer at all.

After the Saarbrücker Zeitung published a guest article by him last year, the 42-year-old was exposed to numerous hostilities and threats — including from compatriots who support the Free Syrian Army (FSA).

Since the end of your term of office is in sight, I would like to take this opportunity to thank you most sincerely for helping me and my fellow countrymen in need and opening your country to people fleeing war and terror. You have saved us a great deal of suffering; we are safe here and have the opportunity to live in peace. In addition, I have always found it a great opportunity for us Syrians to get to know a new culture in Europe, and through contact with Europeans, to open up new perspectives for us and enabling us to broaden our horizons.

Unfortunately, I have learned that the conditions for genuine integration were scarcely in place and still are not today, after three years. Rather, I perceived the so-called integration as a one-way street: Germany was very accommodating to the fugitives, but did not demand any concessions from them in return. The situation was made more difficult by the fact that the German identity is hardly noticeable to immigrants. It seems as if the country is ashamed of it, and therefore has difficulties communicating its values.

In stark contrast to this, it should be noted that many refugees have an exaggerated, often radical sense of belonging to Islam which has often already caused problems for the state and society in Syria. I was full of hope that you, Mrs. Merkel, would succeed in enabling peaceful coexistence between and/or with immigrants, which we have not achieved in Syria because of an increasing radicalisation and Western investment in political Islam.

There has always been much speculation about your motives, and the answer to this question has usually been that you acted out of humanity and Christian charity. But if we are talking about humanity, then you should have ended the sanctions you recently extended against Syria. Because for years millions of people who cannot or do not want to leave their homeland have been and are still suffering from them. After all, these people also deserve charity. In a genuine democracy, for which you always campaign, these people should also be allowed to have their political opinion without being punished.

Sanctions include medicines and medical aids, such as prostheses, which are urgently needed after a war. Nor should the children who starve or die violently every day in Yemen be hidden. And instead of sending them food or medicine, you deliberately and willingly allow the supply of tanks and grenades and even have Saudi soldiers trained by German experts so that they can kill even more people there.

Is this a Christian policy, as it would correspond to your party name?[1] Obviously, the profits of German arms companies are more important to the German government than the Christian values with which one likes to adorn oneself.

At the end of September, I read with great interest that a supporter of the Free Syrian Army (FSA), which the Western media likes to call “moderate”, had been convicted of war crimes in Düsseldorf. He had kidnapped, tortured and murdered people in Aleppo as a member of a militia. I very much welcome the fact that measures are finally being taken to identify the terrorists who fled to this country (Germany). Do you think, Mrs. Merkel, that this was an isolated case?

I have long pointed out that many criminals with radical views are among the refugees, and that Germany should act urgently. It is precisely when we talk about intercultural encounters that radicals and criminals pose a serious threat to integration and to the host country. They damage the reputation of every migrant, promote prejudices and make life more difficult for refugees who are willing to integrate as well as for “those who have been living here for some time”.[2]

The German government has closed its eyes to this for far too long and played down this radical mentality in both Germany and Syria. And [the German Government] thus conveyed the message to the radicals that they can count on Western support, that they can commit any crime in Syria and still always get protection in Germany. As a result, Germany has become an escape destination for criminals. [emphasis added]

Is that what you wanted to “achieve”?[3]

Recently you expressed concern about the situation of the people in Idlib. It has to be said that Idlib is home to the worst jihadists who have not yet been prepared to lay down their weapons. Among them are the FSA, Al-Nusra and IS fighters, but also fighters and jihadists from Afghanistan, Chechnya and about 3,000 Chinese Uighurs. And it was precisely these terrorists who attacked the northwestern districts of Aleppo with chemical weapons on Saturday, 24 November 2018. According to the latest information, at least 107 people were wounded as a result. In September, these groups also attacked the small predominantly Christian town of Mhardeh not far from Idlib, killing twelve people.

And instead of helping us disarm these groups, you send them €50 million of German taxpayers’ money to help them commit more atrocities.

The fighters of the Syrian Al-Qaeda offshoot have now taken complete control of the province of Idlib.

Presumably, the federal government has had no previous news either of these “rebels” destroying and desecrating Christian churches in Aleppo and Homs, attacking and conquering minority villages in the province of Latakia and the workers’ town of Adra in 2013, beheading men and enslaving women. Back in 2013, two priests from Aleppo were also kidnapped by the “rebels”, and to this day nothing is known about their whereabouts.

It has become more than clear that the German government is on the side of the Islamist “rebels” in Syria. This can be seen, for example, in the media coverage. From Ramstein, too, weapons were delivered to the “rebels”. These so-called rebels are not fighters for freedom or democracy, but Islamists who propagate the Sharia and who do not tolerate a dissenting opinion or way of life, but punish it severely. They are perpetrators who present themselves as victims and are also portrayed as such by the Western side.

Support for these “rebel groups” is often justified by alleged or threatened attacks on the civilian population. Video recordings and photographs are used as evidence. However, many cases in the past, as well as the incidents in Chemnitz, have shown that such material must be examined and questioned very carefully. In Syria the source is almost always the same, namely the Syrian Human Rights Observatory (SOHR).

This is one single man, an exiled Syrian who has been living in London since 2010, who sympathises with the Muslim Brotherhood and distributes the images to the media. As a result, Syrian society has been deliberately divided. People were pitted and played off against each other along sectarian lines. Wouldn’t it make sense to take a critical look at this “evidence” before taking a far-reaching decision to form an international coalition and get involved in a war that violates international law?

Even from the alleged weapons of mass destruction in Iraq, which according to Colin Powell and Tony Blair “certainly” existed, one could have learned a lesson from history.

It is time to admit that the federal government has pursued the wrong policy in Syria and been on the wrong side. You see the reason for this, (and this is really sad) in that the federal government is obliged to represent and defend American interests. I call it the “mother of all problems” that only a certain role is envisaged for Germany, that Germany does not have an independent and self-confident foreign policy.

Dear Mrs. Merkel, I know that I am only a Syrian here with an asylum permit. My existence here in Germany is the collateral damage of a senseless war; my voice is all I have now.

And I don’t know if my lines will ever reach you, but if you are really concerned about the welfare of Syrians at home and abroad, please lift the sanctions against Syria.

Set the course for a friendship between the West and the Middle East. End your honeymoon with the radicals, with the terrorists but also with so-called political Islam, both inside and outside Germany. These are the wrong people to talk to, and that is quite obvious. Stop the supply of arms to war zones and send love, education and culture from the heart of Europe to the people of the Middle East and the world, not conflicts and war equipment.

Mrs. Merkel, the world has changed, the power structure has shifted. Please take note of this change and ensure that Germany positions itself correctly for the future.