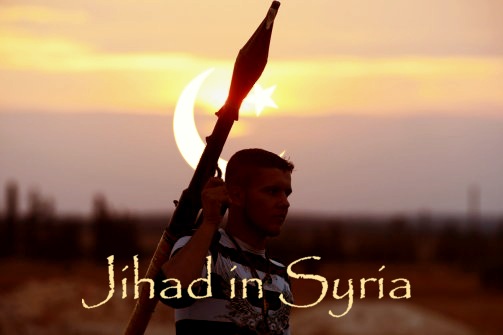 Speaking of returning mujahideen — what about their wives?

A lot of jihad fighters who left Europe for Syria took their molls with them, and the latter were often accompanied by their children. Additional children were sometimes born to those wives while they were in Syria.

The Netherlands is grappling with the issue of jihadis’ wives who are stranded in refugee camps in Syria. Now it looks like the government will arrange the return of six “Dutch” wives and their children — at state expense, of course.

Many thanks to FouseSquawk for translating this article from NRC:

An arrest warrant has been issued against the women. In a letter to the Chamber, Minister Grapperhaus writes that the policy remains unchanged.

Wives and children who fled from the fighting between the Syrian Democratic forces (mostly Kurdish fighters) and the Islamic State, on 31 January

The Netherlands is looking into how, together with the Kurdish authorities, six women who went to Syria, along with their eleven children, can be repatriated. The women are suspected of belonging to a terrorist organization. That is what Minister Ferdinand Grapperhaus (Justice and Security, CDA) said Friday to NOS. An arrest warrant has been issued against the six.

This active repatriation does not apply to other females [who went to Syria] and their children. On Thursday, Minister Grapperhaus informed the Chamber that the policy, with the exception of the six women, has not changed. That was confirmed by a spokesman for the minister this Friday to NRC. The government maintains that the others must make their own way to the consulate in Erbil. This is actually not possible because the women are in Kurdish camps as prisoners.

In a January 8 decision, the court in Rotterdam demanded that the authorities make every effort to get the women out of the Al-Hol camp on the Syrian-Iraqi border. Detailed instructions on this were given. The women and their children should be brought from northeastern Syria to the border with Iraq and from there transferred to the Kurdish Autonomous Region. In Erbil, the capital of the Iraqi-Kurdish region, there is a Dutch consulate. From there, their repatriation should be arranged.

“We have spoken with the organizations that manage the camps. We have established that if they actually transfer them to a safe area, and then to a consulate of the Netherlands, then we can take them. Mothers will then, naturally, be arrested by the Marechaussee [police] and the children can be received by Child Protection.”

On Thursday the World Health Organization reported that 29 children and babies had died from hypothermia in the Al-Hol refugee camp. The population in the camp has tripled in recent weeks. This has led to a shortage of tents, toilets, and medical supplies, and there is no heating. Also, there are dozens of Dutch people.

This week France announced that French jihadis who are stuck in Syria are going to be actively repatriated. This is due to the fact that the US is withdrawing, which makes the situation in the region unstable. Under pressure from judges, Belgium is preparing to bring children of IS-fighters to Belgium. For the time being, Belgium is refusing to repatriate their mothers.

9 thoughts on ““Dutch” Wives Returning From the Jihad in Syria”