I must admit I was disappointed when Dr. Ralph Northam (D) was elected governor of the Commonwealth of Virginia. After he won the election in 2017 I mostly averted my face from the goings-on in Richmond — it just wasn’t interesting enough to watch.

Then last month he voiced his support for a bill that would legalize abortion in Virginia up to and beyond the point of childbirth. Now, that got my attention.

But yesterday he really rose in my approval when it emerged that his yearbook page from med school contained a photo of a man in blackface next to another man in a Klan outfit. And later in the day it was revealed that his nickname as an undergrad was “Coonman” — that’s when my regard for him was heightened even further. I mean, how could you NOT love a guy named Coonman?

Then today my esteem for Dr. Northam reached stratospheric levels. It seems he woke up this morning and said to himself, “I’ll check my memory and I’ll check it quick, yes I will.” His enhanced recollection of the yearbook photo informed him that neither the cove in blackface nor the Klan guy was in fact he. However, in the interest of full disclosure, he allowed as to how that many years ago he had darkened his face to play the part of Michael Jackson in a theatrical production of some sort.

That’s when I decided that I wanted Ralph Northam to remain the governor of our sovereign commonwealth in perpetuity. Virginia needs a man like him at the helm.

In honor of the occasion, I’ve put together this meme pic: 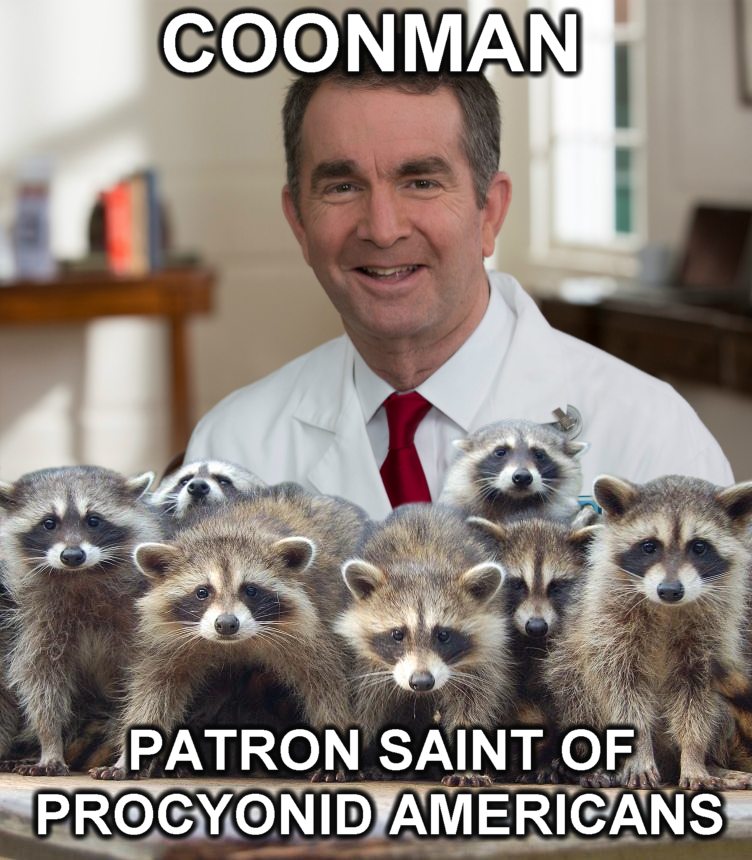 I hope Coonman resists the calls (by both Democrats and Republicans) to resign, and toughs it out for the whole four years. Then after that he can follow the usual career path to the U.S. Senate. And from there, who knows? He could very well be presidential material…

If you want to see the now-famous yearbook photo of Rastus and the Grand Kleagle, visit virtually any MSM site; it’s the hottest story of the day. This CBS article, for example.

22 thoughts on “A New, Improved Minstrel Show in Virginia”