JLH has torqued a well-known poem by Henry Wadsworth Longfellow to produce this synecdoche for current events in the squalid politics of Washington D.C.

Update: JLH’s stanza on typhus has been added. 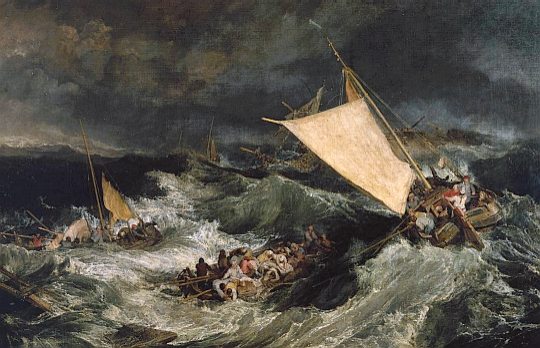 A Greater Wreck Than the Hesperus

by JLH
(with apologies to Henry Wadsworth Longfellow)

It was the Speaker, Nancy,
Who cruised the House’s aisles,
With lies upon her lips,
All covered up with smiles.

Her city awash in culture,
And feces in its streets,
The rich and poor estranged,
And ne’er the twain should meet.

Yet meet they may, and very soon,
In ERs everywhere
For governing rats bring typhus rats,
Just to keep things fair.

The massive camps of homeless
Lined up on heating grates
Were, by themselves, not quite enough
To expand the electorate.

So though she’d already voted yea,
Had had no objection at all,
She prepared now to leave her body behind
To block the hated Wall.

“What’s good for Chuck and Nancy
Is good for the country too.
Forget what you think we told you once;
Just believe what we tell you to.”

Then up spoke an old representative,
With the experience of many years.
The Wall was perhaps not so much to hate
As other things were to fear.

How far to the Left could the Party go?
And would they be left behind?
How should they deal with the up-and-comers
Who had more guts than mind?

Now Nancy had always leaned that way,
Which explained her present rank.
But lately she had the instinct
That she was being outflanked.

And though her heart was correctly placed
And her sympathies were right,
She nonetheless could not deny
That she was both old and white.

Now looking at her colleagues,
Old, new and in-between,
Did less to lift her spirits
Than activate her spleen.

Simple legislators morphed,
In the time it took to blink,
To: candidates, candidates everywhere,
Nor any one could think.

And so she took the podium
With cogent thoughts in mind.
Erect she stood and ready,
Bright-eyed and steely spined.

Both words and sounds came stuttering out,
Her eyelids blinked apace
And all amazed her comrades stared
At her botox-frozen face.

Her nonsense words were given wing
By the fluttering of her hands
But the watchers slowly sifted away
Like an hourglass’s sands.

And still she stands, for all I know,
And vainly stares ahead,
While others of that body
Have long since gone to bed.

9 thoughts on “A Greater Wreck Than the Hesperus”