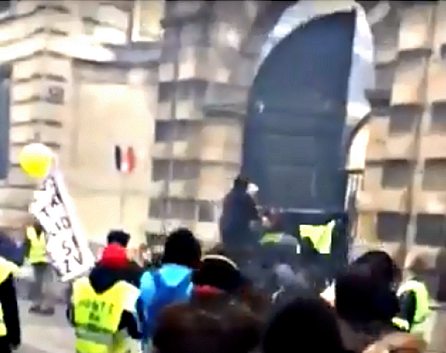 …It’s as kinetic a protest as building barricades in the street and burning cars or dumpsters, but it’s a more focused form of kinesis.

Benjamin Griveaux is the spokesman for President Emmanuel Macron’s “En Marche!” movement, which effectively makes him a spokesman for the French government. At a press conference last week, Mr. Griveaux chided the Yellow Vest movement for mounting what he called an “insurrection” against the French government. The Yellow Vests responded yesterday by hijacking a piece of construction equipment and ramming open the huge doors leading into the courtyard of Mr. Griveaux’s ministry building.

I’ve grown sick of watching all those videos of burning barricades and looting and throwing things at the police. All riots are more or less the same, and quite boring. What happened yesterday, however, was of a different order.

The video of the incident has since gone viral. If I were a major functionary in the French government and had been paying attention to recent events, I’d have a bag packed and ready — as Al Stewart wrote in the song “Running Man”: “the false name inside the passport, the gold bars and the gun” — so as to be able to slip across the border into Switzerland at a moment’s notice. When the situation finally goes sideways, government apparatchiks may not get much in the way of advanced warning.

The video below is a composite of three separate clips. The first shows the press conference in which Benjamin Griveaux admonishes the Yellow Vests, the second shows yesterday’s ramming of the gate at the ministry, and the third has a brief interview with Mr. Griveaux after the storming of his building.

Many thanks to Ava Lon for the translation, and to Vlad Tepes for the editing and subtitling:

Video transcript (in two parts, timed from the original clips):

15 thoughts on “It’s Not Exactly Storming the Bastille, But Still…”