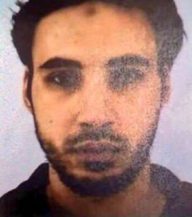 Chérif Chekatt, the alleged killer of three people (or two, or four, depending on which news report you read) in Tuesday’s terrorist attack in Strasbourg, was shot to death this evening during an exchange of gunfire with police in Strasbourg.

Mr. Chekatt’s motive for the attack is still completely and utterly unknown. Authorities admit they are frankly baffled.

OK, so I made that last part up, but still…

Below are excerpts from a Fox News report on the dénouement in Strasbourg:

A wide-scale manhunt for the suspect had been ongoing since the shooting earlier this week. Three people were killed in the attack and several others injured, police said.

The National Police of the North, in a translated tweet, thanked the public for their reports which helped “find the wanted individual.”

It was posted along with an earlier tweet from law enforcement that included a photo of Chekatt.

Before opening fire on the Christmas market in Strasbourg on Tuesday, Chekatt, 29, yelled “Allahu Akbar,” Paris’ public prosecutor said, in the first official statement that pegged the shooting as an Islamic terror attack. Chekatt escaped the scene in a taxi.

Here’s a brief snip from a French news report (can’t remember where I picked it up):

Cherif Chekatt, the presumed perpetrator of Tuesday’s attack at the Christmas market in Strasbourg, was killed by police Thursday evening in the south of the Neudorf district.

The following video (recorded yesterday) shows excerpts from the reaction to the Strasbourg attack by an official spokesman for the French government. Many thanks to Ava Lon for the translation, and to Vlad Tepes for the subtitling:

Below is the response to a colleague in the European Parliament by an Italian MEP for the Lega Nord named Angelo Ciocca. Many thanks to FouseSquawk for the translation, and to Vlad Tepes for the subtitling:

26 thoughts on “The Strasbourg Mujahid Gets His 72 Virgins”