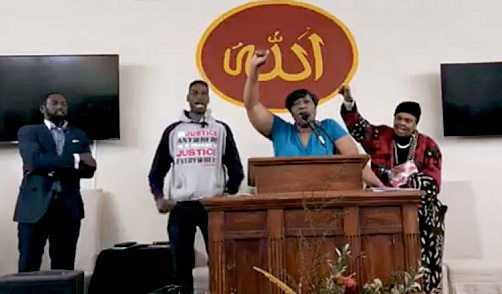 The town of Hoover, Alabama is a relatively new suburb of Birmingham that has grown rapidly since the 1970s. Its population is mostly white, which is probably why it is catching so much flak now in the wake of the mall shooting in which a young black man carrying a gun was shot dead by a white policeman after two other nearby people had been shot by an unknown assailant.

Here’s a news report from November 24, two days after the shooting: Man killed in Alabama mall shooting was ‘likely’ not gunman, police say

“No Justice No Peace” demonstrations started shortly after the death of the young man. The police acknowledged that their officer had shot the wrong person, and referred the incident to a state law enforcement agency for investigation. However, as usually happens in such cases, the demonstrators were not satisfied, and demanded action before the wheels of justice finished turning.

I had heard about the protests, but what I didn’t know until last night was that the demonstrations and boycotts are being organized and coordinated by the Nation of Islam and Black Lives Matter — from a mosque.

A reader in Hoover sent this tip about what’s happening in his town:

There was a mall shooting here in Hoover, Alabama, where an on-scene officer responded to a dispute/shooting, and then allegedly shot an armed black male. Hoover is a city of about 90,000 people, and a local economic engine. This incident made international news, and Jesse Jackson came down for the funeral of the deceased. The state is investigating, and nothing has been concluded yet.

The reason for this message is to get the word out about the behavior of the protesters, who have been disrupting commerce, threatening officers, and getting more and more outrageous in their conduct. They have told media that they will protest at officer’s homes, dox them, and there have been indications of violent intent. Now, however, they have taken it to a new level. They have joined forces with Nation of Islam and other radical groups, promising, FROM A MOSQUE, “war” on the City of Hoover:

Update: More background from our reader in Hoover:

If you’re not familiar with the Hoover area, this is a very nice, upscale, and large mall. Though the mall had nothing to do with the shooting, the protesters want to destroy it. However, they have had little success, as the mall is busy once again.

Below are excerpts from a report from Thursday’s edition of The Hoover Sun:

[Photo caption: Cara McClure, a leader in the protests against the police shooting at the Riverchase Galleria on Thanksgiving night, leads a crowd of about 200 people in a chant at an organizational meeting at the Muhammad Mosque No. 69 in Birmingham, Alabama, on Wednesday, Dec. 5, 2018.]

Several groups have joined forces to bolster the protest over the Hoover police shooting at the Riverchase Galleria on Thanksgiving night and are calling for a “war” against the entire city of Hoover.

On Wednesday night, members of groups such as the Nation of Islam, Black Lives Matter, New Black Panther Party and Jefferson County Millennial Democrats gathered at Muhammad Mosque No. 69 in Birmingham for a “Justice for E.J. Community Forum.” An estimated 200 people were in the standing-room-only organizational meeting.

Speakers said it’s time to rally the troops for a war to get justice for Emantic “E.J.” Bradford Jr., who was shot and killed by a Hoover police officer on Nov. 22 as the officer responded to another shooting in the mall — and the target of that war is the entire city of Hoover.

Hoover police have placed the officer on administrative leave while the Alabama Law Enforcement Agency investigates Bradford’s shooting and the shooting of an 18-year-old Birmingham man and 12-year-old girl.

Threats to Escalate the ‘war’

On Wednesday night, speakers at the mosque made it clear this “war” is about much more than Bradford’s death and is about to escalate.

Carlos Chaverst Jr., one of the protest leaders, said they will continue almost daily protests in Hoover and are preparing for a huge protest next week.

Cara McClure, another leader, said they are bringing in people from out of state this weekend to train people here how to effectively conduct protests.

“It’s time to go to jail. We’re going to do some arrestable actions,” McClure said. “It’s our time to fight. … I’m bringing in folks from all across the country to prepare for battle because we’re going to shut down Hoover.”

Tremon Muhammad, the student minister for Muhammad Mosque No. 69, said this protest is even bigger than Bradford. “E.J.’s life was sacrificed for a bigger cause,” Muhammad said.

“Either black men are some evil, nefarious, thuggist, criminal-minded people, or the criminal justice system is broken,” Crump said. “I refuse to believe that black men are worse than any other men walking the face of the Earth.”

Le’Darius Hilliard, president of the Jefferson County Millennial Democrats, said black men all over the country have been killed for being black, and now it’s happening here in Alabama.

“There’s no way I can sit here and believe that we’re here in Birmingham, Alabama — the heart of the civil rights movement — and we have these fantastic genes that come from power and strength and struggle and pain, that we can’t overcome this situation we’re facing today,” Hilliard said.

Hilliard described himself as being like Martin Luther King Jr. because he believes in nonviolent protesting, and described Chaverst as being like Malcolm X, who challenged his followers to defend themselves against white aggression “by any means necessary.”

Hilliard said the protesters are in a phase now that if authorities don’t know that protesters aren’t playing with them, no change will take place.

“They took their money and their businesses, and they set up a new town — a new city, and they called it Hoover,” Farrakhan said. “They built up shopping malls to attract you from Birmingham, that you will spend your money in Hoover where you don’t live. Hoover’s tax base will be able to expand from your money, that they may give to their citizens.”

Farrakhan encouraged black people to quit spending their money in Hoover and instead take over downtown Birmingham and build it up.

Muhammad, talked about a need to protect the black-owned businesses in Hoover as protesters conduct an economic boycott of the city.

“We’re going to have to put our brainpower together to figure out how to get the least amount of casualties of war,” Muhammad said. “That’s what this is — it’s war.”

EDITOR’S NOTE: On Friday, Carlos Chaverst took issue with the idea that protesters want a physical “war” with the city of Hoover. In the past, he has said the intent of the protests is not to harm anyone physically, but if they are met with force, they will respond and act accordingly.

6 thoughts on “A Jihad for Justice in Alabama”