Ivan Winters lives in a very culturally enriched area of West Yorkshire (formerly the West Riding). For a change of pace, the following report from him has nothing to do with the cultural enrichment of the UK. 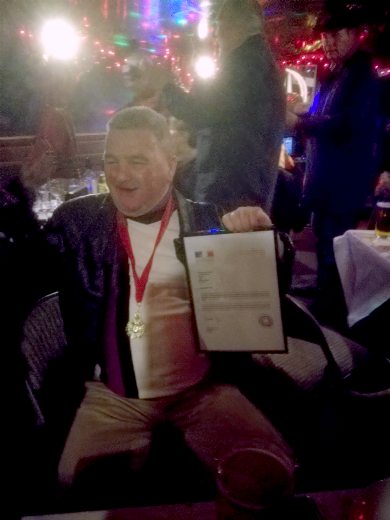 A Gallic Sense of Priorities
by Ivan Winters

I was onboard a ‘Barge Cruise’ on the River Aire in Leeds in early December. The reason for this is that I was invited to attend as a guest by a member of the Leeds Orange Lodge. I have always been a staunch Unionist, but in fact could never legally be a member of an Orange Lodge. I have been asked a couple of times, but Orange Order rules state that a candidate for membership must be a Protestant, and I have had to point out I am in fact a (non-practising) Jew.

In addition to enjoying the (excellent) buffet, the bar and a very friendly DJ playing music suitable for an older person’s tastes, there was also an official event partway through our cruise. This was the ‘official presentation’ of a medal to a lodge member. The medal was the French Légion d’Honneur!

How did this happen?

The member is called ‘John’ and he is a bricklayer by trade. He also teaches bricklaying and a couple of other trades at a local college. John was in Lille in France in November to attend one of the centennial events marking Armistice Day. He was staying at a local Novotel when there was a disturbance in the hotel lobby in the evening. The night porter was trying to eject two Albanian migrants who were making a nuisance of themselves. John went to the night porter’s assistance and helped him eject the migrants. Someone either in the local gendarmerie or the Novotel Hotel management reported John’s assistance up through their chain of command. The result was the issuing of a ‘Légion d’Honneur’ to John complete with a medal and a (bilingual) certificate detailing the circumstances which had caused the issue of France’s highest award for bravery. The certificate was signed by ‘President of the Republic’ Emmanuel Macron!

The official presentation was carried out by the Lodge Secretary and the Deputy Lodge Master. Following the presentation the DJ played The Marseillaise. Everyone on the boat stood for the playing even though many of those present will have been ex-Servicemen, and most British ex-Servicemen have their own robust opinions of French bravery.

This of course led me to think about the French President’s sense of priorities. For the past several weeks the media have covered the strikes/riots against Macron’s rule by the ‘Yellow Vests’. He has gone from being a president who has lectured world leaders, including President Trump, about their policy decisions, to having his policies very publicly rejected by his own electors! In addition to this very public humiliation, massive damage has been done to the French economy. Tourism is a major earner for the French economy but the seasonal tourist trade has been wrecked. In addition to the damage to buildings, vehicles, etc., the retail centres of major cities such as Paris have lost most of their expected Christmas and New Year’s seasonal sales revenue.

The President has been reported to have spent some of the recent weekends in the Elysée Palace, with the building surrounded by hundreds of police officers, armoured cars, etc. Some reports indicate that there has been a helicopter on ‘standby’ to fly him to ‘safety’ (!?). He has refused to meet with the leaders of the protests to discuss the demonstrators’ grievances. But he has found time to issue a medal and a certificate to a brickie from Beeston. A strange sense of priorities! Very Gallic.

15 thoughts on “A Gallic Sense of Priorities”