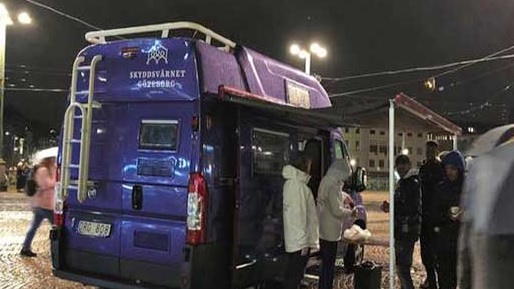 Nobody is loopier than the Swedes, not even Californians. But I shouldn’t badmouth the good ladies of Gothenburg — maybe coffee and sandwiches really will turn these criminal “youths” into law-abiding Swedish citizens.

I’m looking forward to a follow-up report from Gothenburg in four months when the trial period is over.

Many thanks to Tania Groth for translating this article from the Swedish outlet Samhällsnytt:

Criminal gangs in Gothenburg to be stopped with coffee and sandwiches

Nordstan has for a long time been a gathering place for what Göteborgs Posten describes as “people with social problems and youth at risk,” but which residents of the city more legitimately call criminal immigrant gangs. Now, however, they want to put a stop to this. Social and law enforcement agencies and organizations have agreed to buy a coffee bus where anti-social and criminal youth are offered the option of drinking a cup of coffee instead of robbing, stealing and selling narcotics.

The hope now is that the coffee bus, also known as the “Security Bus”, will “contribute to peace outside the shopping center on rough weekend nights.” The bus costs the better part of a million Swedish Crowns (out of a total of five) from the resources of the Social Resource Board that the non-profit organizations Fryshuset and Skyddsvärnet have received to launch a new ventures for “safety-creating activities”.

In addition to serving coffee, the bus will also provide a basis for “building relationships” with the antisocial and criminal immigrant gangs. It is hoped that this relationship-building will pilot young people will towards a more advisory and motivated dialogue.

The intention is that the coffee bus will primarily be in operation in the evenings and nights during weekends, and drive between various “messy places” in Gothenburg. An initial drive was made this past weekend.

Emma Forseth, a business developer at Skyddsvärnet, says that there should also be sandwiches available from the bus. The philosophy behind the initiative is “full people are calmer people.” With a hot cup of coffee and a sandwich in the stomach, it is believed that the inclination to commit crimes should decrease among the individuals within the target group.

Some of the gangs are so-called Moroccan street children who are in the country illegally. After the coffee and sandwich they would then be encouraged to go to a church for the homeless.

For “youth on a slippery slope (towards crime)”, one hopes that a conversation over a cup of coffee will serve as a “disarming beginning” for the criminals to leave crime and start a decent life.

“It may be banal,” said Emma Forseth, assuming that the project may face criticism from those who believe crime should be solved with police, and illegal immigration with deportation.

Emma Forseth defends the initiative with “But sometimes the simple is also effective.”

Lotta Rosander, who is responsible for the coordination of the security work in Nordstan for Social Resource Management, shares Emma Forseth’s confidence. The fact that the “Security Bus” is present also means that there are more (visible) adults in Nordstan, which she believes will lead to a safer environment.

She is at the same time forced to acknowledge that the reason that the area is a bit calmer and more peaceful may be attributed to the fact that the police have made great efforts to clean up, among other places, Brunnsparken. But there is still a lot of crime and drug-dealing going on. Therefore, the coffee bus is needed, says Lotta Rosander.

The trial period will last for four months and then be re-evaluated for a possible extension.