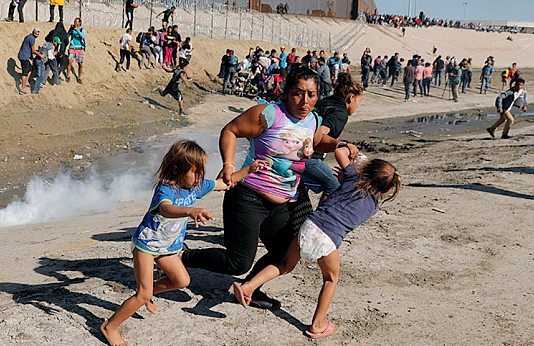 I doubt there’s anyone among our readers who hasn’t seen the photo above. It’s the North American equivalent of the Dead Baby photo from the beach in Anatolia that enabled the Great European Migration Crisis of 2015.

As the migrant “caravan” approached the American border at San Ysidro, an uncountably large number of journalists, especially photographers and videographers, embedded themselves among the “refugees”. This was the moment they had all been waiting for — a chance to document the atrocities of the Norteamericanos against the poor innocent migrants who had walked all the way from Honduras (well, they may have ridden buses a li’l bit, here and there) to get to the land of peace and freedom and welfare handouts.

And then those dastardly fascists fired tear gas at the desperate, innocent migrants! Including the women and children!

The photographers watched those women and children closely, because there were so few of them. 95% or more of the members of the caravan were young men of military age. But there were a few women with kids, and when the opportune moment came along — when the tear gas canisters flew into that dry riverbed — a photographer snapped the photo that went around the world fifty times before the truth could put its pants on.

I hope he drove a hard bargain when he peddled it to the media outlets, because it appeared everywhere. A woman and her kids were tear-gassed! Oh, the humanity! We’ll show that again and again and again!

The woman was eventually tracked down and interviewed, but nobody asked her why she took her little girls into a situation that was known to be dangerous. Unless her IQ was under 70, she knew it was not a good place for children. But she took them anyway.

None of the reporters asked her that, because it doesn’t matter. All that matters is that a woman with her babies was fleeing the tear gas launched by those evil Americans — and the magnificent opportunity offered by the photograph of it.

This is the Dead Baby moment of the Great Mexican Border Crisis of 2018. Except that in this case, the babies didn’t get killed; they didn’t even get hurt. That’s why I’m willing to post the photo of them.

A few weeks ago I wrote a post entitled “Och, the Puir Wee Bairns!” about the systematic use of globalist propaganda exploiting conveniently provided images of children. This photo is the San Ysidro version of the same phenomenon, but this time we have to say, “Ay, las Niñas Pobres!”

I predicted there would be a Dead Baby moment on the Mexican border, but I expected it to happen before the midterm elections. I still haven’t figured out why the caravan’s managers waited until now to pull the trigger.