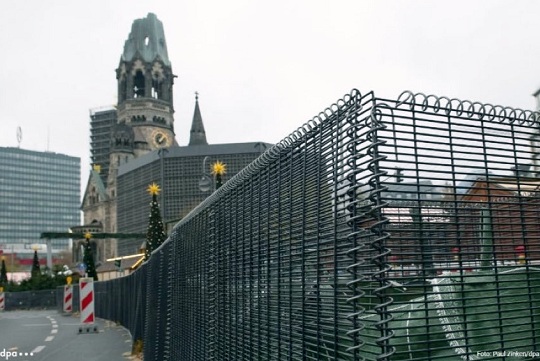 The city of Berlin has come up with a way to prevent Islamic terrorist attacks: Put native Germans in compounds surrounded by barbed wire.

OK, so I’m exaggerating — they don’t really use barbed wire. But still, based on the photo above, it’s pretty darned close to it.

Many thanks to MissPiggy for translating this report from NTV:

Two years after the Islamist terrorist attack that caused twelve deaths, Berlin’s Christmas market at the Gedächtniskirche is reopening with an extensive security perimeter. Since Monday workers have been building more than a hundred square metal baskets along the perimeter the Breitscheidplatz and screwing them into a long row. The baskets come with plastic bags filled with sand. Extra bollards block the length of the perimeter and near pedestrian accesses.

In addition, the Tauentzinstraße in the direction of Charlottenburg and the Budapester Straße direction Schöneberg have been turned into one-way streets. Only buses, bicycles and delivery traffic may use the lane that travels against oncoming traffic.

According to the Senate, this combination of different barriers is supposed to offer a “unique access protection” in Germany to prevent terrorist attacks using trucks weighing up to forty tons.

The Berliner Kurier called it the “Mulled Wine Fortress”. The barrier elements and their construction and dismantling cost the country more than €2.5 million. The metal bollards and concrete bases are to be reused in the future.

The city’s security officers developed new protection concepts specifically for the Breitscheidplatz after the attack. Other Christmas markets in Berlin have to pay for the security of their markets themselves.

On December 19, the second anniversary of the Islamist terrorist attack with a truck on Breitscheidplatz, a memorial service with a wreath-laying ceremony is planned. In addition there will be a minute of silence for the twelve killed and more than 70 victims injured by the terrorist attack.

22 thoughts on “A Modern Multicultural Christmas in Berlin”