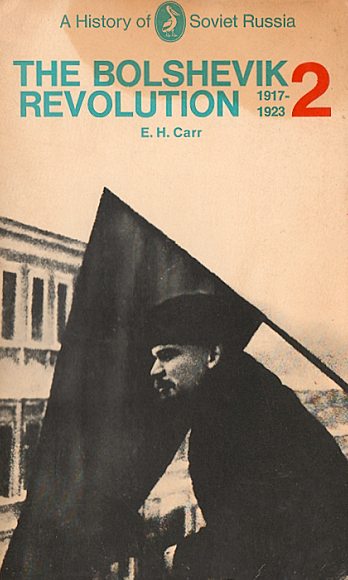 A few days ago I was looking through a box of old papers, vintage ca. 1970, and I found a copy of the 1966 Pelican edition of Volume 2 of The Bolshevik Revolution by E.H. Carr. Since the book hasn’t seen the light of day in forty-odd years, it’s in pretty good shape. I bought it in 1968 — for 9s6d, or about 48p, as a matter of interest — when I was studying for A-levels. My history teacher recommended that anyone who was planning to sit special papers (which I was) should read it in preparation for the exam.

E.H. Carr, if not an outright communist, was definitely a communist sympathizer and an apologist for Stalin. But that doesn’t detract from his work as a historian — like many of the comsymp historians, he was from the old school: researching history meant studying the facts and writing them up, with thorough annotation of sources. A historian might color his narrative with his own opinions, but he didn’t scamp the facts.

The same was true of Isaac Deutscher, an actual communist, whose biography of Stalin was also on my reading list back then. I read those books and others, discounted the bias of the writers, and accumulated a vast store of information about the Bolshevik Revolution and Soviet Russia, some of which is still stuck in my head today. Reading history written by commies never improved my opinion of communism — in fact, some of the ghastly truths about Lenin, Trotsky, and Stalin contained in those books hardened my attitude even further. A few months ago, when I was arguing with Felix Quigley (who was our resident Marxist commenter for a while), he wanted to know where I got my bogus information about Lenin. My source was in fact the book shown above — I couldn’t remember the author’s name at that point, but I told him it was written by a communist or communist sympathizer.

Facts is facts. And they’re in there.

This book was the second of three volumes on the Bolshevik Revolution, which themselves were part of a series on the history of Soviet Russia. The blurb on the Pelican book says there were eight volumes, but I thought there were about fourteen — maybe Carr wrote more of them after 1966.

Anyway… The font size in the book is microscopic, so I know I’ll never read it again. Oh, for the days when I could read those tiny little black letters!

So here’s my proposal: I’ll put this in a book mailer and send it to anyone in the USA who would be interested in reading it. It’s in good condition; the spine is intact. There’s only a bit of yellowing and that coffee stain from 1968 at the top. I’m restricting it to recipients the USA because book rate is cheap, so I won’t mind paying the postage.

If you’d like it, email me with your address at gatesofvienna (at) chromatism (dot) net. A week from today I’ll compile a list of interested parties (if any), have Dymphna choose one of them at random, and mail it off to the lucky winner.

This book is dense with information. I noticed that there’s a big section on the NEP in the second half of it. That’s one of the more interesting developments in the early history of the Soviet Union.

5 thoughts on “You Say You Want a Revolution…”