This long book review, only slightly shortened, is the most recent essay on the Witherspoon Institute’s website.

Pundits will be slicing and dicing the Trump Phenomenon ages hence. In the meantime, the authors of the book in question (and the reviewer, too) have captured well the American zeitgeist.

Sadly, in the almost-two-years since Trump took office, it is still impossible to know whether the wishes of the electorate will be honored by their representatives in Washington D.C.; so far there appear to be few, very few, men of good will there. Or women, either, for that matter. It resembles nothing so much as it does a Fellini film.

The bright spots on the political landscape are the Trump rallies that continue as the hallmark of his direct approach to average American people, people whom American MSM would barricade behind their wall of innuendo and fabrications. Trump’s clever work-around will be taken by future presidents to get past these jornolists. 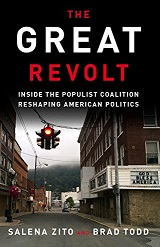 The country’s ruling elites misunderstood or ignored the concerns of a significant segment of the electorate. The Great Revolt suggests that those elites should move beyond lamenting the misfortune (to them) of Trump’s elevation to the presidency and ponder the mistakes on their part that made it possible.

Almost two years after the event, many Americans — even the most sophisticated political observers — are still astonished and perplexed by the results of the 2016 presidential election. “What happened?” many people wonder —including Hillary Clinton herself, who chose those words for the title of her election memoir. How did Donald Trump, the most unlikely presidential candidate in American history, ace Clinton and her party out of the presidency?

Was it a mere fluke? This, of course, is the explanation favored by many Democrats and even some Trump-averse Republicans. Trump, after all, lost the national popular vote, and his electoral triumph depended on eking out narrow popular vote victories in certain key states. No one can dismiss the possibility that, had one or two details played out differently — say, for example, had former FBI Director James Comey remained silent about his brief re-opening of the Clinton e-mail investigation — Clinton would have prevailed.

Or perhaps Trump’s victory was not a fluke, but rather a sign of a significant electoral realignment. This interpretation is favored by Trump’s most ardent supporters, and, no doubt, by the president himself. Trump may have lost the popular vote, but he won the electoral college vote handily — more handily than any Republican since 1988. Moreover, Trump “flipped” a number of states that had been reliably Democratic for decades. While he only won them narrowly, he far outperformed previous GOP nominees in those states.

It is only fair to acknowledge that Hillary Clinton was not alone in having her presidential aspirations thwarted by external factors; Trump faced a national press corps that seemed determined to destroy his candidacy from its inception. One can only wonder how much stronger his campaign might have been had the media chosen to act as a nonpartisan conduit of information instead of as an unpaid arm of the Clinton campaign.

Confronted with these competing plausible interpretations, how are we to understand the significance of the 2016 presidential election? Salena Zito and Brad Todd try to answer this important question in their excellent and fascinating study of Trump voters, The Great Revolt: Inside the Populist Coalition Reshaping American Politics. As the subtitle suggests, the authors are inclined to believe that the 2016 election was no fluke but portends a reconfiguration of the forces that have traditionally shaped American politics. Nevertheless, they are properly cautious about whether Trump’s coalition can be held together and, if so, whether it can remain a governing majority for long.

Who Voted for Trump?

Zito, a journalist, and Todd, a Republican political consultant, make their task more manageable by choosing not to examine Trump supporters nationwide but instead to focus on a relatively narrow subset of them. They surveyed and did extensive interviews with Trump voters from ten counties in five states of America’s Great Lakes region: Pennsylvania, Michigan, Ohio, Wisconsin, and Iowa.

This approach serves the authors well. These states — and these voters — are where the difference was made and where there is something new to be learned. Most of Trump’s voters, after all, are a relatively well-known and well-understood breed: loyal, long-term Republicans in traditionally Republican states. In these Great Lakes states, however, we also find long-time non-voters and even Democrats (including, remarkably, Democratic Party and labor union activists) who were moved by Trump’s populist appeal either to vote for the first time or to walk away from the party around which they had organized their whole political lives.

The Great Revolt identifies and profiles seven kinds of voters essential to Trump’s winning coalition in these decisive states:

The Great Revolt is refreshing and enlightening in part because it is so non-judgmental. The urge to denounce Trump’s voters has already been indulged far beyond the limits of reason, prudence, and justice, and the authors wisely eschew it. Rather, they listen sympathetically to these voters in order to learn about them and their concerns.

Nevertheless, anyone still entertaining such notions can be cured of them by reading The Great Revolt. The voters it depicts are responsible people who have worked their whole adult lives, not only to support themselves but also to support their families. Indeed, the importance and dignity of work is a recurring theme in the book, a common concern of voters across the various groups profiled. Some of these voters moved away from the Democratic Party out of a belief that it no longer supports working people but instead seeks to win votes by promising to give away things for free —an approach that one respondent noted is no way to make good people or a strong country.

The book also sheds interesting light on the much-debated question of identity politics. Trump has been accused of leading a movement of “white nationalism.” The Great Revolt provides no support for this slanderous charge. In exploring the minds of these voters, the question of race almost never arises. There are two notable exceptions. One white woman interviewed had adopted two African American children, both of whom had grown up to be United States Marines. Another expressed her disgust at being accused of racism for supporting Trump after she had twice voted for Barack Obama.

This is not to say, however, that there is no element of identity politics to be found in Trump’s coalition. What one finds, however, is less an identity of race and more an identity of place —a regional or geographic identity that its holders believe has been affronted by the country’s coastal and urban elites. One “Rotary reliable” noted that the work of all Americans contributes to the country, but that if you “live in a small or medium-size town” you “would think that we are dragging the country down. What we do here matters. We aren’t a country just made up of large metropolitan areas.”

The US Supreme Court in the 2016 Election

Perhaps most interesting to the student of law and politics, however, is the role that opinions about the Supreme Court played in the election. The evidence presented in The Great Revolt suggests that Trump was helped considerably by his promise to nominate conservative justices to the Supreme Court, a promise made more convincing by his bold stroke of putting out a list of specific names from which he pledged to draw his nominees. One might think that this plank of Trump’s platform was a necessary concession to locking down the traditionally conservative (Ted Cruz-supporting) voters that Trump needed in order to win both the Republican nomination and the general election. There is no doubt some truth in this view, but it is not the whole truth.

The survey and interviews conducted by Zito and Todd suggest that the Supreme Court was a surprisingly salient issue to voters beyond self-styled constitutional conservatives. Although these Great Lakes region voters ranked Trump’s promise to put conservative justices on the Court as third in importance among his campaign pledges, they tended to regard it as a weighty issue.

Perhaps this should not be surprising. Belief in popular self-government is deeply rooted in the American political psyche. Yet, over the past two or three generations, activist courts — often on the basis of debatable and novel interpretations of the Constitution — have been busily narrowing the bounds within which the American people are permitted to govern their country. We boast of being a democracy, but the people are not allowed to decide the definition of marriage or to prescribe a prayer for the beginning of the public school day. It was to be expected that this would produce a spirited response in a significant number of voters.

In addition, many Americans are conservative not ideologically but by disposition. That is, they are more or less satisfied with and even proud of their country. Such Americans would not welcome the Supreme Court’s increasing efforts to place itself in the vanguard of social progress—or, more accurately, of what liberals think is social progress but what many other Americans regard as [a] subversion of the country’s inherited culture and institutions.

Over the last fifty years, the American left has been willing to use the Supreme Court as the “bulldozer of its social engineering” — to borrow a typically vivid expression of Justice Antonin Scalia’s. Moreover, they seem to have thought that they could do this without risking any significant political backlash. Here they miscalculated. The ironic consequence of their miscalculation is the Trump presidency and a more conservative federal judiciary.

This returns us to the question: was Trump’s victory due to mere chance, or was it a result of deeper changes in the nation’s politics? The most prudent answer — here as in relation to most historical events — is that both answers contain an element of truth. Luck may have helped Trump to win, but he was in a position to win because the country’s ruling elites had misunderstood or ignored the concerns of a significant segment of the electorate. The Great Revolt suggests that those elites should move beyond lamenting the misfortune (to them) of Trump’s elevation to the presidency and ponder the mistakes on their part that made it possible.

The NeverTrumpers and the Anti-Trumpers — whatever their socio-economic stratum — are held fast by a dark ideology. Are they even capable of “moving beyond” their bubble to ponder a wider perspective? So far, it doesn’t seem to be the case. However, here is one review from a leftist who actually bought the book:

As a lifelong progressive liberal, to say I was disappointed in the 2016 election would be a gross understatement. I was also deeply, deeply confused… OK, maybe rattled and depressed are more accurate descriptions. How on earth could such a thing have happened?!

But more than a progressive, I am an American, and I care deeply, as we all do, about the future of our country. That’s why this book is so essential. I believe it is vital that we seek to understand and not alienate one another. Zito and Todd [the authors] are proxies for the conversations I’d love to have with people whose life experiences are very different from my own. Were the sentiments sometimes hard to hear, much less empathize with? Of course. But, they, too, are Americans who care about our future, and I’m better for hearing their reasoning for why they voted as they did. Other reviewers have said that this is a great political book, and it is, but it resonated with me the way my favorite sociology classes did: providing true insight into sometimes overlooked parts of our society.

The people who “overlook parts of our society” can mostly be found in front of the cameras and microphones. That’s why this book is important: it’s a remedy for the silence of the coastal elites.

Here’s the book on Amazon.