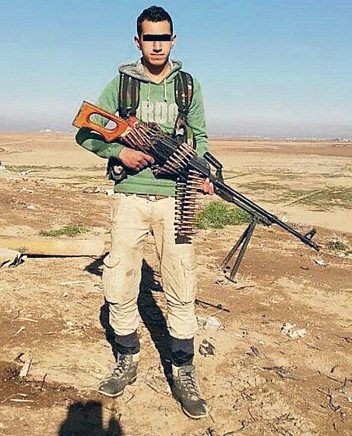 This photo, which shows Majd H. with a machine gun, was published two years ago by him on Facebook, where he wrote: “I am a Kurd and my heart is iron. I am from the city of Qamishli.”

Another day, another round of culture-enriching horror from Germany.

Actually, this incident occurred several weeks ago, but the report only made it out of the police files and into the media within the past couple of days. I assume there has been a concerted attempt by the authorities to keep this sort of thing out of the press for as long as possible.

The accompanying article from Bild, also translated by MissPiggy:

Freiburg — Two weeks ago the evening started with a techno party in a Freiburg disco. For a girl (18) the night ended in a nightmare: the Syrian Majd H. (21) raped her in front of the club in the bushes. After the deed, the refugee brought his friends, and at least seven other men (19-30 years) raped the defenceless woman (she was drugged) for over four hours. The seven perpetrators are Syrians; another suspect (25) has a German passport. Everyone is now in custody!

Unbelievable: According to BILD’s information, the main culprit, Majd H., was already being sought for another arrest warrant by the police before the gang rape. He should have been in custody at the time of the crime!

The unbelievable act: On the night of October 14, the victim went to the disco with a friend. The girls met Majd H. and one of his friends there.

Majd H. is said to have sold an ecstasy tablet to the 18-year-old. After taking the pill, Majd H. gave her a drink. Whether there were knockout drops in it will be clarified through the police investigation.

According to the latest findings, Majd H. led the girl out around midnight. What happened next the police described on Friday as follows: “In nearby shrubbery it came to a sexual assault, according to the victim. After this, more perpetrators are said to have raped the incapacitated girl.”

The girl told the police that she was unable to move or call for help in the bushes. BILD learned: Investigators believe that up to 15 perpetrators raped the 18-year-old! It was not until four o’clock in the morning that the tormentors left her.

She filed a complaint on the same day. The police were able to secure the DNA. Five days later, the DNA database of the Federal Criminal Police Office reported a match: On October 20, the police arrested the friend (19) of the chief perpetrator in an asylum center.

The police continued: “Further investigations, interrogations, forensic investigations as well as covert measures have led to the gradual arrest of further suspects last week. On October 25, we were able to arrest the last one.”

Who are the rapists?

ALL ARE KNOWN to the police; the Syrians lived in refugee homes. According to BILD’s information, Majd H. came to Germany in 2014. He is a Syrian Kurd; his family (parents, brother, uncle) also live in Freiburg.

Baden-Wuerttemberg Interior Minister Thomas Strobl (58, CDU): “If the allegations even begin to be confirmed, we are dealing with a vile act. My sympathy goes out to the woman.”