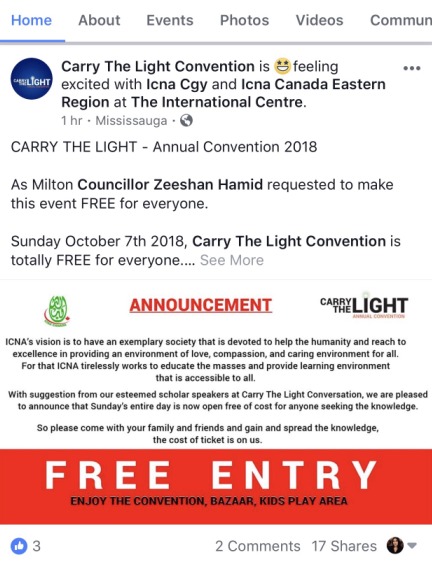 Laura Loomer is an investigative reporter, and Faith Goldy is a former reporter for Rebel Media who is now running for mayor of Toronto.

In the following video (which was recorded yesterday) we see Ms. Loomer and Ms. Goldy having a close encounter with the luminaries of ICNA, the Islamic Circle of North America. ICNA had announced an event for October 7 called the “Carry the Light Convention” featuring Linda Sarsour. The event was billed as free and open to the public — specifically to “anyone seeking the knowledge”.

It turns out that “the public” in this particular case meant “the Muslim public” — i.e. it was using sharia terminology.

Here’s what happened when the two infidel ladies tried to get in:

As it happens, ICNA is included in the Muslim Brotherhood’s 1991 Explanatory Memorandum [pdf] as one of the groups in the “list of our organizations and the organizations of our friends”. In other words, ICNA was an unindicted co-conspirator in the Holy Land Foundation Trial in 2008.

These are the beloved friends of Prime Minister Justin “Baby Doc” Trudeau. Since all of this is happening in Canada, I presume these earnest folks receive funding from the federal government.

12 thoughts on “Faith Goldy and Laura Loomer vs. ICNA and Sharia in Toronto”