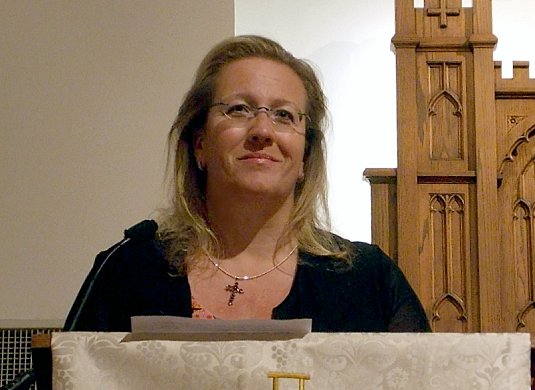 We reported on Friday that the European Court of Human Rights (ECHR) had finally handed down its decision on the appeal by Elisabeth Sabaditsch-Wolff against her conviction in Austria for “hate speech”. The court ruled against her, saying that the Austrian law under which she was tried was within acceptable limits, and did not violate her human rights, because it served the higher good of protecting religious feelings and keeping the religious peace.

The ECHR’s decision has given far more prominence to Elisabeth’s case than it has ever had before. At the bottom of this post is a list of 68 English-language media reports on the decision. The outlets include The Washington Post, The Wall Street Journal, Al Arabiya, The Atlantic, Fox News, National Review, Newsweek, The Telegraph, and numerous others.

I recommend that Elisabeth’s supporters augment this wave of publicity in any way they can. If you keep a blog, you could feature her case and the court’s decision. If you comment on news sites or post on forums, you can inject the topic into the conversation.

Ultimately, this case is not just about Elisabeth Sabaditsch-Wolff. Everyone who falls under the jurisdiction of the European Court of Human Rights — which means not only those in Western Europe, but Hungary, Poland, Czechia, Slovakia, the Baltics, Romania, Bulgaria, and even Russia — has been put on notice: If you say anything that “disturbs the religious peace” — i.e., offends Muslims — your speech is no longer protected by human rights laws.

I can guarantee you that the Muslim world has taken note of the ECHR’s decision. Al Arabiya is not the only Islamic outlet that reported on the decision — check the list for other news sites in the Middle East and South Asia, especially Pakistan.

Once again, I must emphasize the exact words spoken by Elisabeth concerning Mohammed’s marriage to Aisha, for which she was prosecuted and convicted. They were: “What do you call it if not ‘pedophilia’?”

It was a question she raised in a private conversation, and then recounted during her seminar. That was what the entire case against her was built on.

She also remarked that the prophet of Islam “had a thing for little girls.” It’s no longer legal to say those things (and variants on them) in Austria, as confirmed by the ECHR. However, it IS legal to say this:

“Muhammad’s wife Aisha entered the marriage at age 6, which was consummated at the age of 9.”— Higher Court of Vienna, decision Dec 20, 2011

The ECHR decision does NOT impact on any Austrian’s right to say those things, because they were stated in the public record by the highest court in Vienna.

As I remarked back in December 2011, on the day of the higher court’s decision:

As reported in the live-blog earlier today, the high-court judge in Vienna actually allowed the quoting of an authoritative hadith in the courtroom: “Muhammad’s wife Aisha entered the marriage at age 6, which was consummated at the age of 9.” He then acknowledged that the passage was already public knowledge, and thus repeating it could not be punishable under the law.

He upheld Elisabeth’s conviction, however, based on a somewhat peculiar interpretation of Austrian law: to say “Mohammed had a thing for little girls” is an “excess of opinion” that cannot be tolerated. It constitutes ridicule, and is not justifiable.

An interesting and useful corollary can be derived from today’s ruling: it is now completely legal to quote in public the authoritative hadith about Mohammed’s sex acts with a nine-year-old girl. A precedent was established today — at least in Austria.

To that end, one of our Austrian contacts conceived the idea for the Aisha Billboard Project, which would go on prominent display somewhere in Vienna. The digitally-created billboard below shows the German-language version: 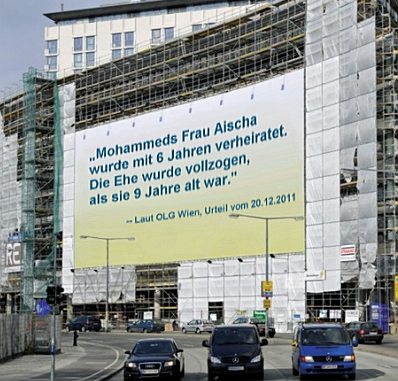 And the English translation: 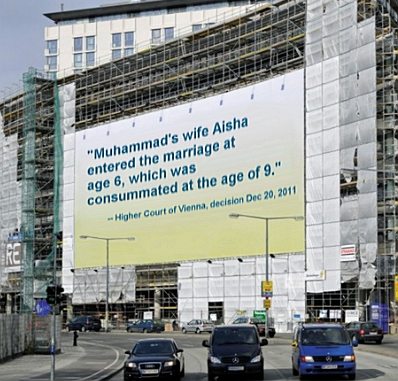 However, a financial backer for the project could never be found. Which is understandable — People in Europe are really scared to stick their necks out, and with good reason. It may be officially legal to say what’s on that billboard, but that doesn’t mean it’s prudent. One’s life may be so easily ruined by the government, or the private sector, or by both working in tandem.

Below the jump is the list of news reports in English about the ECHR’s decision, kindly compiled by Henrik Clausen. There have also been a number of op-eds about the case (including one by Douglas Murray).

27 thoughts on “Elisabeth’s Voice — Now More Than Ever”