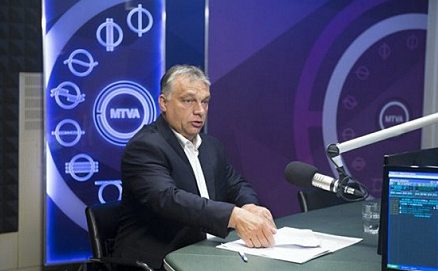 After Hungarian Prime Minister Viktor Orbán returned from being reprimanded and sanctioned in the European Parliament, he went on the radio in Hungary to discuss Brussels’ future plans concerning immigration and the deconstruction of European nation-states.

Many thanks to CrossWare for translating relevant excerpts from the Hungarian daily Magyar Idők:

Viktor Orbán: The Next Battle is About Who Will Protect the Borders of Hungary

The prime minister spoke on Kossuth Radio: the new Brussels plan is that if we can not get Hungary to allow in migrants, then we have to get the right to border protection. “They want to take away the gate keys from us,” he said.

They Would Take Away the Border Control From Us!

He also talked about the fact that the next battle is about who defends the boundaries of Hungary, who decides who enters the country.

“Now we’re looking at the cat that has to come out of the bag,” and the “cat” is that Angela Merkel has sent an ultimatum to Europe via French President Macron. The Chancellor said that the European peripheries outside the Schengen area should reassign part of their border protection to Brussels, he recalled.

“The plan is this: if Hungary cannot be tempted to allow in migrants, then it must have its right of border protection take away. They do not want anything less than to send mercenaries here from Brussels, to replace our Hungarian sons: police and soldiers, who are defending the border, and for whom their home country is important. And we should not have illusions: they [the Brussels mercenaries] will let the migrants!” he said, adding that they want to stamp out Hungary, want to weaken Hungarian resistance.

“They simply want to take away our keys to the gates,” the head of government said. The Sargentini Report [pdf], however, is now being removed from the agenda or its priority scaled back, and the significance of the matter will decrease from day to day, he predicted.

Hundreds of Millions to Fake Civilians

He pointed out that, in addition to immigration, there is another serious stake in the next European Union election. It is clear from the EU budget statistics that the EU supports the Soros NGOs with hundreds of millions of euros.

If the next European Parliament and the European Commission have a different composition, these hundreds of millions will not be given to them.

He added that the European Commission gives money to organizations that operate anti-Semitic campaigns in Israel against Israel.

“The fact is that today’s center of modern anti-Semitism, funded by the anti-Israeli counterpart against Prime Minister Netanyahu, is in Brussels,” he stated.

He believed that this could not continue, and if it is up to Hungary, they will change this situation in May. He stressed that Hungary’s action against anti-Semitism is a matter of humanity and honor.

13 thoughts on “Viktor Orbán on Brussels and Borders”