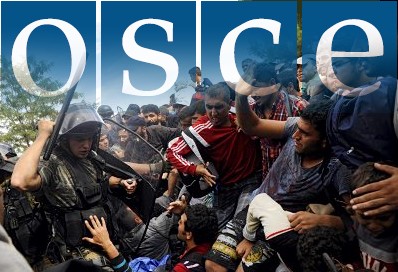 For the past nine years the Counterjihad Collective has been participating in and reporting on the gradual Islamization of the Organization for Security and Cooperation in Europe (OSCE). It’s been a long, tedious, and exhausting process, but now the subversion of the OSCE is all but complete. For readers who are interested in the details, see the OSCE Archives.

As with other trans-national institutions, the Islamization of the OSCE was accomplished via an alliance between Muslims (in this case, primarily Turkey) and the progressive Left. This year, for the first time, the OSCE has officially established a framework to silence critics of Islam and sharia. For an organization that was founded to promote free speech, that’s quite an accomplishment.

I’ve already posted material from the 2018 ODIHR (Office for Democratic Institutions and Human Rights) meeting of the OSCE in Warsaw, and will be posting more. For future reference, rather than repeatedly quoting it, here is the directive from OSCE headquarters mandating tolerance, inclusion, non-discrimination, etc blah yak. The relevant section is excerpted below, but the entire document may be downloaded (Word format) from the official OSCE website.

Under “§ 3. Other provisions”, the OSCE Code of Conduct states:

See also the op-ed about the OSCE by Chris Hull of the Center for Security Policy.

5 thoughts on “The Successful Subversion of the OSCE”