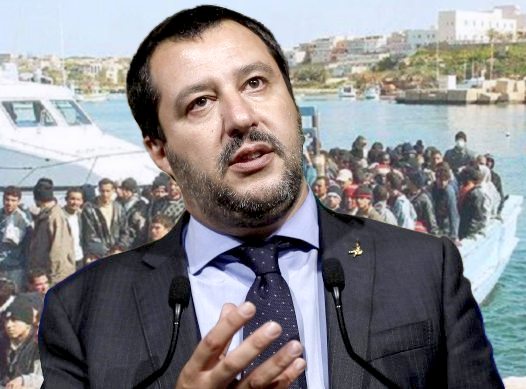 Italian Interior Minister Matteo Salvini is making good on his campaign promises. His latest decree has made real changes to the way Italy handles immigration and deals with security.

Even before the new decree, Mr. Salvini’s policies were already having an effect. As reported in last night’s news feed, there were 20,500 fewer asylum requests in the second quarter of 2018.

Many thanks to FouseSquawk for translating this article from La Repubblica:

Salvini Decree, the points on immigration and security

Restrictive measures on reception. Close to the anti-terrorism legislation, more powers to the municipalities

ROME — The two original decrees (security and immigration) wanted by the Minister of the Interior Matteo Salvini have merged into a single decree that provides for a tightening on the immigration front and on the security front. According to the officials of the Viminale, the text “is not armoured”. From the abrogation of the residence permit for humanitarian reasons to the “crackdown” on the rental of vans, there are many innovations contained in the Salvini decree.

Immigration. On the immigration front, the decree provides for the doubling of retention times in the centers of detention for repatriation: from 90 to 180 days; the repeal of residence permits for humanitarian reasons, replaced with permits for civil merit or for medical treatment or if the country of origin is experiencing a natural disaster. “Humanitarian protection is regulated by six specific cases; there will no longer be the free interpretation of the single,” explained Salvini. “For asylum seekers, the suspension of the asylum application is foreseen in case of social danger or in the event of a conviction in the first degree,” Salvini explained. As for the Sprar (Protection System for Asylum Seekers and Refugees), it will continue to exist but “limited to applicants for humanitarian protection and unaccompanied minors.”

The Salvini Decree also provides for the extension of the offenses that cause the revocation of the refugee’s permission (sexual violence, drug dealing, violence to a public official); the revocation of humanitarian protection to so-called “vacation refugees”; the exclusion of legal aid in cases where the appeal is declared impractical or inadmissible: the court costs will no longer be borne by the State.

Safety. Regarding the provisions on public security, prevention and combating of terrorism and mafia crime, the decree provides for a tightening on the rental of vans that could be used for terrorist attacks; the extension of the ‘daspo’ ( Ban on Access to Sporting Events) for those suspected of involvement with international terrorism; while for foreigners considered a threat to national security the withdrawal of citizenship will start.

Furthermore, the decree contemplates the upgrading of the National Agency for assets seized and confiscated from the mafia; the possibility for local police personnel to access the police force inter-force database; the extension of the urban daspo to additional areas such as markets and fairs.

Moreover, the experimentation with electric impulse weapons (taser) by operators of the municipal police of municipalities with more than 100,000 inhabitants; the exacerbation of sanctions against those who promote or organize the invasion of land or buildings and the expansion of the possibility of using the investigative instrument of wiretaps for those who commit this type of crime.

8 thoughts on “The Salvini Decree: Crackdown on Illegal Immigration”