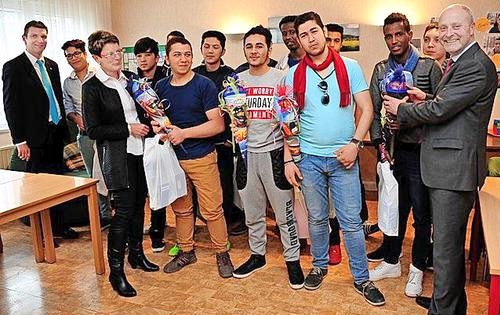 This is one of those stories that could only come out of the Fellini-like nightmare that is Modern Multicultural Germany: a ten-year-old boy was raped by his classmates after a school outing to Kröchlendorff Castle. The alleged rapist was reportedly also ten years old, while the boys who held the victim down were allegedly eleven.

As far as I can tell from reading various alternative media reports and talking to Germans, no one believes that the migrants who attacked the victim are really ten and eleven years old. Like most of the other “children” who have migrated to Germany over the past few years, they are undoubtedly substantially older than they claim to be. Remember the murderer of Maria L., who remained 17 years old for at least five years? Or the other murderous fellow (I forget his name), who claimed to be 15, but must have been at least 25 years old, based on various physical characteristics. Claiming minor status is a strategic move on the part of the migrants — they know they’ll get more lavish benefits, plus the punishments for juvenile crimes are absurdly light. As for the ten-year-old rapist — except for being suspended from school and forced to attend counseling sessions, I doubt he’ll be punished at all.

The “boys” responsible for the rape of their classmate were probably not quite as old as the “child” refugees shown in the photo at the top of this post. But, still — I’ll bet those wee urchins were showing quite a bit of five-o’clock shadow by the time they returned to Berlin after their day trip to the Schloss.

Many thanks to MissPiggy for translating this article from the Austrian daily Österreich:

Before the summer holidays started, a class from a Berlin elementary school made a trip to Kröchlendorff Castle with 38 children. The goal was to learn team spirit, but it all turned out very differently.

During their journey to the castle, the ten-year-old victim was threatened by his classmates, who allegedly said “We f*** you today” to him repeatedly. Out of fear the victim remained silent and did not confide his situation to his teachers. On the evening of the same day, his classmates finally turned their brutal threat into a reality.

Two eleven-year-olds held the boy down as another ten-year-old classmate raped him. Two other students watched the abuse, but did not intervene, reports Bild Online.

Three teachers and one assistant were unaware of what had happened. A week and a half later it was revealed by a friend of the victim, who told a social worker at the school about the terrible events. After the incident became known, parents and police were immediately notified. The offenders were then suspended from school.

School suspension for the perpetrators

The main perpetrator, a delinquent aged ten, was already know for his propensity for violence. He is an Afghan, who is said to have lived in Iran, and repeatedly hit his classmates. Following psychological assessment, the chances are slim that the perpetrator will be able return to a normal school setting in the future.

The two eleven-year-old accomplices were also suspended from school. Both of them, an Afghan and a Iraqi, have been transferred to another school. “I am appalled by this shocking incident. Everything must be done to support the injured child and his family,” said Education Senator Sandra Scheeres in Bild. The young victim will also attend another school, because he does not want to return to his previous class.