Seneca III sends his take on the Brett Kavanaugh hearings, as seen from an British point of view. 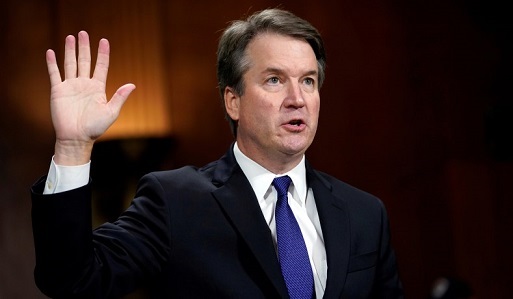 I’ve been watching the Brett Kavanaugh debacle very closely from this side of the pond, because in a general sense we are so afflicted as well. Reading reports, opinions and comments far and wide I’ve concluded that it is a symptom of an apolitical schism opening up, a schism that is nothing to do with Kavanaugh and is not specifically reported as such anywhere, only obliquely alluded to without any in-depth comprehension.

Now that schism has become a chasm that is rapidly widening, and that chasm is the accelerating destruction of the essential, mutually beneficial relationship between heterosexual men and women. It is fast developing on a far larger scale than I have ever seen in my lifetime or in recent history. And there are more contributing factors than just the mindless twitterings coming from the political bearpit; beyond there it is being promoted by malignant academics of both sexes, by the demented hordes of the alphabet soup brigade and by the globalist underground and their hostage media — a confluence of the morally and intellectually regressed.

When it comes to all these ‘toxic masculinity’-peddling, pussy hat- and giant vagina-parading feminazis and the ‘@MeToo’ brigade (even when the latter do have a valid point), the one thing that appears to escape them is that the hard-won privileges and freedoms they have been given through the determined efforts of their gender ancestors will inevitably be lost, because the current crop are incapable of comprehending how such achievements can and should be deployed for the benefit of the whole of our culture not just for themselves and the cisgendered beta males and opportunistic political classes trailing along in their wake.

Essentially it means that if the foundations of the heterosexual family structure are undermined and destroyed then the culture that is built upon those foundations will collapse along with it, having been destroyed from within. The stink of the rot and corruption falling from the mouths of the wormtongues who are trying to destroy America are a symptom not a cause.

Search as I might, I find it impossible to determine how deep and far this rot has spread because the hysterical cacophony of those promoting it drowns out any rational discourse that may be taking place around it. Or it may be that those who enjoy and cherish such long-established relationship norms find it impossible to conceive that such a thing could be happening.

This in part could be resultant from the fact that the collective IQ, at least of the UK and Europe (I don’t have a good grip on what’s happening in the USA but there are signs), is dropping rapidly… as the Globalists intended. Mongrelisation does not always bring hybrid vigour, and when 14 centuries of Muslim inbreeding is also a contributing factor, the slippery slope into an intellectual and cultural black hole becomes even steeper.

A few years ago Matt Bracken wrote a short book entitled Enemies Foreign and Domestic . That was about America, of course, but I’ve long been of a mind that the same applies over here in the UK and Europe, and that the second and fourth words of the title should have been reversed. There can be little doubt left that those who currently have a death grip on the levers of power know what will happen to them when enough people wake up, because they are the ones who have created this situation and have done so to ensure their place at the high table of a future Globalist Dictatoriat. It has not come about because they want to serve our interests, only theirs.

Thus, In the final analysis and with every day that passes, I become increasingly convinced that the fight we face is not about rebuilding the past, nor about romanticizing or denigrating it. The fight is about who will build the future after the present epoch has inevitably and irrevocably collapsed into the dust of socio-political entropy brought about through a confluence of deviant intentions and perverted aspirations. That time is very close.

— Seneca III, in the rising dust of Middle England this 28th day of September 2018.

42 thoughts on “Kavanaugh and Confluence”