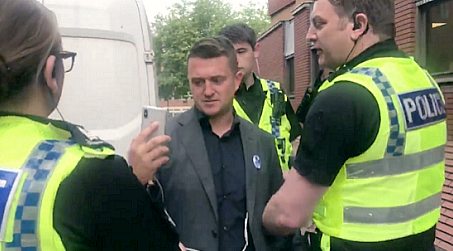 Many thanks to Henrik Clausen for translating this op-ed from the Danish daily Jyllands-Posten:

Jailing Tommy Robinson is a Direct Assault on Freedom of Expression

Many aspects of the Tommy Robinson case should cause all kinds of alarm bells to go off. There is every good reason to take interest in this case, for this can turn out to be the canary in the coal mine.

[Photo caption (not shown): Everyone who has watched Tommy Robinson’s reporting from Leeds must admit that it did not constitute an attempt to interfere with just and proper court proceedings.]

Many were angered in England, Europe and the United States when the British free-speech activist and Islam-critic Tommy Robinson, in the course of just five hours, was arrested, convicted and sentenced to 13 months in prison, and subsequently jailed in a prison in Hull. The conviction was for “contempt of court”, because Robinson was live-streaming from a location outside the court in Leeds, reporting on a rape case.

According to his supporters, the verdict is wrong, and jailing Robinson is in reality due to the British authorities’ desire to shut up a critic for his reporting of inconvenient truths about developments in Great Britain.

But no, say the authorities and the mainstream media — Robinson had been warned, and jailing him is merely an instance of effective enforcement of the law. The only possible relevant aspect of this case is as a textbook example of how “Fake News” can rapidly whip up strong emotions.

The latter is a severe misrepresentation of the case, which certainly does not constitute “Fake News”, although it is quite a bit more complicated than most have presented it — and that includes proponents as well as opponents of Tommy Robison.

So let us look through the background of the recent jailing:

Back in June 2017, Robinson was convicted and sentenced to three months in prison, suspended, for contempt of court, with a trial period of 18 months. He had been filming some of the accused Pakistani men in front of the Canterbury Court building, in a case connected to the rape allegations in the so-called “Grooming Scandal”. During his reporting, he had expressed an opinion about their guilt by asking them questions such as “Why do you rape English girls?”, before the accused had been convicted.

Back then, Robinson was certainly out of line.

The question then is this: Was that also the case on Friday 25th of May in front of the Leeds court building? Was he acting in such a manner that one could say, without doubt, that his reporting constituted an attempt to influence the jurors, or interference with a fair trial and due process?

The only possible response to this question is a clear-cut ‘No’.

Everyone who has seen the reporting Tommy Robinson did from Leeds is bound to acknowledge that it did not constitute an attempt to interfere with the court proceedings. The judge who convicted Robinson could have ascertained this personally by taking the time to go through the reporting.

The absurd assumption behind jailing Robinson for more than a year — that his mere presence and peaceful reporting outside the court building would influence jurors and due process — is obviously absurd: Robinson only gave information that was freely available to anyone reading the public information from the court. He was not physically close to the jurors, and he made no attempt to influence the decision of the court.

Quite to the contrary, Robinson was showing great concern by systematically using the term “alleged criminals” about the defendants. On a similar note, the questions he asked outside the court building to the men accused of rape were only open questions, such as “How do you feel about the charges against you?” and “Are you feeling any remorse?” The latter question was the one that the judge, unreasonably, claimed to constitute an attempt to influence due process and take a position on the guilt question in advance.

Furthermore, even if one accepts the foolish claim that any reporting from a public road in front of a British court building inherently constitutes a “substantial risk” of influencing an ongoing case, the treatment of Robinson is unprecedented: Nobody has ever been sentenced to 13 months of prison for violating a ban of this type.

To make a comparison, if someone is given a suspended sentence for breaking the speed limit, he is obviously only to be jailed if he breaks the law again. Merely sitting down in the driver’s seat is not sufficient reason to jail him. Likewise, Tommy Robinson should also be sentenced to prison only if his suspended conviction for contempt of court is followed by more similar behaviour that has the potential to influence due process at court.

There are many circumstances surrounding the case against Tommy Robinson that should make every alarm bell go off. The very fact that Robinson was convicted in a summary trial — witnesses say that the case was over in just a few minutes — and the refusal to let him choose his defence are by any measure scandals against the rule of law.

But why would the British authorities be so keen on “dealing with” Tommy Robinson? There is no doubt that Robinson is a thorn in the side of the British authorities, whom he tirelessly has confronted with the consequences of the failed British multicultural experiment. That very much includes the incredibly disturbing and vile grooming scandals.

Over the last few years, Great Britain has witnessed a series of rather gruesome rape cases against young girls that take place in Muslim immigrant sections of society. It was subsequently discovered that the police, the legal system and the social authorities had made extensive politically motivated efforts to hide the true extent of these sexual crimes from the general public.

This was due to the fear of offending the Muslim immigrant sections of society by appearing to be racist. It would thus seem that those in power in Britain have, for political reasons, consciously and deliberately repressed information about violence and crimes against young, vulnerable women.

This is also true of the conviction of Robinson, and he has not exactly been quiet about it, just as he continuously and fearlessly has pointed out the significant problems with Islam, multiculturalism and integration that Britain suffers.

This has made him a hugely controversial character — hated by Islamists and so-called “anti-fascists” alike — Anti-fascists always on the spot to create violence and trouble when Robinson speaks in public. But rather than cracking down on those creating the unrest — Islamists and Antifa — the authorities perpetually opt for the easy way out: To shut him up for speaking an inconvenient truth. The recent conviction of Robinson therefore looks like yet another attempt by the British authorities to enforce an authoritarian violation of his right to free expression, in order to deprive those he speaks for from having a public voice.

For this is far from the first case of harassment from the authorities: Back in 2014, he was sentenced to 18 months in prison for having given incorrect banking information regarding a mortgage, a rather brutal punishment for a minor offence. Robinson warned the prison authorities against placing him in a cell with Muslim extremists — which the authorities nevertheless did right away: He was placed in the Woodhill prison in a cell with violent Islamists who — as soon as the cell door shut closed — assaulted him and attempted to kill him.

When in 2014 Robinson was invited to speak at the student society at Oxford University, his social advisor and municipal handlers insisted on limiting what he could say. In particular, they tried to keep him from saying anything about Islam. Later, she put pressure on him to abstain entirely from participating in the event, by implying that they might forcibly remove his children, based on her claim that they had some mysterious wounds on their knees.

The police have repeatedly attempted to put pressure on him by harassing him in front of his wife and his children: In connection with the case last year at the Court of Canterbury, the police woke the entire family up at 3 o’clock in middle of the night, in order to arrest Robinson — this in front of his wife and his terrified kids. An act entirely unheard of, considering the magnitude of the offence and the non-existent risk of escaping trial. The police also appeared at a pub where Robinson was having dinner with his family before going to watch a soccer match. In spite of Robinson’s protests and the pub owner’s insisting that Robinson was a peaceful guest, he was evicted from the pub.

Jailing Tommy Robinson is a direct assault on fundamental principles for rule of law — not least freedom of expression. This assault is even greater because it originates with the authorities, the police and the justice system, who have as their primary responsibility the defence of citizens against arbitrary rule and violations. There is every possible reason to follow the case against Tommy Robinson closely, for it can easily turn out to be the canary in the coal mine. It is a clear example of what can happen when authorities — due to a blend of ill-conceived respect for Muslim sentiment and fear of terrorism — are willing to sacrifice everything in order to maintain peace and order.

Freedom of expression may very well be one of the sacrifices of this process.