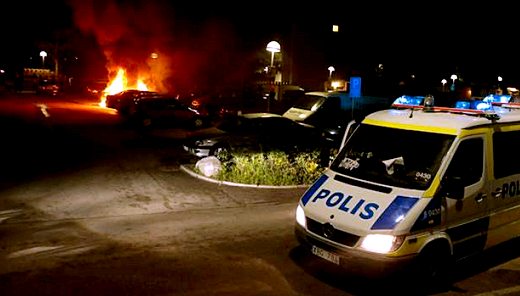 Building work on Sweden’s new police fortress in the ghetto of Rinkeby has been interrupted after an attack early on Tuesday morning (August 7). At 1:31am a car smashed through the gates and onto the building site. The car’s masked occupants leapt out of the vehicle, set it ablaze and hurled flashbangs at security guards.

Stunned guards called for police re-reinforcements, who quickly arrived but were met by a hail of flashbangs and rocks. The fire brigade had difficulty extinguishing the blaze because of the risk posed by exploding flashbangs in the burning vehicle. The attack is believed by police to be in retaliation for a narcotics raid in the Rinkeby ghetto earlier in the evening. It is a clear warning to the police to stay away from Rinkeby.[1]

The new chief of Sweden’s National Unit for International and Organised Crime has called Rinkeby a “war zone” and the high-tech police station under construction there is intended to be an important pivot in the battle by the authorities to bring Rinkeby back under the control of the Swedish state.[2]

Building work on the police station is not an easy job, and it was difficult at first to find a building firm that would take it on. None of Sweden’s largest builders were interested, as it was considered far too dangerous, but a building firm was eventually found and work is slowly progressing under round-the-clock police protection.[3]

When the station is ready it will be an armored fortress, with bulletproof windows, steel plate-reinforced walls and surrounded by a security fence. It is officially designated as a “protected installation”, a classification used by the armed forces for military installations, and it will be secure against sabotage and terrorist attack. Taking photographs of the station will be punishable by a five-year prison sentence.

Working in the station will be a high-risk job. Concern has been raised about security for policemen traveling to and from the station after it has opened, as they are likely to come under attack as soon as they enter the ghetto, and any private cars parked close to the station are likely to be firebombed. A proposed solution is for police to assemble outside the ghetto when changing shifts and be ferried into the fortress under guard.[4]

Last night’s attack is a portent of things to come. The station is going to need all the high-tech protection the beleaguered builders can provide it with.