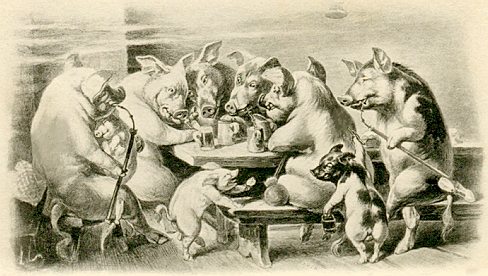 ‘See, I don’t actually have anything against the Muzzies themselves,’ said Rasher, leaning forward and putting his elbows firmly on the table. ‘I mean, at least they’re honest about it.’

‘They are honest, Rasher, they are,’ replied Smokey, in his usual placid tones. It was already past closing time in the small, rundown London pub Smokey had been running for the last fifteen years. Rasher and Smokey, old friends, were the only pigs left that night.

‘They don’t like us, and they admit they don’t like us. You have to respect that. It’s the bloody white people that bother me, Smokey. They pretend to have some sort of affection for us, but they make our lives a misery.’

‘They do create a lot of problems, Rasher, don’t they?’ said Smokey, always conciliatory in conversation. He drained the last of his pint of Guinness, and settled back into his seat to listen to what was clearly going to be another anti-white diatribe from his old friend.

‘If you’re taking some cash out of the ATM and you suddenly realize there’s someone behind you and you look around, who do you want to see — a white person or, say, a Somali? Come on, be honest…’ said Rasher with passion.

Smoky paused for thought and then replied: ‘A Somali.’ ‘Exactly!’ said Rasher, a triumphant look on his face. ‘No pig with half a brain wants to look round and see a white person standing there. God knows I’m not a racist, I’m just being honest, that’s all. Pakis, Arabs, Somalis, fine, whatever. But you never know where you stand with white people. They can just grab you, cut your head off, and chuck it through a mosque window.’

Smoky pulled a face. ‘I’m not sure,’ he said, hesitantly. ‘My mate Feathers is a chicken, and he’s more worried about black people, on the whole. He always crosses the street when he sees them coming. It’s the only way to stay off the menu around Jamaicans, around Nigerians…’. His voiced tailed off. ‘Big problem for chickens, it is, and things are getting worse. He’s had to move house twice this year.’

‘Fair enough, but we’re talking as pigs, right?’ objected Rasher. ‘And as a pig, it’s the white people you have to be careful around. Half a chance, and they’re making bacon out of you and saving your head for extra-curricular activities.’

Smoky took another drag on his cigarette as he stopped to ponder his friend’s words. He knew that Rasher was no racist. Rasher had always tried to take people as he found them, even white people with neck tattoos. But things had clearly reached breaking point.

‘Remember my cousin, Streaky? Minding his own business, he was, walking down the street. Out of the blue, bang, gets smacked round the head by some white guy, stuck in the back of a van. A week later, the Pakis are fishing his head out of their mosque. The white people threw it in there, and it rolled under a cupboard. The Pakis only noticed a few days later when it started to smell,’ continued Rasher, warming to his theme.

Smoky was puzzled. ‘Doesn’t it interfere with their prayers if they’re right next to a pig’s head when they’re praying?’ he inquired. ‘Yeah,’ said Rasher, taking another handful of Scampi Fries. ‘They go straight to hell, their souls get sucked straight out of their bodies with this kind of whooshing noise.’

Smoky grimaced in alarm. ‘I didn’t know that, Rasher,’ he said. ‘No, neither did the Pakis,’ replied Rasher, nonchalantly. ‘Took them a while to figure out what was going on, apparently. Anyway, white people are a menace, there’s no way around it. Think of that nutcase who writes for Gates of Vienna. What’s his name again, the English bloke, El Wotsisname. That thing he wrote about the Somalis was borderline psychotic.’

‘Normally he’s accused of being psychotic, period. If he’s only borderline psychotic now, his medication must finally be kicking in.’

‘Well, be that as it may,’ insisted Rasher, ‘we’ll have to deal with the white people eventually. The Muzzies complain, but they don’t even think about it from our point of view.’

‘Things aren’t as bad as you seem to think, Rasher. An old friend of mine lives in China, and it’s even worse there. They actually take your trotters and — well, I don’t want to go into the details, but it’s pretty bad.’

‘The main problem I’ve had with the Chinese is that they don’t conjugate their verbs properly. What’s this terrible thing that they do with our trotters?’

‘Well, it’s best we not talk about it any more…’

‘No, go on, say! What do they do with our trotters? As long as they’re not bloody well making soup out of them, they can’t be any worse than the white people, surely?’

‘Well, the thing is, Rasher, the Chinese are a bit peculiar, and actually, they do…’

To donate to El Inglés, use the button below.
For previous posts by El Inglés, see the El Inglés Archives.