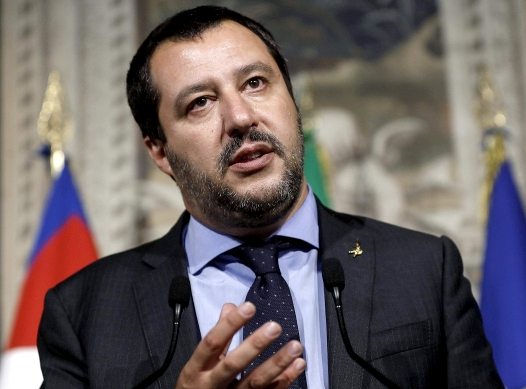 The following interview with Italian Interior Minister Matteo Salvini was published before his meeting with Hungarian Prime Minister Viktor Orbán. Many thanks to FouseSquawk for this translation from the Italian daily Il Fatto Quotidiano:

Salvini: “I want to be tried. The case will boomerang on the prosecutor of Agrigento. I’m sorry for him”

Investigated by Sicilian magistrates for illegal detention, illegal arrest and abuse of power, the interior minister, speaking to Il Messaggero and Libero [newspapers], talks of having received many messages of solidarity and that he will waive immunity. “I want to see how it will end.”

“In Agrigento, everything will come out positively, and therefore I thank the prosecutor because it will boomerang.” For Matteo Salvini, the investigation opened by the Sicilian magistrates regarding the ship, Diciotti, which sees him accused of illegal detention, illegal arrest and abuse of power, “Everything will come out positively,” says the minister to Messaggero. And remembering having received many messages of solidarity, also on the part of judges and prosecutors, speaking to Libero, beginning today there is a signature collection [petition] in his support. To the question of whether he will ask the Senate to say “no” to an authorization to proceed, he responds, “Absolutely not.” If the tribunal says that I must be tried, I will go before the magistrates and explain that I am not a kidnapper. I want to see how this will end.”

Besides the waiving of immunity, he commented also on the choice of the Agrigento prosecutor. “I have only done my work as minister, and am ready to do it again. For the rest, I am sorry for the Agrigento prosecutors. I think that with all the problems that Sicily has, the priority is certainly not to investigate Salvini. And he was the same one who some months ago said, ‘The risks of terrorists on board the boats is high.’ Has he changed his mind?” He then turned to the idea of reforming justice. “But not for the investigation into Salvini — exactly — but because we have millions of trials delayed and this is one of the problems that stops investment in Italy.” He then remembers having received “a tide of messages of solidarity”, and continues:” I believe that (the prosecutors) in Agrigento have misjudged if they thought they could intimidate someone.” Among the many messages of support, there are some from judges and public ministers from various prosecutors’ offices.

As to the opening of a judicial investigation Sunday, also weighing in is vice-premier Luigi DiMaio, who while defending the Lega (Northern League) leader has called for respect for the judiciary. A point on which today, weighing in the columns of La Repubblica, the president of the ANM (Associazione Nazionale Magistrati) Francesco Minisci, who deplores the “union of the togas”, alongside the prosecutor of Agrigento, Luigi Patronaggio, and maintains that Bonafede should support the work of the magistrates: “He who covers institutional duties, in particular the minister of justice, should defend the constitutional prerogatives of the magistrates.” “One thing is certain, underlines Minischi, “as we have already done, we will react every time in which there are attacks on the autonomy and the independence of every single magistrate, from whomever it comes. On constitutional principles, we will not take one step back.” And he adds: “Nobody should be able to interfere in the work of colleagues. If, in the case of the ship Diciotto, crimes have been committed, and in a positive case, whoever has committed them, it must be established who will investigate: This means autonomy and independence for the magistrate(s)”.

Salvini then, in the interview with Libero, spoke of political support in the case of Diciotto. “I am pleased by the words of [Silvio] Berlusconi as well as those of [Giorgia] Meloni. Not so much with representatives of Forza Italia. Hypocrites for the way they are behaving in Parliament”. Turning finally to his relationship with countries of the EU: “ They have shown themselves to be totally absent, deaf, untrustworthy, but because they do it with the Italians’ money, this is the thing that bothers us. Conte has done well in announcing that when they need us, we will pay them back with the same money.” He makes it clear, however, there is no way out. And to the question of whether he will ask the Hungarian premier, Orbán — who he will see in Milan on August 28 — to accept some migrants, answers: “No. I know his position on this point. Just like the position of the Germans and the Austrians. Orbán wants a Europe that controls and protects the external borders. This is our final objective.”

2 thoughts on “Matteo Salvini: I Feel Sorry for the Prosecutor of Agrigento”