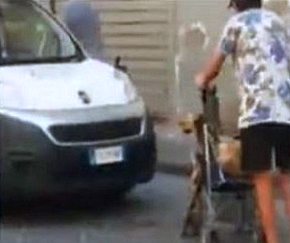 It’s that festive time of the year again: Eid al-Adha, when blood flows in the streets and the laughter of children mixes with the sound of animals screaming in pain.

A culture-enriching boy in Italy was pushing a bound goat in a baby stroller, intending to sacrifice it during the festivities, but a WAYCIST Italian intervened, and the goat’s life was spared. (Vlad says he thinks it’s a sheep, not a goat. And the guy who took the video also says “sheep”.)

Many thanks to FouseSquawk for the translation, and to Vlad Tepes for the subtitling:

Below is the accompanying article from Il Sussidiario, also translated by FouseSquawk:

Islamic Feast, Goat in a Baby Stroller for Slaughter

A goat in a stroller ready to be slaughtered. Storm in Naples for the Islamic feast of sacrifice. A Moroccan is charged with mistreatment of an animal.

[Photo: Goat in stroller ready to be slaughtered]

The polemics continue in Naples for the Eid al-Adha, the Islamic feast of sacrifice, which will continue until Saturday 25 August. The tradition provides for the sacrifice of an adult animal, sheep, cows, and camels. Reporting the incident in Naples was Salvatore Iodice, a counselor, who when he saw a boy with a goat in a baby stroller, confronted him, “Stop — don’t slaughter it.” “I have always done this ceremony in my country, and so I will continue to do it,” the young man declared. Immediately, four police cars showed up, but nothing could change the mind of the Moroccan. In Naples, the citizens continue to be worried about this custom.

Polemics in Naples over the feast of sacrifice celebrated by the Islamic community. The tradition of Eid al-Adha provides for the sacrifice of goats and lambs, through slaughter. Therefore, the worry has grown among residents in the area of Garibaldi Square and animal rights activists. “None of this has happened, though attention has remained high,” assured the representative for immigration, of CGIL Campania*, Jamal Qaddorah, as reported by The Messenger. But the video tells a story that was about to end with the killing of a goat. It was filmed by the counselor of the II Municipality, Salvatore Iodice, who told of seeing a youth with a stroller in which could be seen the legs of an animal. “Alarmed, I got out of the car shouting at the boy to let the animal free, and I called the police who quickly intervened with four squad cars. The boy said that he had always done this ceremony in his country and that it was his intention to continue to do it.” The intervention of the counselor and the police who identified and charged (without taking him into custody) the young man of Moroccan origin for mistreatment of animals, averted the worst.

Naples, Goat in baby stroller ready to be slaughtered

The animal was visibly suffering, and with the arrival of the police, and next by the ASL (Health Department), we succeeded in freeing it,” stated Iodice. The counselor for the Greens then added concerning the Islamic feast of sacrifice: “We are for the freedom of religion, but we don’t permit anyone to torture animals. The police checked the detained persons and called ASL. A report was made for mistreatment of animals.” Francesco Emilio Borelli, also from the Greens, also intervened in the issue: “We cannot permit that in the name of a religious rite they may commit injurious violence against animals. In Italy, violence against animals and slaughter in public are absolutely forbidden, fortunately. A religious rite doesn’t render it legal.” The ritual is explained by Rinaldo Sidoli of Animal Rights Italy: In ritual slaughter, the animal must be conscious at the moment of killing, turned upon itself, and subjected to cutting of the trachea and esophagus to allow the slow bleeding out. It is a cruel practice which should be replaced with alternative methods of electronarcosis.”

11 thoughts on “Goat in a Baby Stroller: A Sacrifice for Eid al-Adha”