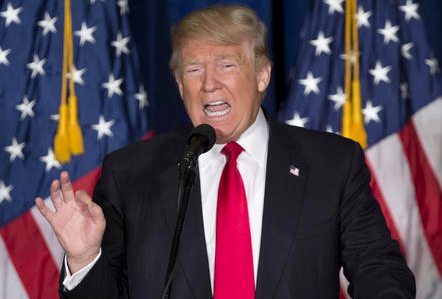 A long essay from 1984 on Donald Trump from The New York Times, no less.

There are so many possible things one could extract from the meandering piece, but on this Fourth of July the following [edited for clarity and spelling] snip seemed most appropriate:

…“The football thing is cute, Trump Tower and the piano and all of that, it’s all cute, but what does it mean?” he says, sounding what borders on a note of uncharacteristic despair.

Asked to explain, he adds: “What does it all mean when some wacko over in Syria can end the world with nuclear weapons?”

He says that his concern for [a] nuclear holocaust is not one that popped into his mind during any recent made-of-television movie. He says that it has been troubling him since his uncle, a nuclear physicist, began talking to him about it 15 years ago.

His greatest dream is to personally do something about the problem and, characteristically, Donald Trump thinks he has an answer to nuclear armament: Let him negotiate arms agreements — he who can talk people into selling $100 million properties to him for $13 million. “Negotiation is an art”, he says, “and I have a gift for it.”

The idea that he would ever be allowed to go into a room alone and negotiate for the United States, let alone be successful in disarming the world, seems the naive musing of an optimistic, deluded young man who has never lost at anything he has tried. But he believes that through years of making his views known and through supporting candidates who share his views, it could someday happen.

He is constantly asked about his interest in running for elective office. Absolutely not, he answers. All of the false smiles and the red tape. It is too difficult to really do anything.

He dislikes meetings and paperwork and is in the enviable position of being able to avoid both.

Well, it took more than thirty years before The Donald changed his mind, rolled up his sleeves, and decided it wasn’t too difficult after all. Now it’s “President Trump”, if you don’t mind… and I don’t. As he transformed New York real estate in that period, perhaps he will transform Washington politics, finally beginning the overdue change of the socialist skyline and the swamp begun under FDR. We can only hope he’ll have enough time.

Meanwhile, Trump continues to lead in crucial domestic areas: his executive orders (a practice his predecessor used to move our country leftward) have, for instance, made it easier to fire incompetent civil servants, and harder for immigrants from terrorist countries to gain entrance (not all of those countries are majority-Islam, despite what the news says).

And then there is his appointment of federal judges. You can see from the wiki that many of those appointments languish in the bowels of our legislative branch. Makes you wonder what they will do to his eventual second choice for the Supreme Court. Have no doubt: it will be brutal.

There’s a great deal to ponder in this, the 242nd year of our independence. To paraphrase Benjamin Franklin’s harried answer a woman’s inquiry at the time they were hammering out the details: “it’s a republic, madam, if you can keep it.”