Our Dutch correspondent H. Numan sends this report on the latest political news from The Netherlands: the appointment of a commie chick as the mayor of Amsterdam. 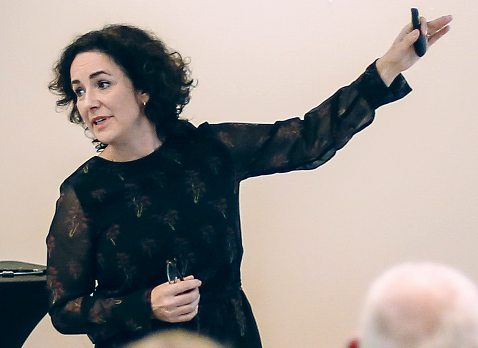 Welcome to the islamic people’s republic of Amsterdam

Amsterdam lost its mayor Eberhard van der Laan; he died last year. Eberhard was temporarily replaced by Jozias van Aartsen. This gentleman was the mayor of The Hague. Under his capable administration that city acquired its first banlieues. He continued the good work in Amsterdam. Until a new mayor was appointed, which is now. Habemus papam, we got one! It will be Femke Halsema. She was leader of Green Left, and that party won the elections.

Now, that looks clear enough, and democratic on first sight. But in Holland most things are somewhat different on second sight, especially in politics. Not everything is what it seems. We have municipal elections, and you vote for persons, not for parties. So far, so good. Here comes the snake in the grass: you can’t vote for a mayor. Or even which alderman actually represents you in the city council.

That is decided beyond firmly closed doors by the parties. Yes, it’s possible for a popular politician to be elected with preferential votes, but that’s not the norm. Everybody in The Netherlands knows “had-je-me-maar”. Roughly translated as ‘you wished you got me’. His real name was Cornelis de Gelder, and he was a tramp with a severe alcohol problem. He ran in 1921 for office, more or less as a joke. He was elected nevertheless. Back then the people were just as fed up with back-room politics as we are today. (He never took his seat in the council, as he was sentenced for drunkenness to a rehabilitation clinic prior to his election.)

So it does happen, just not often. The normal procedure is that the most the likely parties get together and negotiate a deal. As long as it pleases the lords regent, that is. In Rotterdam the party Leefbaar won by a landslide and was boycotted out of office. That’s how the council is formed. Electing a mayor is a very different story. Mayors in The Netherlands aren’t elected, but appointed by the king. The king himself doesn’t decide who becomes mayor; he merely appoints the preferred candidate. Not even the national parties do that. Though they, of course, are in the know. It’s the local parties who decide. Again, behind firmly closed doors. Who, what and how that is decided is none of your business! In fact, when a journalist got hold of information about the new mayor of ’s Hertogenbosch, the city filed criminal charges with the Rijksrecherche (our FBI).

Amsterdam has always been a bit different. It was the last city to join the revolt against Spain, for example. It always had strong communist and socialist parties. Since WW2 the mayor has always been a socialist. That’s a bit difficult now that party is in severe decline. The new kid on the block is GreenLeft (former communist party), which won the municipal elections.

GreenLeft calls the shots. They immediately boycotted a council with FvD and the VVD in it. They wanted, and got, a near-communist council. Of course they invited everybody who cared to apply for the position of mayor. In real life, Rutger Groot-Wassink, the leader of GL Amsterdam, is the kingmaker. He decided the next mayor must be a socialist or better, and a woman. No one else needed to apply. With hope of succeeding, that is. Who is Groot-Wassink? If you search online, you won’t find much. He prefers to operate in the shadow behind the scenes. He represents the extreme left wing of GL. If you’re looking for a possible/likely link between Antifa, anarchism, vegan terrorism and jihad, look no further. I can’t accuse the man of anything, but he’s a very likely candidate to begin your research with.

Now about Femke Halsema. If there was an Oscar for hypocrites, she would easily win it. She resigned from politics exactly one day after she was entitled a full parliamentary pension. Dutch parliamentarians who serve twelve years or longer get a full pension. She retired mid-term the very next day.

Femke has a hobby. She likes old cars. A bit unusual for women, but there you go. Her favorite is not a Trabant, as you might expect, but a good old Mercedes 200 Diesel. The real thing, without filters. She much prefers that old rust barrel over the party-provided environmentally correct Toyota Prius. That’s a tad hypocritical, to say the least. Because caring for the environment is the cornerstone in ‘green’ politics. But, as GL stated, “that is a non-political issue”. A bit of old hat now, she sold the old rust barrel some years ago. Point is, that GreenLeft absolutely loves to pester anyone with an old car — except for the nomenklatura.

Femke is the proud mother of two lovely children. A boy and a girl. They were send to a ‘black school’, of course. A ‘black school’ is the name for schools with a majority of colored children on it. Nowadays, muslim children. Those schools are usually in the poorer areas of cities and produce very bad results. Her children were harassed by aforementioned followers of the religion of peace. So what do you do? You move ’em out, pronto. That’s exactly what Femke did . Again, I don’t begrudge her the freedom to do so, but it’s somewhat hypocritical. Her arguments were impeccable. Just a pity she and her party don’t allow others the same freedom.

Amsterdam got finally a new working metro line, the north-south line. Our new lord mayoress will graciously open it. The celebration party costs just half a million euros . As long as it isn’t your money, who cares?

And lastly, when she cashed in and retired, she solemnly promised not to return to politics, no matter what. No senator’s seat for her, nor a mayor’s chain. Until she was offered the one chain that rules them all.

This lady is going to govern the biggest city in The Netherlands for at least six to ten years. In The Netherlands the mayor is pictured as ‘prima inter pares’. He or she is no more than the leader of the council. In real life, the mayor is head of the “triangle”. He’s the head of civilian authority, together with the chief of police and the district attorney. He controls the civilian administration in his town.

So in real life, Amsterdam just converted into a people’s republic. An islamic people’s republic, mind you. The only thing lacking is a muslim mayor, but Arnhem and Rotterdam make up for it.

By the way — since that election in March, a lot has changed for the worse. The PVV is effectively muzzled. The referendum law was abolished this week in the senate. Things are not looking good.