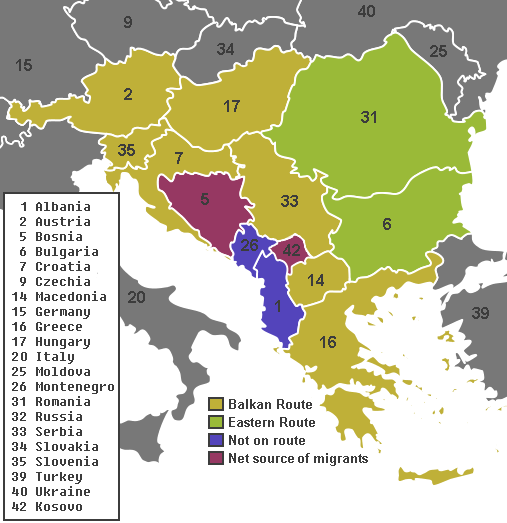 The following video from Bulgarian TV discusses the recent massive reduction of the flow of migrants into Bulgaria. We know there are still hundreds of thousands of “refugees” eager to get to Western Europe, particularly Germany, but they’re no longer using Bulgaria as a transit camp. So where are they?

The Great European Migration Crisis began in 2015 with a huge flow of illegal immigrants through the Greek islands to the mainland, and thence to Macedonia, Serbia, Hungary, Austria, and Germany. When Hungarian Prime Minister Viktor Orbán closed his southern borders, the flow was temporarily stymied, but soon took a detour through Croatia and Slovenia to get to Austria. Over the next year or so Austria worked with Slovenia and the Balkan countries to cut off that route, too. But the people-smugglers were not deterred; they rerouted their charges to the longer and more expensive route across the Mediterranean to Italy, using the (free to them) NGO “rescue” vessels to ferry their charges on the last leg of their journey.

The Italian political system was unable to withstand the migrant load, and this year an anti-immigrant coalition was finally ushered into office by the voters. Italian Interior Minister Matteo Salvini is currently living up to his campaign promises and refusing to allow the NGO ships to land in Italy. The flow of migrants into Italy has been reduced by 80% so far this year.

Recent news stories indicate that at least some of the flow has been redirected to Spain, aided and abetted by the new leftist government in Madrid. However, there have been warnings for months that a huge cohort of migrants had assembled in the Balkans — some reports put the number at 80,000 — in the expectation of getting to Austria by passing through Albania, Montenegro, Bosnia, Croatia, and Slovenia. That new route may well be where most of the Bulgarian traffic has relocated to.

Many thanks to Tanya T for the translation, and to Vlad Tepes for the subtitling:

2 thoughts on “The “Refugee” Tide Ebbs in Bulgaria”