The latest from Kretinostan, sent by our Swedish correspondent LN.

We all know that Islam is a wacky, distorted and crazy pseudo-religion.

What we did not know, and neither did the mohammedans themselves, is that they all must be killed most painfully or inevitably decapitated because they commit on a daily basis the worst sin of all: putting a partner alongside Allāh.

This is called shirk, that is, faith in more than one god, polytheism, or to value something as highly or more highly than Allāh, something that within Islam is the only sin for which forgiveness is not possible.

Allāh the exalted says, “Allāh excludes them from paradise who put a partner alongside Allāh’s and the fire shall be their last residence.”

Listen to what one of the West’s leading experts on Islam, Dr. David Wood, has to say about the phenomenon.

For publishing the illustration below on Facebook a 36-year-old Swedish woman is risking
up to two years in prison (see anarcho-tyrrany).

How to construct a muslim: 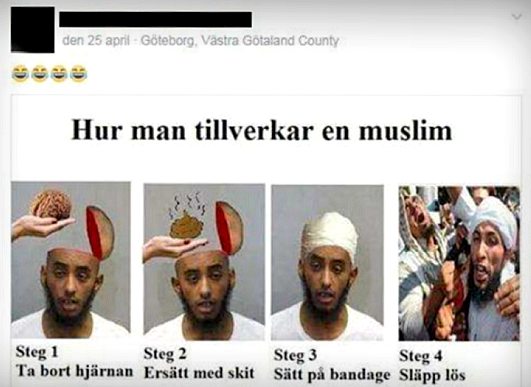