German Interior Minister Horst Seehofer has recently announced his opposition the immigration policies of the CDU, his coalition party in the government headed by Chancellor Angela Merkel. Mrs. Merkel reportedly rejected his demand for a new migration plan, and, surprisingly, the CDU representatives at the coalition meeting supported Mr. Seehofer rather than the chancelloress.

Egri Nök has compiled a report on what may be the beginning of the end of Angela Merkel’s political career. 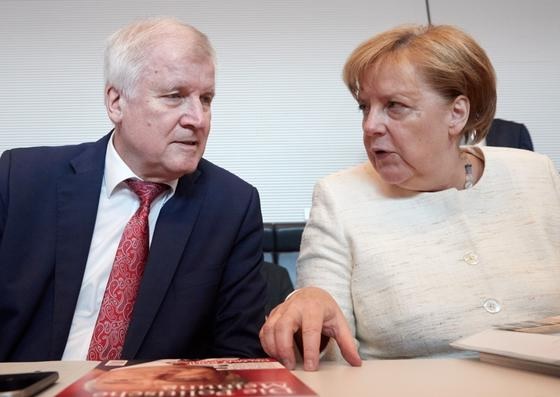 Is Angela Merkel About to be Putsched Out of Office?

Horst Seehofer had recently been working on a paper dubbed “Migration Master Plan”, containing steps that he suggests be taken in what is known as the “migrant crisis”. It was announced that he would present the paper on Tuesday June 12th.

On Sunday the 10th Angela Merkel said in a live TV talk show, when asked about Seehofer and his “Migration Master Plan”, that she wanted to “apply European law”, instead of “acting in a national and unbalanced way”. She said: “I want EU law to have priority over national law.”

Yesterday Seehofer’s office cancelled the Tuesday press conference where he was to present the paper. It was reported that Merkel had refused to accept the paper’s proposals to turn away at the border “refugees” who demand entry to Germany but:

Yesterday Seehofer’s office cancelled his attendance at the “Integration Summit” scheduled for today, Wednesday the 13th. This “summit”, which Merkel created in 2006, is an annual event where “diversity” lobbyists and activists present suggestions and make demands to the Interior Minister. This is the first time that the Interior Minister has not attended. Seehofer announced that he would be meeting Austrian Chancellor Sebastian Kurz instead.

His cancellation was announced with reference to his schedule. When pressed by journalists, however, he produced a photocopy of a text written for the notorious Amadeu Antonio foundation by one of the attendees at the “summit”, wherein she accuses Seehofer of “blood and soil” philosophy and of “not understanding that Heimat (‘home’, also ‘interior’ in the title of Interior Minister) means diversity”.

Yesterday evening Kurz, who was then in Berlin and was meeting with Merkel during the day, said to the German press that he didn’t want to interfere in German affairs. But that “it is decisive that we stop people from trekking all across Europe to apply for asylum in Germany and in Sweden. This is not in accordance with the Dublin regulations.”

At the same time last night, a meeting was held between the CSU and the CDU fraction, in which, according to participants, both the CSU and CDU representatives unanimously supported Seehofer and demanded that Merkel give her consent to Seehofer’s propositions. Merkel seems to have confirmed that she was not going to do that.

Neue Zürcher Zeitung comments on Kurz’ statement and on Seehofer’s and Kurz’ meeting today: “Europe is beginning to stand in solidarity — but not in a way that Merkel might like.”

10 thoughts on “Is Angela Merkel About to be Putsched Out of Office?”